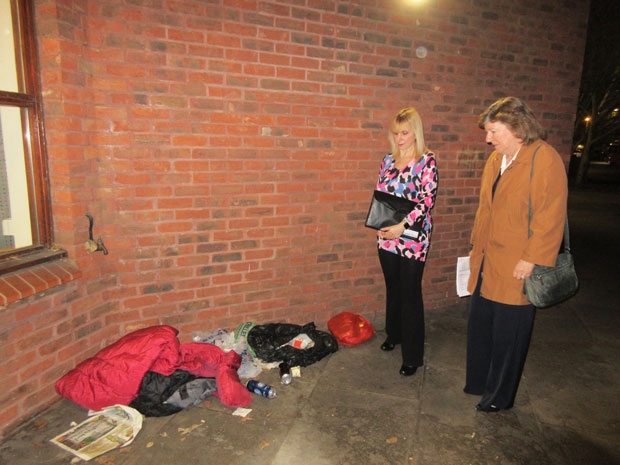 After an angry forum meeting inside the library (9.1.2019) – when residents pleaded for action against anti-social behaviour – the Barnet Society took the forum chairman and vice chairman, Councillors Lisa Rutter and Alison Cornelius, outside the building to show where one of the rough sleepers had laid out his sleeping bag.

Residents accused Barnet Council of abandoning High Barnet and failing to take any steps to tackle street drinkers and rough sleepers who congregate outside the library, in the High Street and Church Passage.

Councillor Rutter gave an undertaking that action would be taken across council departments to deal with the rough sleepers’ encampments outside the library and also on the grassy slope beside the Spires shopping centre bus stops and in shop doorways along the High Street.

“What is happening with the homeless is very sad to see. We want homeless people to get help, but we must take action and firm up the council’s response.

“We will inform Barnet Residents Association on what can be done to improve liaison with the Police and co-ordinate action by the Safer Neighbourhood Team,” said Councillor Rutter.

A petition calling for action to stop rough sleepers gathering around the library was presented to the meeting by the Association’s representative, Gordon Massey, who said that nearby residents in Carnarvon Road were at their wits end because of rising anti-social behaviour which included men urinating and defecating in the bushes in the library gardens.

There were usually at least three homeless men sleeping there each night, but during the day they attracted up to half a dozen street drinkers who were intimidating young mothers when taking their children to school.

“Local residents are sympathetic to the men’s plight, and some do give them bedding and money, and efforts have been made to entice them away, but they are resistant to being helped and prefer to stay where they are.

“They moved to the library when an exclusion order was issued for the bus stop area, and all they had to do was move fifty yards across the road. This has been going on for months.”

Mr Massey was immediately backed by several Carnarvon Road residents. One demanded action: “We live opposite and my three and six-year-old boys can’t look at the men, especially when street drinkers join them, and they all hang around in an intimidating way.”

Another nearby resident said she had spoken to the men and they had explained how they’d become homeless.

Local residents are sympathetic to the men’s plight, and some do give them bedding and money...

When challenged over the council’s failure to take legal action to evict rough sleepers from council land, Councillor Rutter promised she would speak personally to the council’s strategic director for the environment.

A second petition from Barnet Residents Association, presented by Ken Rowland, called for improvements in street cleaning in the High Street and adjoining roads.

Mr Rowland praised the efforts of the High Barnet’s dedicated street sweeper but said there was no street cleaning at all in some of the roads adjoining the High Street.

He was supported by Mr Massey who asked Councillor Rutter why High Barnet was never visited by the council’s pavement washing machine. “There are terrible stains on the High Street pavement.” He also called on the council to replace the High Street’s rusty and broken cast iron refuse bins with bins of a more functional design.

Councillor Rutter promised she would ask the relevant council departments to see what could be done to improve the High Street.

She gave a similar undertaking to examine complaints about renewed fly tipping along St Albans Road.

Mr Rowland said action had been promised last September but St Albans Road was in a worse state then ever with the verges littered with old fridges, three-piece suites, mattresses and builders waste.

Mr Massey said the roadside was thick with bottles and cans and it was no wonder the area attracted fly tipping, but St Albans Road was far cleaner and tidier after the Hertsmere boundary.

“The reason is quite simple. Hertsmere send out teams several times a year to clear the rubbish, but Barnet Council does nothing and the mess there is an advertisement that is a dump for fly tippers.”