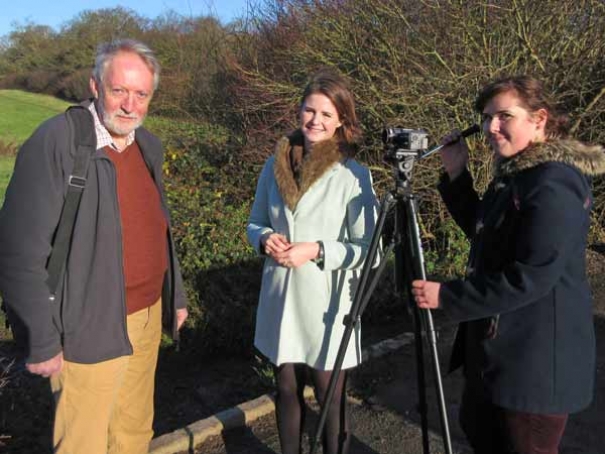 Robin Bishop, with Alex Marshall (centre) and Terri-Ann Williams, looking north across the green belt
High Barnet’s much-coveted green belt is to be featured in a seven-minute television documentary being filmed by students from City University’s department of journalism.

Their assignment is to explore the pressure to develop green belt land around London, given the growing demand for new housing.

Alex Marshall and Terri-Ann Williams, who are both students on an MA course in TV journalism, travelled out on the Northern Line from Angel; they were amazed to see so much countryside there was once the tube train left West Finchley.

“We have to admit we’d never been all the way to High Barnet before, and we found the views from the tube, especially after Totteridge, were really stunning.

No wonder local people make such a fuss about preserving the green belt,” said Ms Marshall.

The two students had asked the Barnet Society to give them a local tour and explain why protecting the green belt was considered such a priority.

Their first stop was Cavendish Road looking across the green belt countryside to the north of the town.  Cavendish is one of several roads, along with Byng Road and Grimsdyke Crescent, that end abruptly and were originally planned to extend further north until house building was halted by the Second World War and the land was designated green belt.

Robin Bishop, who leads on planning and environmental issues, explained why the Society considered it so important to preserve a green lung of countryside between the M25 and the northern boundary of High Barnet, Arkley and Cockfosters.

Next stop was in Barnet Gate Lane, looking across at a site in Hendon Wood Lane where there is unauthorised storage of building materials and vehicles on what was once ancient meadow-land and is part of the green belt beside Dollis Brook.

Barnet Council is being encouraged to enforce planning regulations and get the site cleared, but it has been an uphill task, and Mr Bishop described why attempts at gradual infilling of protected land posed a constant challenge

He insisted that the Society was prepared to support building projects that were in keeping with the green belt and that respected and preserved the countryside, but he and his team had to be constantly on their guard when developers tried to eat away at protected land.

The final filmed sequence was in Mays Lane, where the two students were shown new houses being built on the Dollis Valley estate; they were able to see for themselves how the density of homes was being increased to cope with the pressure for new housing.

“We wanted to come to High Barnet to see what is at stake. We knew from the Barnet Society’s website how important the green belt is to local residents but we also want to consider whether it would be right to extend into the green belt given there is such a shortage of new houses around London,” said Ms Marshall.

More in this category: « Dr Gear invested with the Order of the British Empire Da Capo Concert Band »