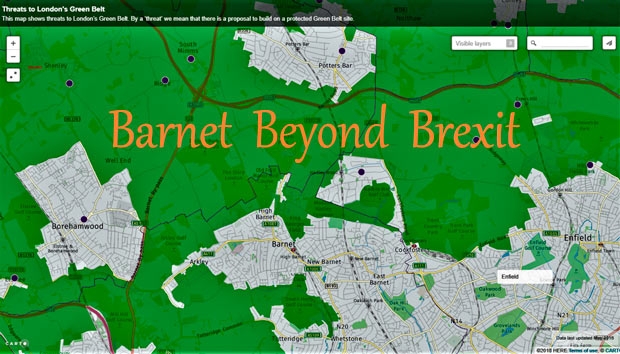 Chipping Barnet’s Green Belt. Purple dots represent proposed housing developments in it.
Chipping Barnet is surrounded on three sides by Green Belt – virtually unspoiled open countryside from Hadley Wood in the east to Whitings Hill in the west and south along the valley of the Dollis Brook. Together with substantial areas of Metropolitan Open Land (such as Tudor Park), surviving farmland (such as the Whalebones estate), several attractive parks and many street trees, we are lucky to have so much greenery. It helps give our area its special identity.

On Thursday evening 7 March, about 140 residents packed the Barnet Society’s public forum at Christ Church to ask questions about the big changes likely in Barnet over coming years in how we live and work, and how we prepare our young people – and retrain our oldsters – for both; and the physical consequences for our surroundings.

In his web post on 8 March, Nick Jones summarised the debate on education, training, employment and the proposed Whalebones housing development. Houses and green spaces were also a major theme of the evening.

I opened the session by reminding the audience that the Barnet Society was founded to protect the Green Belt and the best features of our area, from Arkley to New Barnet. However, we don’t oppose all growth and change. And we do support high standards of building and landscape design in the right places. But the challenge is getting greater.

To meet forecast household growth, Barnet plans to build some 3,000 new homes per year until 2025. If High Barnet, Underhill & Oakleigh wards take their share, roughly three more Dollis Valley developments will be needed by 2025, or another five Victoria Quarters.

That’s not all. The Mayor of London is proposing high-density housing above and around our stations, and for planning relaxations within 800m of them – i.e. most of our neighbourhood. 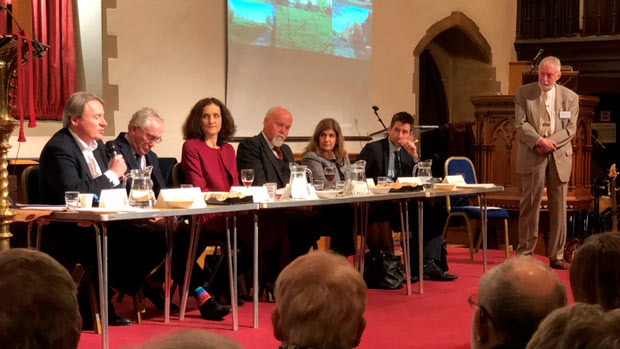 That could mean many more back, side, roof and basement extensions, and new houses in back gardens.

Such developments can only be checked if Barnet’s own Local Plan sets out better alternatives for where and how we build.

But where else can homes be built? Barnet’s brownfield land register totals over 400 hectares (about 1,000 acres), but less than 1% of that is located in our local area.

What’s left but our green spaces? – many of them supposedly protected as Metropolitan Open Land, Green Belt or Conservation Areas.

So I put this question to three of the panellists with a particular interest in housing and green space:

Would you confirm your commitment to retaining Barnet’s existing Green Belt in full? 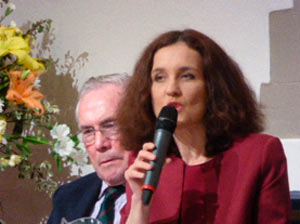 Theresa Villiers confirmed that she is committed to preserving the Green Belt, and so is the Government.

She would review the housing targets, but agreed that we must build more homes for young people.

She believed that we can develop the new homes without building on the Green Belt.

We needed to identify regeneration areas and brownfield sites for high density housing in other parts of Barnet. 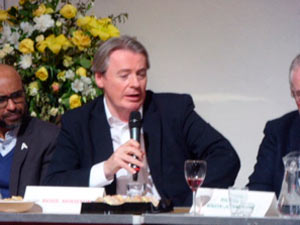 Ross Houston said that this is a real challenge in London, and failure to build housing in London is a major planning failure. He and the Mayor of London are all adamant that the Green Belt and other open spaces should be preserved.

He commented that open space can be reclaimed, as has been done successfully in the Lee Valley.

He said that the housing targets are challenging, and most will be built in the west of the Borough. His biggest concern wss that housing must be genuinely affordable. We must preserve the character of our town centres.

Planning laws have been relaxed too much. Medium-density housing schemes in streets and squares, as promoted by the organisation Create Streets, can produce much more acceptable design. For example, 500 units could be built on top of and around Finchley Central Station, minimising the need for roads and car parking space.

He also confirmed  that the local political parties are currently looking at the London Plan and Barnet’s Local Plan. We must get these right. 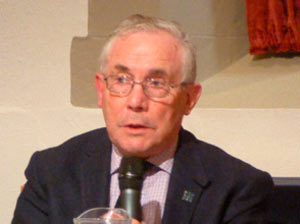 Richard Knox-Johnston queried the government’s estimate that 300,000 new homes are required. Where did that figure come from? The National Audit Office’s report last month Planning for New Homes questioned both the method of calculation and the ability of the planning system to deliver it. The media did not cover this.

He also expressed the CPRE’s & LGBC’s concern that since 2016 over 200,000 new dwellings have been proposed for London’s Green Belt – which is intended to be protected from any development except under exceptional circumstances.

But CPRE research has shown that there is more than enough brownfield land within the affected local authority areas to accommodate at least 260,000 homes.

He said it was a delusion that building in the Green Belt provides affordable homes. Developers and some politicians promise young people they will build homes for them on the Green Belt, but there is no evidence that, of those developments in London’s Green Belt, any have been affordable.

This is because developers say they cannot make 20% profits on a site, so will not provide affordable housing. Government policy is responsible for the lack of affordable homes, and it must take action to ensure this does not continue. Civitas has reported that the UK has an affordability crisis rather than a housing shortage.

He also observed that the Green Belt is becoming a critical issue in local politics. A number of local authorities have postponed progress on their Local Plans until after the May local elections. Last year, the Conservatives nearly lost control at Tandridge District Council in Surrey, partly as a result of threats to the Green Belt.

Councillors have more power than they realise, he pointed out. The Planning Inspectorate cannot force Green Belt releases, they can only recommend; the final decision is for Local Councillors.

Rounding off, Richard Knox-Johnston said at there is increasing evidence that physical and mental wellbeing is significantly improved by contact with nature. In the future, for example, GPs could prescribe exercise in the Green Belt instead of medication. 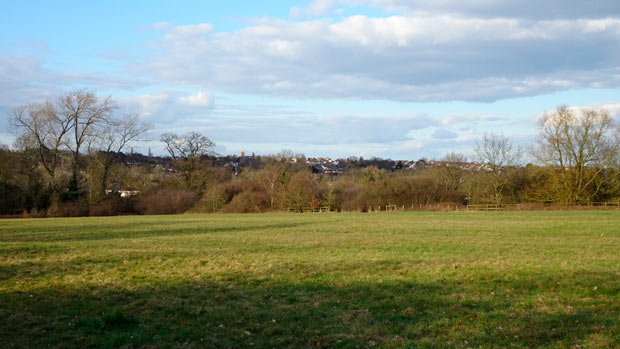 A couple of after-thoughts from me: