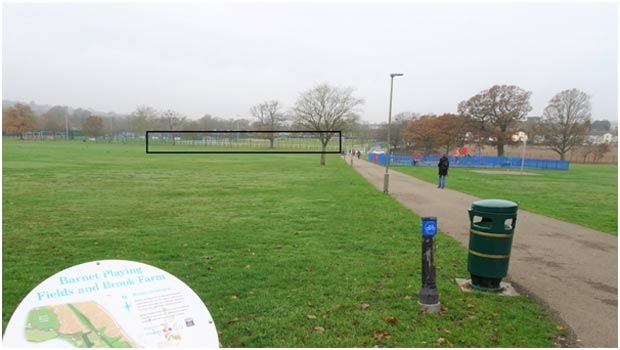 The first consultation was carried out last summer with no plans and very little publicity.

Phase 2 consultation took place last autumn, and contained a draft master plan for two new sports hubs, and for a new community café and additional play facilities on Barnet Playing Fields. In December the Barnet Society submitted a response, but received no feedback.

The latest consultation closes on 28 July. The draft master plan shows the skate / BMX park in a better position, but otherwise differs in only minor respects from the previous one. Most of our previous comments therefore still stand.

The Barnet Society welcomes the Council’s intention to restore Barnet & King George V Playing Fields, and to widen public access by providing a café with toilet facilities and play areas for children and their parents or carers. The present playing fields have historic, environmental and landscape value.

The Barnet Society could support the right kind of building, the right landscape features, in the right place, and to high standards of design and environmental quality. But the published scheme does not so far demonstrate any of these. Nor is its financial viability clear.

The Society Committee opposes the current proposals. Our basic objection is that the playing fields are within the Green Belt, which Barnet Council, the Mayor of London and the Government are all committed not to build on – and which the Barnet Society was founded to protect.

The National Planning Policy Framework (NPPF, February 2019) allows development of the Green Belt only in very special circumstances. The only exceptions allowable include:

the provision of appropriate facilities (in connection with the existing use of land or a change of use) for outdoor sport, outdoor recreation…

but the NPPF lays down a crucial condition:

…as long as the facilities preserve the openness of the Green Belt...

Barnet Council’s own commitment to the Green Belt is set out in its Local Plan:

We will create a greener Barnet by: protecting open spaces, including Green Belt and Metropolitan Open Land…

Only six weeks ago, the Council demonstrated its commitment by refusing permission for 230 square metres of stables off Mays Lane.

The Council’s proposed building on Barnet Playing Fields would be five times the area of the stables and twice as tall. To permit it would be a flagrant breach of the Council’s own policy and set a dreadful precedent for other developers, who are queuing up to build on the Green Belt.

We have submitted a response to the consultation that covers this and other issues in detail.

The buildings proposed may be justifiable but they are in the wrong place. No attempt has been made to devise an overall plan for the area that makes best use of facilities in The Totteridge and Ark Pioneer Academies, the Table Tennis Centre, Hadley Wood Trust and the old cricket pavilion.

We also question several aspects of the landscape scheme, including the location of the proposed footbridge, fences around the Gaelic Football pitch and another multi-use games areas area, more artificial surfaces, parking for 66 cars, and yet more street and floodlighting – all of which will diminish wildlife in the area.

To the west and south along the Dollis valley, and elsewhere in Barnet such as Tudor Park, sports and community facilities have been built in the past with the best intentions, but have been under-used and left to decay. It would be stupid and irresponsible not to learn those lessons. A rethink is essential.

The proposals can be seen at:
https://engage.barnet.gov.uk/draft-masterplan-barnet-kinggeorgev-3 and at these venues:
Thursday 25th July 12pm – 4pm Rainbow Centre
Friday 26th July 10am – 1pm By the playground at Barnet Playing Fields

Have your own say before Sunday 28 July by completing the online questionnaire or writing to:
Greenspaces, LB of Barnet, North London Business Park, Oakleigh Road South, London N11 1NP.

More in this category: « Residents criticise “inhuman” conversion to studio flats Design of quality proposed for Whalebones – so why does the Barnet Society oppose it? »