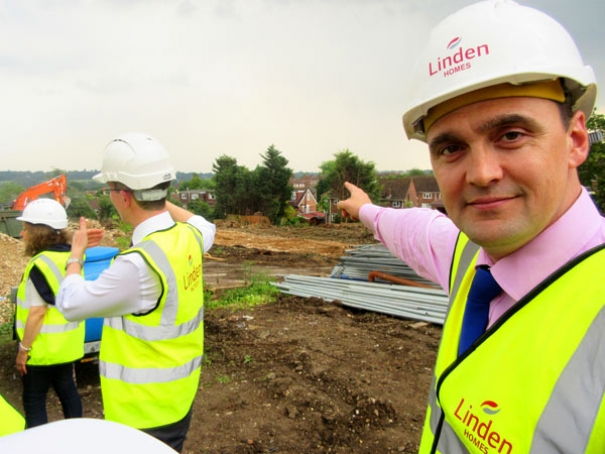 Shawn Moore, construction director, at the Elmbank housing development, says the steep gradient of the site, looking across Dollis Valley, presents quite a challenge
Building houses and apartment blocks along a narrow, sloping 3.9-acre site, where the land falls sharply by 15 metres, is not a “builder’s dream” says Linden Home’s construction director Shawn Moore.

He gave a rundown of the challenges facing the contractors when local residents were shown round a site that will provide 114 new homes at Elmbank, one of High Barnet’s largest housing developments in recent years.

Demolition of formers nurses’ homes and other derelict buildings is nearly complete, and construction work is due to start in July, with a completion date set for the summer of 2018.

A new road through the Elmbank development will extend from Barnet Road, opposite the Arkley public house, to just north of Barnet Hospital buildings, and on either side will be a total of 21 houses and apartment blocks containing 93 flats.

Mr Moore said that after initial building work at the Barnet Road end of the site, the infrastructure for the development will then be installed running up the site from the Barnet Hospital end.

“A long, narrow site with a steep, 15-metre fall is not a builder’s dream, and although we will start construction along Barnet Road, the internal services will be built from the bottom to the top where we will bring in all the services, such as water, gas and electricity.”

Infrastructure should be completed by October and a show home ready in November. The site will include 24 affordable two-bed apartments, sited at the hospital end of the development; 14 will be for rent, and ten in shared ownership. 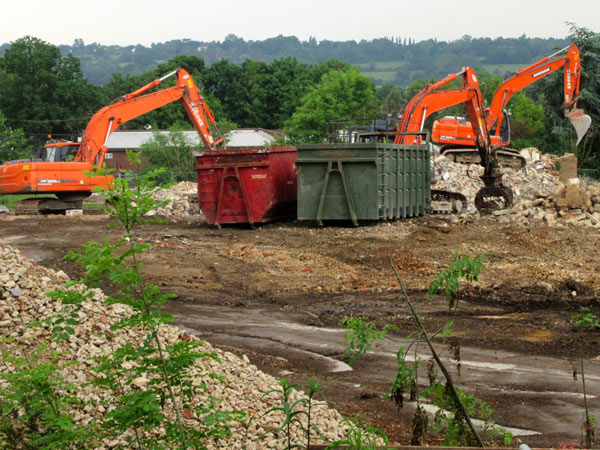 Despite having lain derelict for years, Elmbank – once the site of Elmbank House – does contain numerous mature trees which are covered by a series of protection orders. The new road through the development has been routed so as to ensure their preservation.

“These trees probably date from the 1850s and they are magnificent specimens and will be a real feature of the new development.

There is also a line of oaks classified as veteran trees alongside the boundary with Whalebones Park and they too will be preserved.”

Some residents of Elmbank Avenue have not been so fortunate and many smaller trees that formed their boundary with the site have been felled, but Mr Laugharne said these self-seeded trees would be replaced with new planting. 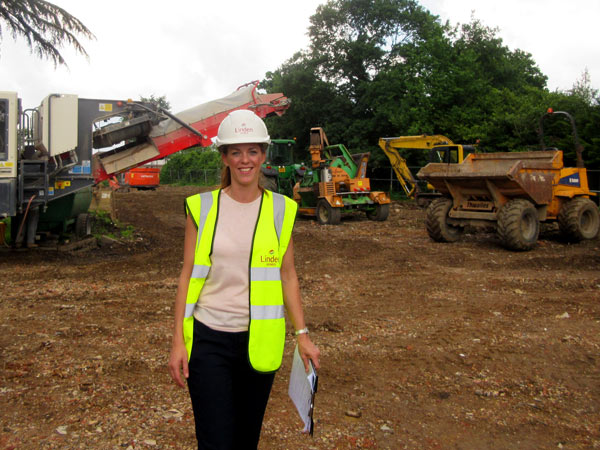 Linden Homes is a member of the Considerate Constructors’ Scheme and will follow recommended working hours of 8am to 6pm on weekdays; 8am to 1pm on Saturdays; with no working on Sundays or bank holidays. All contractors’ traffic to and from the site will be via the Barnet Road and the A1.

Mr Moore’s responsibilities as construction director include supervision of other nearby Linden Homes’ developments, including the Studio Way development in Boreham Wood, and other developments at Mill Hill and Welwyn Garden City.

“Linden Homes is the fifth largest house builder in the UK and our aim is to provide developments in a traditional character that are in keeping with the local area and our construction projects have won numerous awards.”