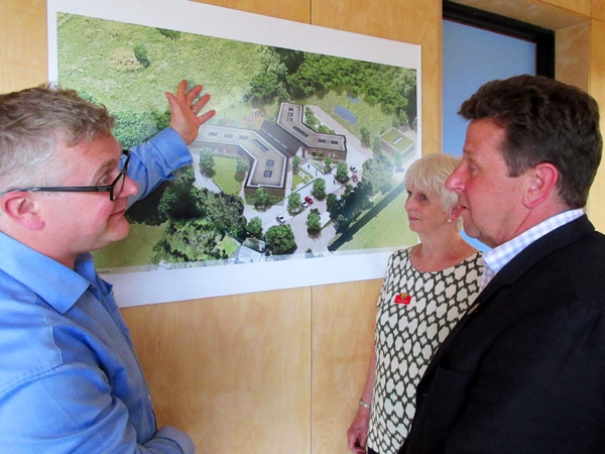 Architect Barnaby Johnstone (left) with trustee Mary O’Toole and the charity’s chief executive Ru Watkins
A radical redesign has been unveiled of the proposed new Noah’s Ark children’s hospice to be built at the environment centre off Byng Road, Barnet.

Under the latest plan – to be submitted in July for Barnet Council’s approval –  the children’s bedrooms and family rooms would all look out on to woodland and gardens.
Instead of a single rectangular doughnut-shaped block with a central courtyard, there would be an X-shaped building with four wings leading off from a central entrance and reception area.

The new building is slightly lower than the previous design, but has a slightly larger footprint.

So far Noah’s Ark has raised £5.34 million towards the £7.91 million needed before construction can start, and the aim is to start work on the hospice next year with the hope of it being completed by the autumn of 2018.

Barnaby Johnston, director of architects Squire and Partners, told the Barnet Society, that the redesign ensured that the bedrooms and family rooms were outward facing, taking full advantage of the outlook provided by the nature reserve. 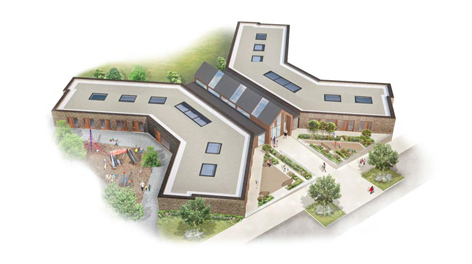 Leading off from the main reception area, in the shape of a butterfly, would be a wing containing six children’s bedrooms; a wing containing three family rooms for visitors, and nursery facilities; a wing with therapy play areas with soft and wet games, and a children’s den; and a wing providing offices for the charity.

“The central space would be the reporting point for key workers who help children out in the community, and the whole aim of the redesign is to take as much benefit as possible from the outlook provided by a seven-acre nature reserve.”

Mr Johnston said that at the front of the building, alongside the approach road that is a continuation of Byng Road, there would be off-road parking for 24 cars.

Discussions about the revised plans have already been held with Barnet Council’s planning department, and Noah’s Ark hoped to obtain planning approval by mid-October.

When the redesign was displayed at the newly-completed environment centre for the benefit of local residents (7.6.2016), Ru Watkins, chief executive of Noah’s Ark, said the charity was anxious to work with the community.

Every effort would be made to reduce congestion. Family and activity days at the hospice would be held whenever possible in the school holidays, so as not to conflict with traffic to local schools. Noah’s Ark hoped to negotiate for the use of extra parking space nearby at Barnet Rugby Club.

Support of the local community is critical to the success of Noah’s Ark and our work providing palliative care for children...

“Support of the local community is critical to the success of Noah’s Ark and our work providing palliative care for children, so we want to be a good community partner.

“We hope local people will get involved and use our new building, as well as the new environment centre, which is already proving so popular for school visits to the nature reserve.”

Mr Watkins said Noah’s Ark was well on the way to raising the £7.91 needed before construction could start.

“We know we have a challenging target to achieve by the end of the year, but Noah’s Ark started in the North London community, and we know that a children’s hospice is what our area needs.”

The exhibition of the revised plans was a big moment for Mary O’Toole, one of Noah’s Ark’s former social workers and a long-standing trustee.

“I was the one who helped inspire Noah’s Ark to choose the Byng Road site.  I read in the local paper that Barnet Council intended to dispose of the nature reserve and told the team that the site would meet all our needs for a hospice for children in need of palliative care.”