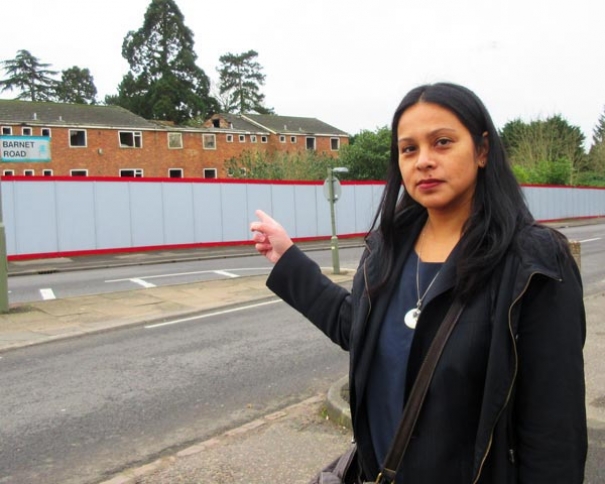 After failing three times to get the approval of the Chipping Barnet planning committee, Linden Homes’ application to construct 93 flats and 21 houses has now been referred to a meeting of Barnet Council’s area planning committee on 24 February.

In the first week since its launch, SODA’s Facebook page attracted 25 likes, and Serena Rushton, one of the campaign’s organisers, is confident support will grow once local residents realise the full impact of a development that they are convinced is far too dense for the site, and will lead to problems with parking and road safety.

If Linden Homes does obtain planning approval it will demolish the derelict and fire-ravaged former nurses’ homes that have disfigured the site for many years and replace them with 93 one-, two- and three-bedroom flats, and 21 three-, four- and five-bedroom houses. (24 units would be for affordable housing; 14 for affordable renting; and 10 for shared ownership).

The 3.9 acre Elmbank site extends south from its frontage on Barnet Road (A411) to just north of Barnet Hospital buildings in Wellhouse Lane, and backs on to houses in Elmbank Avenue and also to fields alongside the farm holding at Whalebones Park.

Mrs Rushton, who lives in Galley Lane, said local residents believed that not only was the density of the proposed new homes too high, but that the development would pose dangers for road safety on Barnet Road, and create considerable congestion.

...not only was the density of the proposed new homes too high, but that the development would pose dangers for road safety on Barnet Road,

Linden Homes had allocated only 155 parking space for the entire development: 129 parking spaces for a total of 93 flats and 21 houses, together with 26 unallocated spaces for visitors, and increase of 20 on the six originally proposed.

“We think this is nowhere near sufficient for car parking bearing in mind that many of the flats will have two or three bedrooms, and there are going to be three-, four- and five-bedroom houses.

“There is already huge pressure on off-street parking around the Arkley public house and also in the surrounding roads, because of the huge increase in the number of visitors to Barnet Hospital.

“Linden Homes have now offered to pay £10,000 towards the cost assessing and implementing a possible controlled parking zone in Barnet Road, and at the top of Galley Lane, but that would only lead to even more parking on nearby roads.”

The other issue of concern is that the single approach road to the site would be off Barnet Road, almost opposite the entrance to the Arkley’s car park.

“The junction with Elmbank Avenue and Barnet Road is already an accident black spot and to have another junction so close will pose an additional hazard.”

Mrs Rushton said the residents accepted that the derelict nurses’ homes and offices had turned the Elmbank site into a local eyesore, and there was a case for redeveloping the site, but there was not the space to fit in 114 homes.

“This can only be done by building blocks of flats, but until now flats haven’t been allowed in Arkley, and this development will set a precedent.”

In recommending approval for Linden Homes’ application, the area planning office says the development would have “an acceptable impact on the character and appearance of the site, street scene and locality” and would not have “an adverse impact on the amenities of neighbouring occupiers.”

Conditions for approval include a £15,000 contribution by Linden Homes for pedestrian crossing facilities in Barnet Road; £10,000 for a study for waiting restrictions in Barnet Road and Galley Lane; and £15,000 to produce a travel plan to reduce private car use.

More in this category: « MP steps up fight to save Whalebones Go ahead for 114 homes on Elmbank »