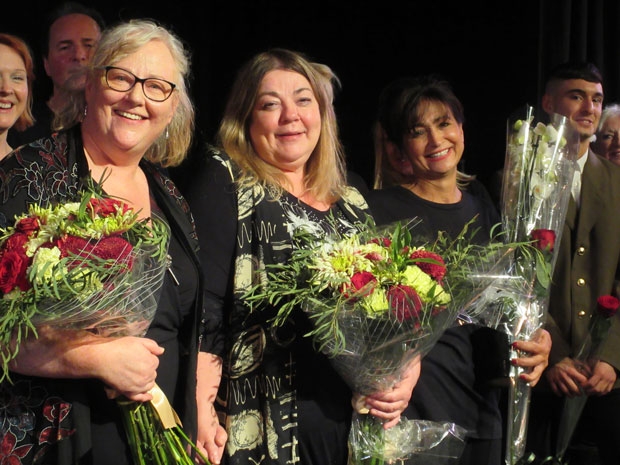 Their first production, Love and War – billed as an evening of “passion and laughter” ¬– ended with a pledge to carry on their efforts to encourage more locally-produced drama and theatre-making.

Cast member Claire Fisher – who presented Lally Tullett by Joyce Grenfell – spoke on behalf of the ensemble and described how weekly get-togethers, inspired by their interest and passion for drama, had spurred them on to stage their first performance.

She thanked the show’s director and producer, Siobhan Dunne, who had chosen for the cast a selection of extracts from well-known productions about love and war.

Ms Fisher praised another cast member Pina Griffin for all her inspiration and encouragement in establishing The Bull Players and thanked Susi Earnshaw, artistic director of the Bull Theatre, for all her support.

The Bull Players, whose ages range from 20s to 80s, meet every Wednesday to learn about drama, improvisation, script reading and theatre making

The Bull Players, whose ages range from 20s to 80s, meet every Wednesday to learn about drama, improvisation, script reading and theatre making.

When not attending their drama class, the cast members volunteer for a range of duties at the Bull, including serving as ushers and ice cream sellers.

Sequences in the show included Pina Griffin and Irving Wardle in The Seagull by Anton Chekov; June Warton as Mrs Pankhurst in Oh What a Lovely War by the Joan Littlewood Theatre Workshop; and Suzanne Hebrard and

Francesco Giacon in A Dolls House by Henrik Ibsen.

Proceeds from the production went towards meeting the cost of new seating and associated improvements to the auditorium and foyer.

More in this category: « Step back in time at Monken Hadley Son et Lumiere Petition to fight cuts to Barnet nursery schools »