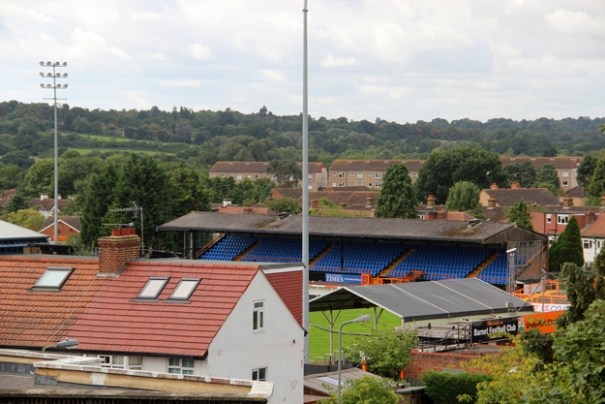 Over 400 comments have been registered with Barnet Council – and well over 70 per cent of them object to the development of a new six-form entry school by the Ark Academy network.

If planning approval was given, construction of what would be known as the Ark Pioneer Academy, could start in early 2017.

Robin Bishop, who leads the Society’s planning and environment team, says he hopes the planning committee will reflect the majority opinion among local organisations and residents that the proposed school is too large for the site.

“Perhaps as a result of our criticisms, the primary school intake has been reduced by 210 pupils, but that doesn’t go far enough and we consider the proposed scale of the development to accommodate a school for 1,680 pupils, together with 157 employees, is excessive.”

Mr Bishop says the Ark Academy application, which has over 100 accompanying documents, is one of the biggest – “and certainly most controversial” – in Chipping Barnet for years.

Here is the text of Mr Bishop’s letter to the area planning team:

We would welcome educational use of this site, particularly coupled with community access to the indoor and outdoor facilities of Ark Pioneer Academy (APA), but consider the proposed scale of development to be excessive.

It is the unfortunate consequence of focusing on one site and one sponsor instead of a unified planning strategy for the whole educational estate in this part of Chipping Barnet.

This could yet include maximising the value of existing assets such as Totteridge Academy, and a better distribution of educational resources from babies to adults, as well as their related vehicle access and parking.

The current proposal for 1,680 pupils and 157 employees – plus another 500 or so parents / carers, babies and toddlers delivering or collecting primary pupils – would exacerbate existing pressure on surrounding roads and pavements at the beginning and end of the school day.

This would get worse as planned housing developments are completed in the locality, and as traffic in the area as a whole increases in accordance with national growth (currently at least 3% per annum).

We are unconvinced by the mitigation measures proposed. The most critical of these would be the A1000 / Underhill junction, where the topographical problems of widening the road on this steep hillside would slow the exit from Underhill, especially towards Barnet town centre.

The controlled pedestrian crossings across Underhill and the A1000 would be inadequate for the pupil numbers (and behaviours), with consequent delays to vehicles and risks to safety.

The high levels of pollution hereabouts would   endanger the health of pupils and staff. The road and pavement alignment would also entail the loss of several mature trees at what is, in effect, the ‘gateway’ to Chipping Barnet.

We are also concerned about the capacity of the road between that junction and Mays Lane, given the need for residential parking and facilities for hail-and-ride buses.

Although the buses at the bottom of Barnet Hill serve a variety of destinations, there are no direct connections with the Mill Hill / Colindale sector, which could prove a popular home postcode and warrant a new service.

However, the section of Barnet Lane between Totteridge Academy and War Memorial is unsuitable for the passage of conventional buses on a regular public service, and substantial highway improvements would be required.

The building proposed is around 15% below the minimum area recommended by the Department for Education (DfE) in its Building Bulletins (BB) 98 & 99, which provided guidance to meet the increasing demands of 21st century education.

APA has been designed to the lower space standards of BB 103, which reduced floor areas to save building costs after the 2008 recession. Users’ education and well-being would suffer, and there would be pressure to enlarge APA as soon as funding allows.

The challenge of managing pupils would be compounded by shortage of outdoor recreation space. The total site is less than half the size recommended by BB 103, and the designated primary outdoor play area is some 30% less than the minimum recommended in BB 99 for a confined site.

Nursery children are even worse off: DfE & CABE guidance used to recommend at least 500m2 for 60 pupils; less than half that is shown.

Staggering breaks may relieve some of the pressure, but they would impact on teaching and learning in classes overlooking the play court. Since no primary ball court is provided, boisterous play would be especially disruptive (and potentially damaging).

This weakness is compounded by landscape design that lacks a clear rationale. On such a tight site play activities, equipment, surfacing and planting need careful planning, but the landscape proposals are sketchy and do not include essential play equipment.

The building design is based largely on DfE standard plans that work on more expansive sites with choice of access points but do not suit this very constrained site.

An unfortunate result is that the most prominent (north-east) corner of the building is dominated by the kitchen and plant area, whereas the main visitor entrance to the Academy is some 90m away - and barely visible - from the street.

The building appears to exceed the height of the former stadium. Its elevations are mundane, but at least most would be out of view from the street (though not from neighbouring houses).

We are concerned to see several internal teaching spaces and offices proposed. Though not a planning matter, they are further evidence that too much would be packed into the site.

We would welcome the proposed community access to outdoor and indoor PE, sport and fitness facilities, and would like this extended to APA’s drama, music and other specialist spaces.

However, insufficient information is provided about work to, and use of, the former cricket field and pavilion. A restored cricket ground would be a bonus, though not at the expense of other track and field sports. We note that the cricket pavilion is to be retained but not brought into use by the school.

This is a pity, and an undertaking to maintain or improve it should be required.

Insufficient priority is given to sustainable design or environmental education. The proposed target of BREEAM Very Good is unambitious. Greater commitment to these would have helped offset APA’s impact on the Green Belt.