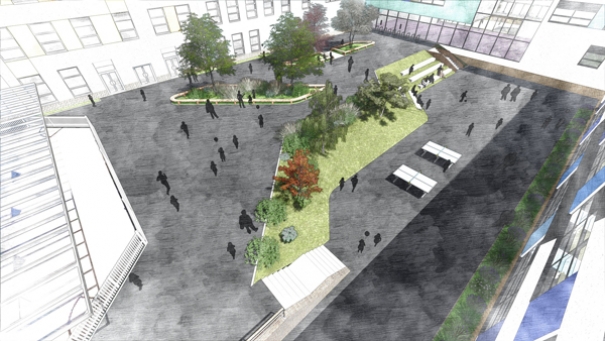 The internal courtyard of the proposed school
Barnet Council’s planning committee has voted unanimously to reject plans to build a massive all-through academy school on the site of Barnet Football Club’s former stadium at Underhill.

Hendon Town Hall was packed with over eighty local residents, community representatives and councillors to hear objectors put their case, led by Robin Bishop, chair of the Barnet Society’s planning and environment group, and Tim Leffman, a teacher and long-standing Underhill resident.

Local community groups and Underhill residents have been resolute for months in their opposition to the plan to use the vacant stadium as the site for the proposed Ark Pioneer Academy offering places for 1,680 pupils, from nursery age to sixth form.

All told there were nineteen objectors who had asked to speak at the committee hearing and they agreed that the case against the plan should be put jointly by Mr Bishop and Mr Leffman.
Council planning officers recommended approval of the scheme, but after a lengthy discussion and question and answer that lasted for an hour and half, the nine members of the committee were unanimous in their decision to refuse permission (25.1.2017).

In his presentation to the committee, Mr Bishop said the case for a school of this size being built at Underhill was fundamentally flawed: he argued that the Department for Education was anxious to recoup some of its huge investment in purchasing the former stadium; Barnet Council needed to hit its target for extra school places within the borough; and the Ark Academy group wished to increase the number of schools in its chain.

He criticised the design of the school. Because of “incredibly tight” restraints on costs and the size of the site, the whole scheme had been distorted and the architects had been forced to take “off-the-peg boxes” and squash them into too small an area.

The school buildings as proposed would be damaging for pupils’ education and health, and the shortage of outdoor space would not be good for their wellbeing, as it was less than half the minimum recommended by the government.

..didn’t even face out onto the beautiful Dollis Valley

Another ground for objection, said Mr Bishop, was that the school was to be built on a Green Belt site but “didn’t even face out onto the beautiful Dollis Valley”.

Green Belt development was only permitted under “very exceptional circumstances” and these had not been proved. There was capacity for expansion at existing local primary and secondary schools and he urged the committee to reject the plan for “an over-sized school with such deeply unexceptional design qualities”.

In his submission, Mr Leffman argued that the council’s case for building a school of that size at Underhill was flawed as regards demand for school places. Hundreds of pupils would be forced to negotiate multiple highway lanes to reach bus stops, the tube station and homes to the east of the A1000.

The consequent disruption to nearby roads would add considerable congestion and there would be a massive cost in enlarging the junction at Barnet Hill, Underhill and Fairfield Way.

After the hearing, Mr Bishop said their success owed much to the passion of Underhill residents and local school heads, and the backing of Underhill councillors. Among those who spoke against the plan from the floor was Councillor Caroline Stock.

Mr Bishop warned that there could be an appeal against the refusal to grant planning permission and it might succeed, but that could result in a backlash against those councillors and council officials who “seriously misjudged the strength of public and local councillor opposition”.

“It would be politically wiser for Ark, the Department for Education and Barnet Council to negotiate a scaled-down project. A sensible start would be to consult groups like the Barnet Society on alternative options, of which we know there are several.”