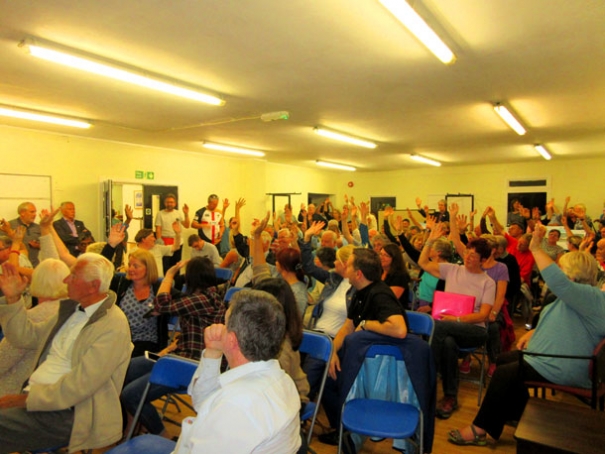 Unanimous show of hands residents decide Underhill is an inappropriate site for a school of 2,000 pupils
After facing a barrage of complaints and criticism over proposal to build a new school for almost 2,000 pupils on what was formerly the Barnet Football Club stadium, the Ark Academy network admitted its plans were “not yet a done deal”.

The application to construct, and finance, what will be known as the Ark Pioneer Academy is being made by the government’s Educational Funding Agency – not the Borough of Barnet – but Barnet Council will be deciding whether or not to give it planning permission.

Well over 100 local residents from roads around the former Underhill football stadium attended a meeting organised by the council’s three Underhill councillors, and it ended with a unanimous vote, on a show of hands, to reject the proposal on the grounds that it was not the appropriate place to build a school of that size.

But the Ark Schools’ head of projects, Jenny Duncan, assured the meeting (5.9.2016) that the views of local residents would be taken into account in the coming weeks as work continued on preparing the plans and measures to alleviate traffic congestion and parking.

Ark aims to submit the application before the end of the year, in the hope that construction work can start early in 2017, so that the first classrooms will be ready for use in September 2018, at the start of the new academic year.

Ms Duncan assured local residents they would have “every opportunity” to submit their views once the application had been submitted to Barnet Council.

“We are listening. We know there is scepticism about the proposed new school. This is not a done deal. We now have to deal with the planning process, and we recognise it will be up to the planning committee to make a decision.”

Councillor Paul Edwards, who chaired the meeting, called for a vote on whether Underhill was an appropriate site for such a massive new school – a plan which was criticised by everyone who spoke, for being a catastrophic mistake because the area could not cope with such a large influx of pupils and staff.

Local roads were already “a huge traffic bottleneck”, and there was an acute lack of parking due to the narrowness of local streets and cars left by commuters using High Barnet tube station.

Councillor Edwards thanked Ms Duncan for acknowledging that it was still an open question as to whether the proposed school would get planning approval.

He welcomed the unanimous show of hands against siting the new academy at the former football stadium.

...and the view of the meeting is that this is the wrong place because it will mean huge problems for local residents, exacerbate the lack of parking, and cause terrible congestion.

“The applicant isn’t the local council, but the government’s Educational Funding Agency, and the view of the meeting is that this is the wrong place because it will mean huge problems for local residents, exacerbate the lack of parking, and cause terrible congestion.”

He predicted that if Barnet gave approval, there would be so much pressure on parking around Underhill that the council would have no alternative but to introduce a controlled parking zone, as was about to happen in roads around Barnet Hospital.

Following earlier consultation, there have been some changes to Ark’s original plan for an all-through academy of 1,890 pupils, from primary to sixth form, offering entry each academic year to six forms each with 30 pupils.

Ark Pioneer will now have two primary forms of entry, instead of three, and the number of car parking spaces – to accommodate a staff of 150 – has been increased from 43 to 62.

Val White, Barnet Council’s programme director for education, told the meeting there had been a huge growth around Underhill and High Barnet in the number of children aged 3-4-5-6 who would need secondary school places.

This new all-through school, from primary to sixth form, would be funded entirely by central government and it was a recognition of the fact that Barnet would need an extra 20 classes by 2020 and an extra 30 by 2024. 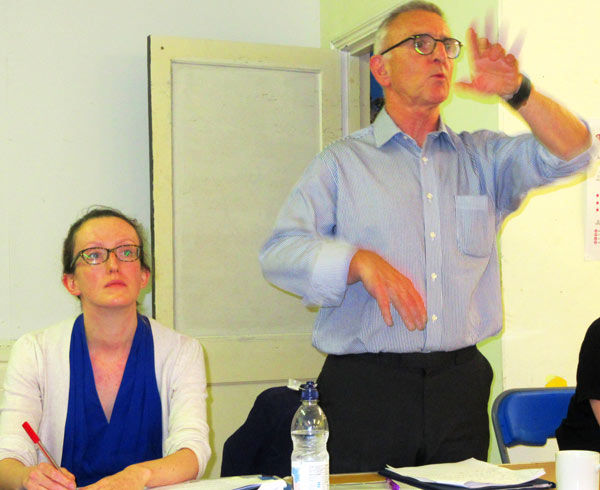 To cope with this, the borough needed the equivalent of an extra four secondary schools, a demand that would have to be met either by new schools or by expanding existing schools.

Most of the additional secondary places were needed in areas such as Colindale, Cricklewood and Brent Cross, but there had been expansion in the primary intake in the east of the borough and that would need secondary provision.

“It is difficult in London to find sites large enough for a secondary school and our need is to find secondary places for 3-5-year-old pupils.

We are now being offered a brand new school in the east of the borough.

When challenged as to whether the nearby Totteridge Academy was under-subscribed, one reason why local residents doubted the need for a new academy, Ms White said the borough’s responsibility was to ensure there were enough pupils to fill every secondary space.

“But we have to respect parental choice and if parents choose alternative schools, there might be empty places.”

In response to residents’ questions, Ben Gascoigne of Quatro, an agency handling the public consultation, said that after listening to residents’ concerns extensive plans had been made for community use of the school’s facilities, including its performance areas, activity studios, sports hall, multi-use sports area, and the playing fields to the south of the site which would be leased from Barnet Council and restored for use.

The new school will have buildings or two and three storeys, a height equivalent to the existing stadium.

More in this category: « Milly the cat puts road safety first Leading the way in housing for older women »