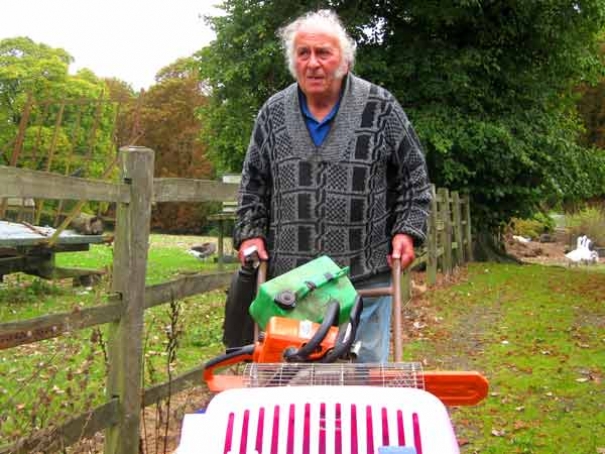 Peter Mason is 78 but has no intention of retiring from his farm in Wood Street
For the last 50 years Barnet children have needed to go no further than Wood Street to catch a glimpse of a scene that brings to life that much-loved nursery rhyme “Old MacDonald Had a Farm”.

Tucked away behind the tree-lined conservation area that lies between Barnet Hospital and the main road is the fourteen-acre agricultural holding of farmer Peter Mason, who at 78 says he still has no intention of retiring.

After he took on the farm tenancy in 1962, he reared cattle and horses for many years, but now concentrates on a vast flock of bantams, chicken, ducks and geese.
Children who take a peek through a gate opposite the Arkley public house can see what a farm really looks like: there is a duck pond, muck heap, tractor, chicken sheds and several barns full of equipment.

Strutting around the farm-yard as if they own the place are 200 bantams, 80 hens, 23 geese and 15 ducks that lay the free-range eggs that keep the farm in business.
Peter and his wife Jill live in the small cottage in the wood that borders Wellhouse Lane, just across the road from the entrance to the Barnet Hospital car park.

Before being enlarged their cottage was a pair of two-up and two-down cottages that date back to 1650 and were once the home of two well keepers. They supplied water for the horses of the carters and drovers who stopped off in Barnet when taking hay and forage into London or when leaving with loads of horse manure and ash.

Behind the Masons’ cottage is the original well, five-foot wide, brick-lined and very deep, but now safely covered over. “We did open it up once, in the drought of 1972, and the water is very good.”

Peter has been farming in and around Barnet all his life. As a boy he helped his father Robert Mason, a farm labourer, at milking time at what was once Homestead Farm in Galley Lane and is now a riding school.

His agricultural holding off Wood Street surrounds Whalebones, one of Barnet’s oldest residences, which was the home for many years of the late Miss Gwyn Cowing, whose family owned the Barnet Press.

“Miss Cowing was a lovely lady. She was anxious to preserve the park and farmland around Whalebones so that it remained a green space for Barnet. It is now a conservation area and all the trees are listed. When I secured the tenancy in 1962, she was determined to do all she could to help keep the farm going.”

To begin with Peter was into horse breeding, and then expanded into cattle but on reaching his seventies he found the animals too much trouble and for the last few years has limited himself to poultry.

At one time he had seven pure-bred Arabs (two stallions and five mares), four Shire horses (one stallion and three mares), and a herd of Dexter cattle.

“We kept the Shires until the late 1970s but then the Arabs went the same way when the bottom fell out of the horse trade. People just can’t afford to keep horses but

I am still tempted to have a couple on one of the meadows.

“It was the same with the cattle. We were fattening calves at Whalebones until five years ago but then the last of the cows had to go. I was about to be fined £2,000 if

I didn’t get her tested for tuberculosis and that was too much bother.”

Peter’s poultry flock keeps him busy. The geese lay from February through to June and he has customers from all around Barnet lining up for their eggs.

“We have got fifteen cockerels and luckily I have had no complaints from local residents about them crowing early in the morning. Poultry breeders up and down the country have lost court cases when people have complained about cockerels, so I’m keeping my fingers crossed.

“I do get a bit of trouble from the local foxes. They had one of the ducks the other day but all the birds seem happy enough and lots of local children like to come and feed them.”

Peter doesn’t sell poultry for the table.  “My flock are all egg layers. It’s too much trouble to do poultry for the Christmas trade. People want them oven- ready but I don’t have the time to pluck them and they’ve got to be properly hung.”

In the days when the farm had cattle and horses Peter was regularly seen driving his tractor round Barnet, delivering manure to householders and to the allotments in Byng Road and Bells Hill.

As he walks round his farm yard, feeding the poultry, Peter can’t stop telling stories about the days he had his Arabs, Shires and herd of Dexters.  Now he finds looking after the poultry a full-time job.

“I might be 78 but it keeps me going being here at the farm every day. Don’t worry, I am not going to give up, I shall be going out of here feet first.”

More in this category: « The busy bees of Barnet Dr Gear invested with the Order of the British Empire »