Barnet Market back at the bandstand 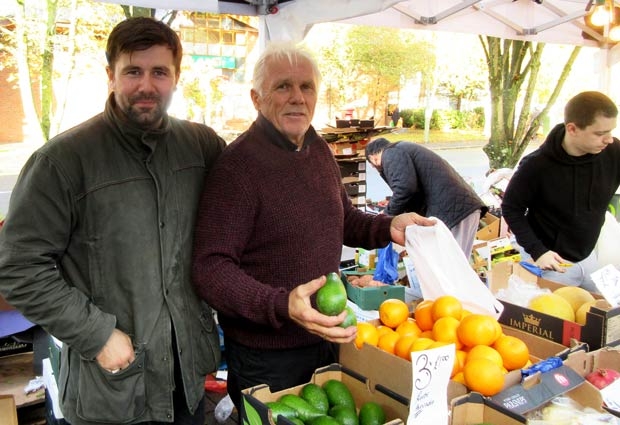 Tyler and David Bone run Barnet Market’s oldest fruit and vegetable stall
After having moved from site to site in recent years, Barnet Market has returned to the bandstand area beside Waitrose, at the rear of the Spires shopping centre, and traders hope that finally this will become their settled home.

Stallholders have been promised that adjoining land on the other side of the Spires’ service road – including space around the mound – will be re-landscaped to provide paved areas with room for coffee and refreshment stalls, as well as new seating.

“We have been assured the lay-out for the market around the bandstand will be improved, and that there will be proper facilities such as electricity connections,” said Tyler Bone, a third-generation fruit and vegetable stallholder.

“If we get what’s been promised, and the market becomes really welcoming, we could do really well again.”

Chris Nightingale, organiser of Friends of Barnet Market, said the success of the move from St Albans Road to the rear of the Spires was “crucial” to the market’s long-term future.

“After what have been difficult years for the market, there is hope now that the market is beginning a new chapter in its long history,” says Andy Gardiner, of the Barnet Market Traders Association.

He issued this appeal to High Barnet residents:
“Don’t just be a friend of the market, become a valued customer. This is your community market that you fought so hard to keep. Continued support will help the market flourish.”

The move back to the bandstand area follows the decision by Barnet Council to grant planning approval for a Premier Inn on what was originally was the site of former Barnet cattle market, and later became a market for fruit and vegetables as well as household hoods.

When the cattle market was demolished, and the future development of the site was in dispute, the market moved temporarily to the Stapylton Road car park, and later to the bandstand area when the original site was acquired and re-surfaced by the Spires’s owners.

If we get what’s been promised, and the market becomes really welcoming, we could do really well again.

Regular traders said they were keeping their fingers crossed that at last the market might regain lost trade.

Lenny Harvey from Cheshunt, who runs Lenny’s meat stall with his wife Lynn, said that the first day back at the bandstand (10.11.2018) had seen new customers come along.

Adrian Wright, a Lowestoft fishmonger, who drives his van to Barnet every Saturday, was equally optimistic about attracting new custom.

Next year will be the market’s 60th year of trading as a general market – and will also be the 60th anniversary of the Bone’s fruit and vegetable stall.

Tyler Bone runs the stall with his father David, and it was David’s parents Albert and Joan who started the first pitch selling fruit and vegetables in 1959.