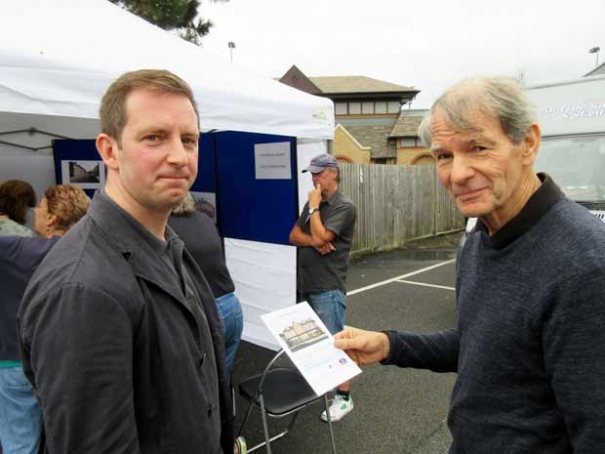 Chris Nightingale, of Friends of Barnet Market (right) told development director Simon Shaw he supported plans for the Premier Inn hotel on condition there was a guaranteed new site for Barnet market
Residents of Chipping Close were out in force to express their continuing opposition to the construction of a 100-bed Premier Inn opposite their homes on the site of Barnet Market.

After Barnet Council’s planning committee voted in July to reject the plan, Locate Developments have revised their proposals, and at the first of two open consultations, heard the views of those living nearby and in the rest of High Barnet.

Simon Shaw, development director, said the company hoped the changes would reassure residents in the surrounding area that they were doing all they could to meet local concerns.

The consultation at the market place car park – to be repeated with another drop-in on Monday 3 September between 6pm and 8pm – was also an opportunity for Locate to promote the possible benefits to High Barnet of a town centre Premier Inn.

Although the Chipping Close community remained resolute in their opposition to a three to four storey hotel overlooking their homes, some residents from nearby roads joined other shoppers and passers-by in welcoming the prospect of a new hotel next to the Spires shopping centre and close to the High Street.

“I’m in favour of the hotel,” said Wilf Nicholls of Salisbury Road. “Our house is just behind the Spires, so we are very close, and I think the changes in the plan will make a big difference for the residents.”

But Richard Gardham of Chipping Close said a 100-bed hotel was far too big for such a small site. The increase in traffic in their road would be horrendous.

The developers are just trying to soft-soap everyone into thinking a hotel will benefit Barnet, but there is no evidence it will bring business to the town or attract new retailers to the Spires

“The developers are just trying to soft-soap everyone into thinking a hotel will benefit Barnet, but there is no evidence it will bring business to the town or attract new retailers to the Spires.”

But Mr Shaw insisted Locate had taken on board earlier criticisms expressed by residents and changes recommended by Barnet’s planning committee:

Mr Shaw said Locate aimed to resubmit its planning application by the end of September and if approval was obtained, work would start early in 2019 and the hotel would be for business by early 2020. 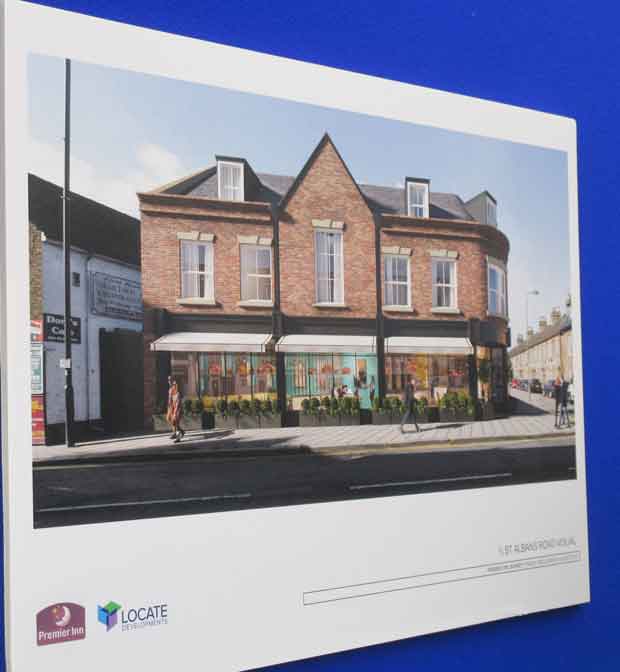 “Our plan is for a town centre hotel, that fits in with the character of High Barnet. It is not going to be the kind of Premier Inn situated alongside motorways.

“The guests we would expect to attract are people doing business in the locality or those visiting families and friends.

“Other possible sites have been mentioned, such as the former High Barnet police station, the former Brake Shear house workshops, or the former Barnet College building at the junction of the High Street and Fitzjohn Avenue, but they are not available, nor do they have secure car parking space nearby.”

Among those supporting Mr Shaw’s argument that High Barnet would gain from a Premier Inn was Ave Vinick of Sebright Road. “A new hotel is just what High Barnet needs. Our High Street shops are teetering on the edge and this would be a big boost.

A new hotel is just what High Barnet needs. Our High Street shops are teetering on the edge and this would be a big boost.

“I think we all understand the concern of the Chipping Close residents, but the alternative to a sympathetically-designed Premier Inn is probably going to be a block of flats and that will be far less appealing.”

The hotel would be three storeys high facing Chipping Close and this is still far too high in the view of Alan Howard who has lived in the Close since he was a child.

“The hotel is going to be four storeys high facing the Spires and it will block out the sun in our garden.”

His wife Mary Howard also remained unconvinced. She doubted whether hotel guests would spend money in nearby shops and restaurants.

Steven Struthers, another Chipping Close resident, argued that the changes didn’t address their concerns. “We will still get loads of cars doing U-turns in Chipping Close.

We just don’t like the scale and proximity of the new hotel – it might have been different with a development that was more respectful to the neighbourhood.”

Anthony Collett, another critic of the plan, said a new hotel on the market place would clog up the area. “If you want to build a new hotel there is plenty of space around Borehamwood.”

If you want to build a new hotel there is plenty of space around Borehamwood.

Chris Nightingale of Friends of Barnet Market expressed support for the hotel but that was on condition there was evidence of real guarantees that a secure new site would be found for the market.

Robin Bishop, chair of the Barnet Society, said he was concerned about the likely traffic snarl-up around the St Albans Road and High Street junction if Bruce Road was used as the entrance and the proposed design of the entrance itself.

Once we have looked at these proposals and consulted widely, the society will respond to any fresh planning application made by Locate

The revised plans will now be considered by the society’s committee and planning advisers and every effort would be made to consult the society’s membership, and especially those living in nearby roads.

“Once we have looked at these proposals and consulted widely, the society will respond to any fresh planning application made by Locate,” said Mr Bishop.

More in this category: « Premier Inn - What next? New plans for Brake Shear House »