Barnet Band celebrates its transformation from brass to wind 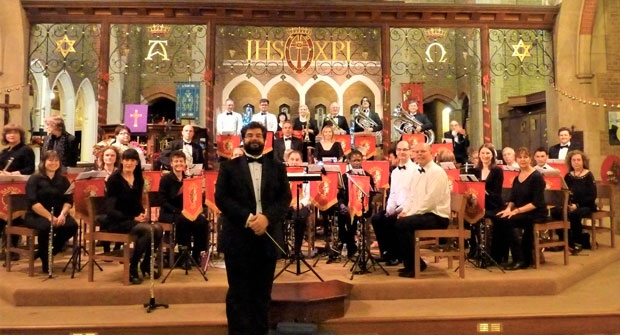 Barnet Band, with conductor Ian Brookman, is holding an anniversary concert featuring music from the last 13 decades
Barnet Band, originally the High Barnet Foresters’ Brass Band, which started performing in 1889 – with just 15 instruments that had cost £42 – is about to reach its 130th anniversary.

A special concert is to be held on Saturday 2 February at St James Church, New Barnet, to mark the occasion.

A repertoire of music will celebrate the rejuvenation of one of Barnet’s oldest musical groups – a transformation that began in the 1980s when because of a declining number of brass band players, the decision was taken to welcome wind players.

Barnet Band, now a community-based wind band (www.barnetband.org), has a playing strength of 30 to 40 musicians and gives regular concerts around Barnet and supports local charities.

The 130th anniversary concert, in aid of Cherry Lodge Cancer Care of Barnet, will feature a selection of music from the past 13 decades of the band’s repertoire and will include marches, music from shows and films, wind band classics, the premiere of a piece especially commissioned for the concert, and a performance by Cherry Lodge Singers.

Sue Dunn, Barnet Band secretary, said their reinvention in the 1980s as a wind band, welcoming clarinet, flute, saxophone and bassoon players, had given the group a new lease of life. 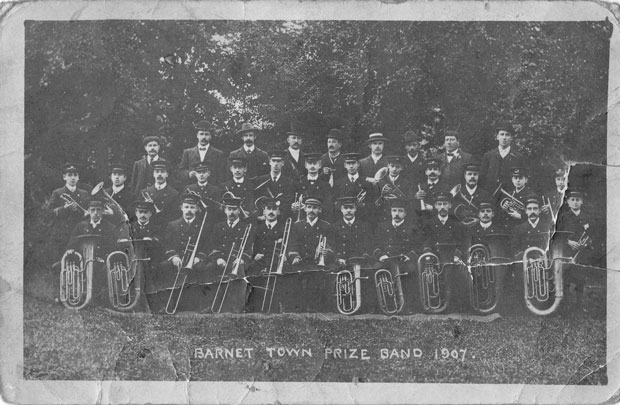 “During the summer, we play at fetes, community events, and bandstands, while Christmas sees us participating in Barnet’s Christmas Fair.

We also give concerts for local charities and over the years have been privileged to help many worthy causes.

“The band is a not-for-profit organisation run by its members, and as a community wind band, we accept new members without audition, and we don’t ask for grades.

“We are currently seeking clarinets and brass players. So, if you play a clarinet, tuba, trombone, French horn, euphonium or trumpet and fancy playing in a friendly community band, give us a try. We aim for our rehearsals – on Wednesday evenings – to be fun.”

The band was established by the Court Pride of Barnet Foresters on 31 January 1889 and its history provides a fascinating insight into the growth and excellence of brass bands.

Its first musical director was Corporal Yeomans and the 7th Kings Royal Rifle Corps and the first engagement for the High Barnet Foresters’ Brass Band was at the Green Man in March 1889.

George Byford succeeded Corporal Yeomans in 1895 and continued as conductor – at a salary of three shillings a week – until 1907, winning numerous prizes in band competitions.

In 1898 Dr Osborne Boyes presented a new set of brass instruments at a dinner held at the Star public house, replacing the original 15 instruments that had been purchased new at a cost of £42.

Later that year the band won first prize in the Fulham Brass Band contest – the first of over 150 prizes won over the years.

After becoming a founder member of the London and Home Counties Amateur Band Association – under the new name Barnet Town Band – the band won first prize at the association’s annual contest at Crystal Palace in 1908.

The band played at the opening of the war memorial at Barnet parish church; welcomed its first female member in the 1940s; and celebrated its diamond jubilee with a concert at the Old Court House recreation ground in Wood Street, Barnet in August 1949.

The transformation to a wind band followed several difficult years in the 1980s when it had not been possible to stage viable performances.  Under its director Denis Collings, the band welcomed wind players and changed from being a competition brass band to a community wind band.

Sue Dunn said the band’s archivist – who cares for a collection of photographs of the band over the years – is always keen to hear memories and stories about the band’s past performances and history.

Barnet Band’s 130th anniversary concert at St James Church, New Barnet, 7.30pm Saturday 2 February. Tickets available – £10 and concessions £7 – on the door or in advance from This email address is being protected from spambots. You need JavaScript enabled to view it.  or 020 8441 7000

More in this category: « Barnet Councillors’ pledge to tackle rough sleepers and street drinkers Campaigning to save traditional public houses »