Another round for Battle of Barnet funding 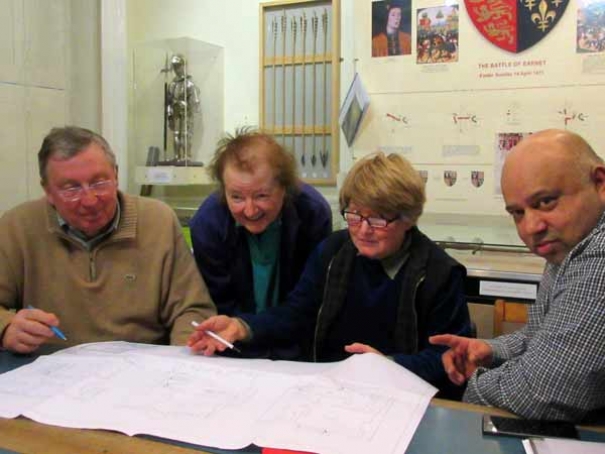 Trustees from left to right: Dennis Bird, Carla Herrman, archivist Dr Gillian Gear, co-curator, Mike Noronha
Barnet Museum is to take the lead in a fresh application to the Heritage Lottery Fund for a grant towards the cost of an archaeological dig to determine the site of the Battle of Barnet of 1471.

Dr Glenn Foard, Huddersfield University’s celebrated military archaeologist,   would supervise the excavation, and a Battle of Barnet heritage trail, starting at Hadley Highstone, would be one of the lasting legacies of the project.

The Barnet Society and the Battlefields Trust are supporting the application, and together with the museum and the university, they say they now have far greater confidence than before that funding can be obtained after the delays and setbacks and of recent years.

In his preparations for the project, Dr Foard has already offered two fascinating insights into the likely significance of a thorough excavation: he thinks the boundaries of the battlefield site are to the north of those indicated by English Heritage, and that the historical importance of the Battle of Barnet is that it might be the first European battlefield where hand guns were used.

Any archaeological or military objects found during the excavation of what was considered one of the grisliest battles of the Wars of the Roses would be cleaned and exhibited at the museum.

An application has now been submitted to Barnet Council for planning permission for a two-storey extension at the rear of the museum to provide extra space to accommodate work on the Battle of Barnet project.

Dr Gillian Gear, the museum’s archivist, says the revised funding application to the Heritage Lottery Fund is the culmination of months of work behind the scenes, and she is sure there is a real chance of a breakthrough for both an archaeological dig and a step-change in the scope of the museum.

“The two projects really do go together and are so important towards securing the long-term future of Barnet Museum.

A go-ahead for the archaeological dig would give a real impetus to our plans to expand the museum, widen the scope of our work and enhance its status.”

The revised funding bid is for £100,000 and would finance the archaeological excavation and follow-up work at the museum, and help pay for a heritage trail, information boards and other associated projects.

“Dr Foard and his team at Huddersfield will do the preparatory work and prepare the technicalities of the bid.

After taking the advice of the Heritage Lottery Fund and securing significant promises of local support, we think we are closer than ever to getting the go-ahead.

“We have a real chance now of locating the precise site of the battle and of getting Barnet the recognition it deserves for its role in the Wars of the Roses, an achievement that has thwarted local historians for so many years.”

Plans for a rear extension to Barnet Museum have been prepared by the Barnet Society and are the work of two local architects, Markus Geiger and Judith Clouston.

The extension could cost around £300,000 and would compromise a new basement housing extra storage space and a workshop; a ground floor area for cleaning and exhibiting finds; and a first-floor educational area.

More in this category: « Plans for a heritage trail for the Battle of Barnet Plans for Barnet golf course »