A new nature reserve for Barnet? 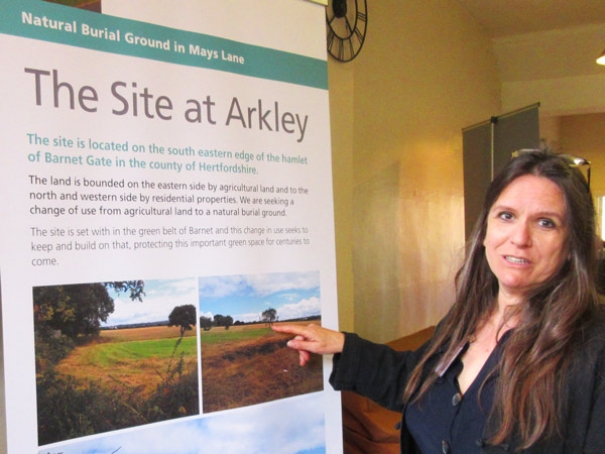 Rosie Inman-Cook, manager of the Natural Death Centre, points to where the first burials would take place
A 50-acre green space, open to the public from dawn to dusk, would be one of the suggested benefits of the proposal to establish a natural burial ground on farmland behind Barnet Road and Barnet Gate Lane, Arkley.

The Natural Death Centre says the site would be left to grass, with new trees and shrubs; become a haven for wildlife; and provide permanent protection for a significant stretch of Barnet’s Green Belt.

Each burial plot would remain unmarked except for a small tree or shrub, and the only development on the site would be “a small gathering room” for mourners, an office and reception area, toilets and associated car parking.

Local householders, especially those living in Barnet Road and Barnet Gate Lane, have been asked to respond to a questionnaire, and an exhibition was held at St Peter’s Church, Arkley, (21.5.2016) where representatives of the landowners and the Natural Death Centre answered questions.

Initial consultations have already been held with Barnet Council, and the developers now plan to consider local feedback and address outstanding questions, such as agreement on an approved entrance to the site.

If planning permission could be obtained – and a previous application to establish a Jewish cemetery on the site was refused – then the burial ground might be established late next year or early 2018.

Rosie Inman-Cook, manager of the Natural Death Centre, told the Barnet Society that initially there might be only one burial a week. The average at other natural burial grounds was perhaps one a day.

This is such a large site, there is enough burial space to last until the end of the century, and we would be providing an amenity for local people, as well as a natural burial ground.

“This stretch of farmland has effectively been ploughed out over the years. Currently it is planted with oil seed rape, but we would let it become a hay meadow, hoping that natural grass seeds would regenerate, and we might also introduce yellow rattle, which bees love.

“In effect it would become a nature reserve, and although it would be gated, it would be open to the public from dawn to dusk.

“We would plant a ten-metre wide copse around the perimeter of the site, and there would be no visual clue that it was a cemetery.

“Once the area is laid out with paths, I am sure it will become very popular with dog walkers, but they will have to keep their animals on the lead.”

Reilly Holdings, which owns the site, would make the planning application, and if approved lease the land to the Natural Death Centre. Nell Dixon, surveyor for the landowners, said a natural burial ground would be quite different to the earlier proposal for a Jewish cemetery as there would be no headstones, just trees and shrubs, and the site would have public access.

“Our initial ornithological survey of the site did not throw up the existence of any protected species, but we have now heard from residents that skylarks and nightingales have been heard in the vicinity.

“That kind of feedback is important, and we will be carrying out further surveys in conjunction with the planning authority.”

One potential stumbling block is the difficulty of providing access. An entrance to the site off Mays Lane, next to the Old Elizabethans’ playing field, is considered too dangerous, because of a bend in the road, and Reilly Holdings intend to work with Barnet Council on a traffic plan that might include a realignment of the road.

Ms Inman-Cook said that initially burials might start at the Glebe Lane end of the site. “We know there are lots of issues to sort out, such as access, but this would preserve this land as a green space for the rest of the century, and it will be a tremendous asset for local people.

“The UK leads the world in natural burials and we would aim to operate an exemplary facility for families in the area.”

The Natural Death Centre (www.naturaldeath.org.uk) describes itself as “social-entrepreneurial, educational charity” that provides free, impartial advice on all aspects of dying, bereavement and consumer rights. It was established in 1991,

There are around 300 natural burial grounds in the UK, of which 68 are members of the Association of Natural Grounds.

Comments on the plan can be registered at This email address is being protected from spambots. You need JavaScript enabled to view it.