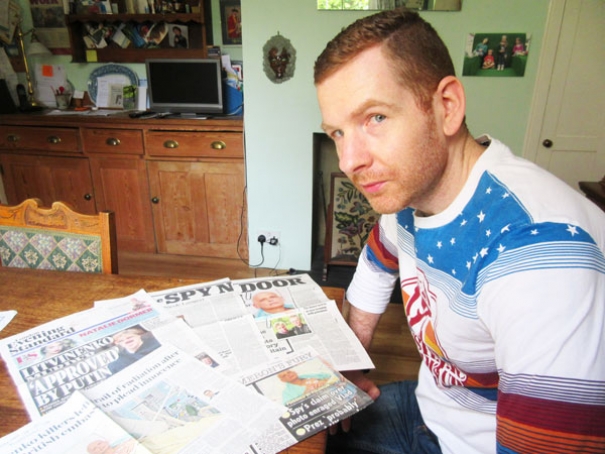 Peter Stebbings with newspaper cuttings of the death of Alexander Litvinenko’s after radioactive poisoning.
The tenth anniversary of the poisoning with radioactive polonium of the former Russian spy Alexander Litvinenko brings back memories for an ex-Barnet journalist who reported on the role of Barnet Hospital in the story surrounding one of London’s most alarming assassinations.

Litvinenko lived with his family in Muswell Hill, and in November 2006, after being taken ill, he spent thirteen days in Barnet Hospital, under an assumed name, before being transferred to University College Hospital where he was placed under armed guard.

As news of the poisoning emerged – and chemical experts began finding traces of radiation across London – the Barnet Times’ chief reporter Peter Stebbings was assigned to the story full time.

“It was sensational: an ex-KGB spy getting poisoned at a London hotel with tea that had been laced with polonium-210, and then him ending up in hospital in Barnet.

“As we had all been standing outside his house for such a long time, hoping to speak to someone, we did begin to wonder whether we should get checked out for radiation as well,” said Mr Stebbings (38), now sports editor for the Agence France-Presse in Paris.

It was a fascinating tale, especially once we found out that Litvinenko spent 13 days at Barnet General under an assumed name

On November 1 2016, Litvinenko’s pot of green tea at the Millennium Hotel was sprayed with polonium, and later that day he fell violently ill.

A haunting photograph of Litvinenko in hospital, three days before he died, became an iconic deathbed image, and is widely reproduced whenever the story resurfaces in the news media.

Mr Stebbings said he and the other journalists had great difficulty obtaining reliable information as to what had happened, especially about the time he spent being treated at Barnet Hospital, but he did discover that another critic of President Putin also had a house in Osier Crescent.

“One day I spotted a black Mercedes 4X4 with blacked out windows pull into the crescent. I followed where it went and saw that the driver lived nearby. He was also a Russian, and said he was a friend of the Litvinenko family. He gave me his mobile phone, but although I rang it at least 50 times, he never answered.

“All the neighbours said that Mr Litvinenko, his wife Marina and their son Anatoly, were very nice.

“They saw him playing outside with Anatoly, and the locals all said they had no idea that they had a former KGB agent living in the crescent or that he’d subsequently fallen out with President Putin and his life was in danger.” 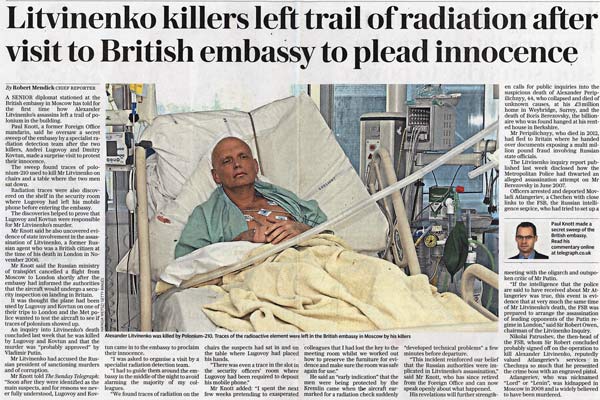 In January this year, after a public inquiry, Sir Robert Owen concluded that President Putin had “probably approved” Litvinenko’s murder, and it had been carried out by two Russian killers, Dmitry Kovtun and Andre Lugovoi, “under the direction” of Russia FSB spy agency.

After the publication of Sir Robert’s report, Litvinenko’s former next door neighbour in Osier Crescent, Nicole Lampert, described what happened in the Daily Mail (3.2.2016)

She said the ex-spy and also a former Chechen leader, Akhmed Zakayev, had both been provided with houses in Osier Crescent by the Russian oligarch Boris Berezovsky, who died in mysterious circumstances at his Berkshire mansion in 2013.

Ms Lampert, who moved away from Osier Crescent some years ago, said that she was feeding her new born baby when an ambulance pulled up outside the Litvinenko’s house on November 4. He was led out by two paramedics, leaning against them, struggling to walk.

“I rushed out of the house to see what was wrong and Alexander’s tearful wife Marina told me she thought he had food poisoning, but it had lasted a couple of days and she was worried about him.”

Two days later Marina told her that she thought that maybe someone had tried to poison her husband.

“Alexander passed away late on the night of November 23. We had been watching the news avidly and knew he was failing, but only realised for certain he had gone when, around midnight, we saw a fleet of cars – one clearly containing the silhouette of Berezovsky – pulled up in front of the house to help Marina move out.”

Ms Lampert said that Marina never moved back to Osier Crescent. “The house, teeming with traces of polonium, was deemed too dangerous. Berezovsky found her a new home in West London, while our house and theirs was put behind a police barrier.

“We were left to do our own research into the dangers of polonium, which we thankfully discovered could not seep into our house. In the end it was decided to leave the material to decay of its own accord, and the house stood empty for four years before being declared clean.

“I know we will never forget the spy who lived next door and extraordinary events that unfolded in what had at first seemed the most ordinary of suburban streets.”

Shortly after Litvinenko’s death, Mr Stebbings, formerly of Granville Road, Barnet, left the Barnet Times to become a reporter at the Daily Mail, before joining Agence France-Presse nine years ago.

He hast recently started a new posting as sports editor at the Paris office, after previously working in Washington.

More in this category: « A new nature reserve for Barnet? A misty Easter Sunday morning, just north of Barnet »