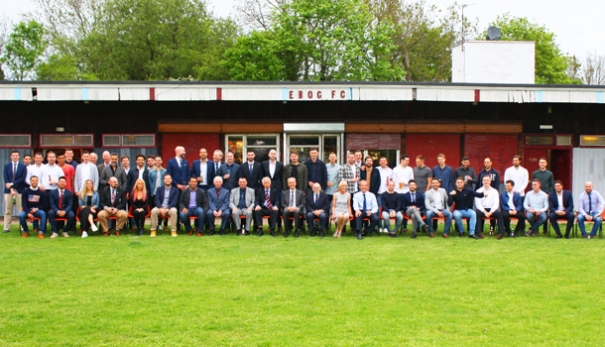 East Barnet Old Grammarians
A football team for former East Barnet grammar school boys that has expanded over the last sixty years to become a community-based amateur football club, has been celebrating the performance of its top players.

The club was founded in 1948 for the alumni of East Barnet School, but changed its rules in the early 1980s to open up its membership and currently fields six 11-a-side teams on Saturdays with matches for its veteran, youth and ladies’ sections on Sundays.

Over 70 players and supporters attended the annual awards night to celebrate the end of the club’s 68th season.

Terry Boyce, chairman and a past student at East Barnet School, says it has been a difficult year for the club, but everyone pulled together and the Old Grammarians’ two highest teams had been battling for promotion instead of the relegation fights of previous years.

“Like many other 11-a-side amateur football clubs, we have been affected by a shortage of available players, and we are keen to welcome new players of all ages (16 plus) and abilities, especially goalkeepers.”

Mr Boyce said a special mention had to go to the clubman of the year, Sid Draper, who had sometimes made over a hundred calls a week to ensure they had enough players for a full set of teams.

“With lots of our younger members keen to volunteer their time, I am looking forward to next season in September.”

EBOG FC is a member of the Southern Amateur League and affiliated to the Amateur Football Alliance.

Its three pitches and clubhouse and bar, built in 1962, are in Alan Drive, off Mays Lane.  The club has over 200 members; is run entirely by volunteers; has charitable status; and is self-funding.

In 2007 it received a one-off grant from the Football Foundation to improve the drainage of its ground which had proved invaluable during recent wet winters.

Top trophies and prizes included the award for newcomer of the year, which went to 18-year-old Harry Gallagher, who had impressed by playing a high level for age, and to the top goal scorer Anthony Bates, with a record of 29 goals.

Club awards were presented to:

More in this category: « Arkley farmland - a site for natural burials? A new nature reserve for Barnet? »