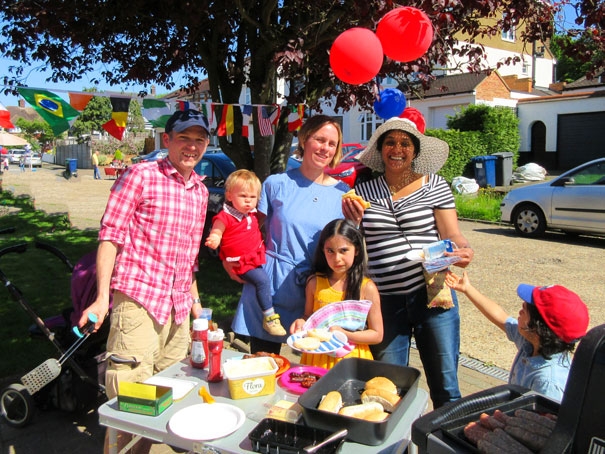 Enjoying the barbecue at the Old Fold View royal wedding street party were, (from left to right), cook Matt Fellows, one of the organisers, Angela Spatz with baby Grace, and neighbour Anushka Pisano
Old Fold View was one of several roads in and around High Barnet that was closed off to traffic so that residents could hold a street party to celebrate the Windsor wedding of Prince Harry and Meghan Markle.

A crowd of well over a hundred enjoyed a barbecue, street food and an afternoon of games for the children.

Angela Spatz, one of the organisers, said the Royal wedding provided a wonderful opportunity for locals to get together.

Seventy per cent of the Old Fold View households gave their support to a party raising funds for the construction nearby of the Noah’s Ark Children’s Hospice.

“We brought the street together for carol singing at Christmas and everyone said we should hold another event, so Harry and Meghan’s wedding was just the excuse we needed.” 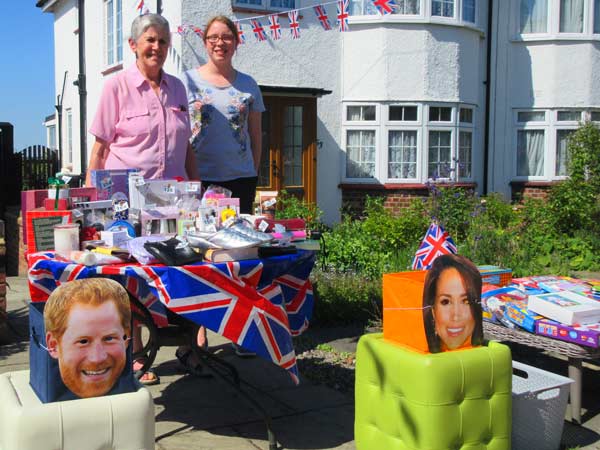 Ms Spatz said the wedding itself was an amazing spectacle; Meghan’s dress was so beautiful.

“The wedding day has been so brilliant, and the street party has given us all another chance to raise money for the new children’s hospice.”

Caroline Klage, another Old Fold View resident, said the road contained a very energetic group of people who were community-minded neighbours, anxious to bring everyone together.

“Whether you or aren’t a fan of the royal family, we all recognise the need to celebrate something positive and bringing people together for a street party is just what we need given all the divisions of the last few years.”

Other High Barnet area parties were held in Garthland Drive and Wyburn Avenue.

More in this category: « “What’s a selfie?” – asked Fred, 94, next birthday Wars of the Roses banners transform Barnet High Street »