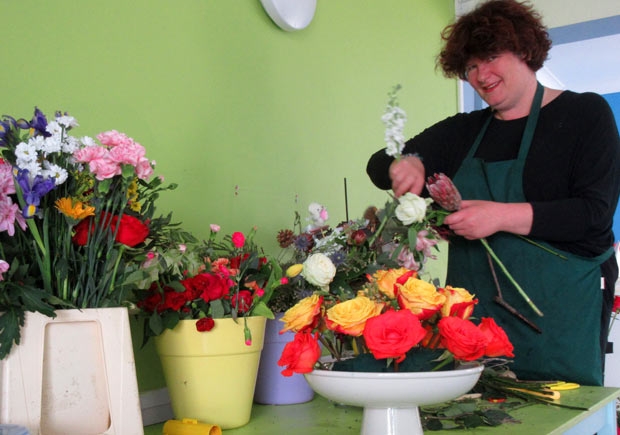 Ursula Stone is hoping to expand Flower Bank, a pioneering New Barnet project for making use of unwanted supermarket flowers
A pioneering New Barnet project for re-using supermarket flowers that have passed their sell-by dates is hoping to secure Lottery funding to expand its work teaching flower arranging to young offenders and residents at care homes.

Flower Bank, based in premises in Leicester Road shopping parade, was set up three years ago by Ursula Stone, a former mature student at Capel Manor College, Enfield.

She collects unwanted flowers, that would otherwise go to waste, from supermarkets and commercial flower arrangers and re-uses them in flower arranging classes at care homes, dementia units and community centres.

Finished flower arrangements are given free of charge to residential homes; bouquets and flowers are offered to hard-up young couples about to get married; and flowers are available for family members struggling to pay funeral costs.

Ms Stone got the idea when doing her floristry work experience at Capel Manor and saw the “appalling” waste of flowers at commercial arrangers who have no option but to throw away flower arrangements often after only a day.

“With help from another volunteer I now collect surplus flowers from eight local supermarkets, either late at night or first thing in the morning, and we are also offered surplus flowers by a commercial arranger supplying displays to offices in Canary Wharf.”

“Working with residents with dementia is so rewarding. Just the act of touching or stroking a flower seems to re-awake memories and before you know it there is an amazing response even those from who have little communication or mobility.”

Since she started doing flower arranging with young offenders, she has worked with a total of 35 youngsters (aged from 12 to 18) in Haringey and is expanding into Barnet and is now working with youngsters at the Baca cultural and community centre in West Hendon.

“Working with flowers has such a calming effect especially on young boys who might be excluded from school.

“Often, they have a far better grasp than many of the girls when it comes to thinking about a flower arrangement or display and great imagination in choosing the best colours. I tell them that the top florists in the country are men, and that impresses them.”

Ms Stone’s next objective is to develop flower arranging and floristry at her Flower Bank pop-up shop in New Barnet which is about to be refurbished ready for opening in July.

The lease of the premises was acquired after she raised a total of £72,000 through a crowd-funding appeal that included £30,000 in match funding from the Mayor of London’s appeal.

She is now in the process of applying for three-year funding from the Lottery which would help pay a salary for herself and two part-time florists who could help with the flower arranging sessions.

“So far, I have funded Flower Bank myself, but I am a single mother with a ten-year-old and 16-year-old, and Lottery funding would help secure the future of Flower Bank and mean we could expand and re-purpose many more surplus flowers and pot plants and perhaps even offer a basic qualification in floristry.

“Initially I got a start-up grant from Barnet Council and that helped me get going, but I hope the Lottery will now agree that we tick so many boxes.

We are using unwanted and wasted flowers; we are working with the elderly and troubled youngsters; and we could do so much more.

“We are using unwanted and wasted flowers; we are working with the elderly and troubled youngsters; and we could do so much more.”

Other initiatives include a project to dry rose petals in a dehumidifier to provide environmentally friendly confetti. Haringey registry office, which bans paper confetti, has already signed up.

The long-term aim at the Flower Bank shop is to use the rear garden to work on pot plants.

At this year’s Chelsea Flower Show, Ms Stone arranged one of the events on the Chelsea Fringe. Volunteers from across Barnet decorated litter bins with unwanted flowers.

All donations for flower arrangements, displays, bouquets and confetti from Flower Bank help to defray running costs and Ms Stone is appealing for volunteers who might assist with the collection of flowers from supermarkets.