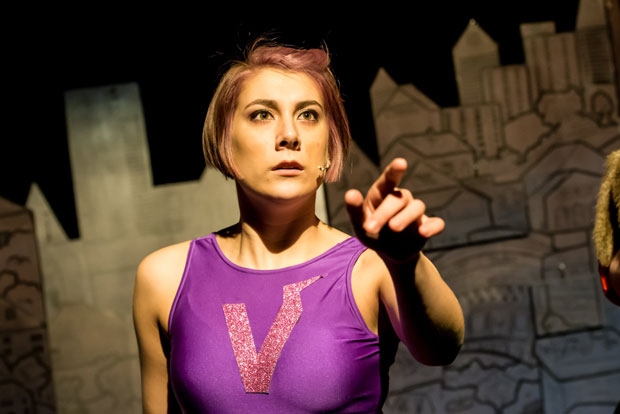 Allie Munro stars as a feminist super hero in Vulvarine, the fifth production of the Fat Rascal theatre company
After-school drama classes at the Bull Theatre provided an all-important source of inspiration for a Barnet schoolgirl who is now starring in musical comedy productions that have regularly sold out at the annual Edinburgh Festival.

Allie Munro (24) is currently touring the country with Vulvarine, the latest show by the Fat Rascal theatre company, which includes a London run starting in mid-June.

Vulvarine, which has a comic cartoon-like story line, is the fifth creation of Fat Rascal’s artistic director Robyn Grant, who is busy writing their sixth show, which is a musical parody of a Disney fairy tale, ready for this year’s Edinburgh Festival.

Allie and Robyn studied together at the University of Essex’s East 15 acting school at Loughton.

At the end of their acting and contemporary drama course, they staged their first joint show Buzz, a musical comedy, which was written and directed by Robyn, and in which Allie took the lead.

Then, they took Buzz to the 2016 Edinburgh Festival and sold out their month’s run.

Feisty women are a running theme in our productions, not just girl friendly, but leading the story line

“Robyn is such a fantastic writer and lyricist, and she so values the input of the rest of the company, that we work really well together as a team.

“Her scripts are very risqué and empowering; very current too with lots of pop culture references and digs at the political themes of today.

“We were over the moon when one reviewer suggested Robyn’s imagination and writing was as inspiring as that of the Fleabag creator, Phoebe Waller-Bridge.”

The success of Fat Rascal’s two founders so soon after leaving acting school is an illustration of the strength of British theatre and the seemingly limitless opportunities for aspiring actors, writers, dramatists and artists. 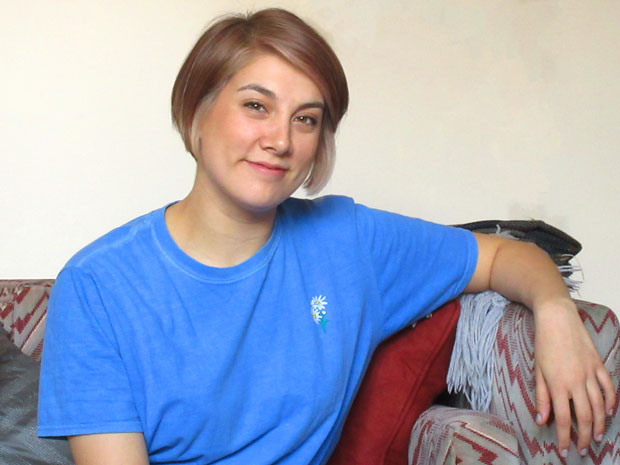 The Bull Theatre drama classes inspired former Barnet schoolgirl Allie MunroMs Munro’s love of theatre began when she and a friend, Katharine Armitage, who both lived near Ravenscroft Park, staged plays in the garage at Katharine’s house.

“We were only seven or eight and we called it the Blue Hutch Theatre – named after Kathryn’s blue rabbit that lived in the garage. We used to raise money from our performances for Cherry Lodge cancer care.”

Ms Munro then did after-school acting classes at the Bull Theatre, and also with Stagecoach in East Barnet, before securing a place at East 15.

“We followed that at the Drayton Arms theatre in Kensington with a pantomime, Puss in Boots, a political musical comedy about an evil king who locked up the queen, at the time when Donald Trump and Hilary Clinton were constantly in the headlines.”

For the 2017 Edinburgh Festival, Robyn wrote another comedy musical, Tom and Bunny Save the World, all about how Britain survives when taken over by zombies who turn out to be strong, feisty female characters.

Fast Rascal’s fourth production was Beauty and the Beast, another musical parody based on a gender swap between boys and girls.

Vulvarine, which is now on a UK tour, was written for the 2018 Edinburgh Festival, and again stars Allie as a feminist super hero who takes on and defeats a typical condescending mansplainer played by Robyn.

“Comedy theatre is a great British success. We do dry comedy so well in this country and audiences do relate to it.

“Feisty women are a running theme in our productions, not just girl friendly, but leading the story line.

In a way Brexit has helped us, giving Robyn so many themes to exploit and plenty of punchlines.

“Robyn has pulled together a tremendous team since she set up Fast Rascal. We now have a producer Laura Elms; we get help from a composer; and all chip with ideas for our song and dance routines. To begin with we were just scraping by financially, but we are now getting an income from our efforts.”