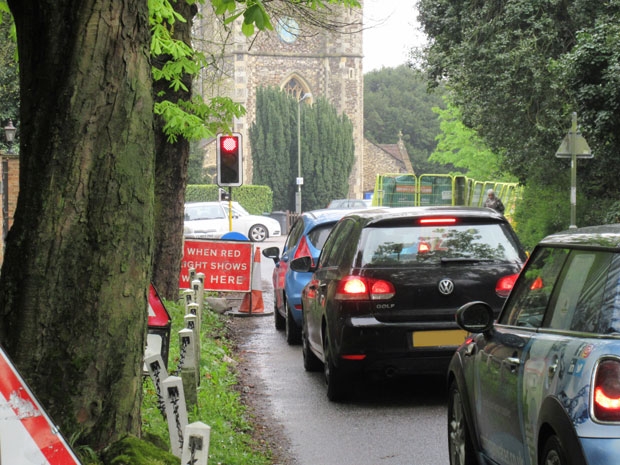 Trafic queues at Monken Hadley
Thames Water are warning that it will probably be the end of July before there is a final end to the roadworks that have led to road closures and restrictions on traffic passing through the historic village of Monken Hadley.

A weight restriction and temporary traffic lights have been in operation since February after the construction of a temporary bridge over a collapsed sewer.

Earlier this year Drury Road was closed for weeks – causing widespread disruption – following the collapse of the sewer and the discovery in the immediate vicinity of several sink holes and gas leaks.

The temporary bridge was installed on February 17 and this has allowed single file traffic – but no heavy good vehicles – to pass through the Monken Hadley gates, but this temporary repair will have to be dismantled once excavations start at the beginning of May to rebuild the sewer network.

Thames Water say the “expected finish date” for the project is July 23.

Delays in repairing the damaged 12-metre section of underground sewer in front of St Mary’s Church are the result of the difficulties Thames Water face in carrying out such work in a conservation area, so close to listed buildings.

Structural and drainage surveys have been conducted to prepare a plan for the work that is acceptable to nearby property owners and that will allow the excavation to be undertaken safely.

In a statement, Thames Water says the company is working closely with the owners of nearby buildings and has met Barnet Council to arrange a permit for the work.

“A finalised programme of works is being put together. Our aim is to start at the beginning of May with an expected finish date of July 23.

“We still intend to hold a meeting for our customers so we can show them our plans and address any queries they may have about the work.”

Theresa Villiers, MP for Chipping Barnet, welcomed the re-opening of Drury Road after the installation of the temporary bridge over the collapsed sewer on 17 February.

But she says the temporary lights and 3.5 tonnes weight restriction are causing problems and delays and she intends to keep up pressure on Thames Water to complete the road works as soon as possible.