Queen Elizabeth’s Boys’ School – an academic hothouse at the expense of local boys? 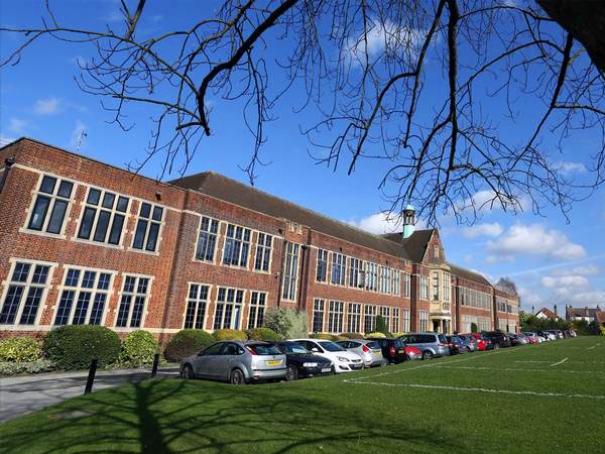 Could the school do more to celebrate its local connections?
Around 2,000 boys from across London and the Home Counties are again expected to apply to study at Barnet’s award-winning Queen Elizabeth’s Boys’ School, which has just begun the selection process for the 180 places that will be available in September 2015.

Neil Enright, headmaster at QE Boys for the last three years, has spoken out in support of an admissions system that reverted twenty years ago to a grammar school entrance test at 11-plus.

In an interview in The Independent, he justified continuing to attract boys from across London and the surrounding counties and defended an admissions policy that no longer drew pupils solely from what he described as the “immediate, affluent area” of the school’s original catchment area around High Barnet.

But among many local parents there is a sense of resentment and even of anger at the rejection of boys who do meet the school’s criteria and who cannot gain high enough marks on the entry test for so few places in such a large field.

These parents ask, what price excellence: has High Barnet gained an academic hothouse, but lost a local school?

For his part, Mr Enright insisted that QE Boys was still pursuing the aims of the 1573 charter from Queen Elizabeth 1 that established a free school for boys from all walks of life.

He said ninety per cent of its 1,200 pupils were from ethnic minority groups, including many from Asian, Chinese or Afro-Caribbean origins, and he considered this was “a reflection of the make-up of the north-west London community”.

In terms of the national deprivation index, the intake reflected broadly the average for the country.

After its outstanding academic success last year, when it topped the list for A-level results of the 100 most successful state secondary schools and became one of only two schools in the country to get a 100 per cent pass rate in the new English Baccalaureate, Queen Elizabeth’s achieved Gold Club status in the awards scheme of the Mayor of London, Boris Johnson.

One of the Mayor’s objectives is to ensure London’s exceptional schools share their experience with other schools, which prompted the Barnet Society to ask if QE Boys was planning any fresh initiatives to share its educational prowess, or perhaps do more to celebrate its local connections and historic heritage.

Among many local parents there is a sense of resentment

Unlike Queen Elizabeth’s Girls’ School, which is a comprehensive serving the High Barnet area under an admissions process co-ordinated by Barnet Council, Queen Elizabeth’s Boys’ School no longer has a designated catchment area having become a selective grammar school.

Boys who wish to study at the school sit an 11-plus entrance test which is held each September – for the 2015 intake, entrance test request forms must be received by the school by 23 July 2014.

In his interview for The Independent (10.4.2014), Mr Enright acknowledged the newspaper’s description of the school as being situated in the heart of what would, by any standards, be described as “a very leafy, suburban, white, British-dominated territory”, but the school’s intake reflected the “whole economic spectrum”.

“We take boys from all over London – Greenford, Ealing, Hayes and towards Heathrow.  Some travel the length of the Northern line or come from Essex or Hertfordshire.

“People come here with fixed conceptions that the school is a product of being in a very middle-class enclave. But many of the boys who graduate from this school will be the first in their family to go to university.”

QE Boys’ website www.qebarnet.co.uk describes the school’s progress from its foundation in 1573 and the changes in status that followed the decision in 1970 to convert the original grammar school into a comprehensive. From an establishment of 300 pupils, the school grew year by year to become a 1,200-strong comprehensive by 1976–7.

In 1989 QE Boys’ became one of the first schools to secure grant maintained status; it reverted to a selective intake in 1994; and then achieved academy status under the framework of the current coalition government.

In a follow-up to Mr Enright’s interview, the Barnet Society asked for the school’s response to a number of questions which are often posed by local parents:

These questions were left unanswered, but the school gave a lengthy explanation of the actions it was taking in line with its Gold Club status and the hope of the Mayor of London that exceptional schools share their practice and experience with other London schools.

Queen Elizabeth’s Boys’ headmaster Neil Enright told the Barnet Society that the school is playing its part in enriching the local community while remaining “a centre of academic excellence from where boys of any background, however humble, can succeed”.

School facilities such as halls and swimming pool are regularly hired out to local groups, including swimming clubs, Barnet Choral Society and the Barracudas children’s club.

As part of its outreach programme children from local primaries use QE Boys’ music technology facilities, and every year 300 children from its five partner primary schools (Foulds, Christ Church, Frith Manor, Moss Hall and Bushey Heath) are invited to a concert by the full symphony orchestra and to learn about musical instruments.

Discussions, debates and engineering competitions are held jointly with other local secondary schools. There has been collaboration in music and dance with Queen Elizabeth’s Girls’ School.

Sixth formers at QE Boys are required to do voluntary work that benefits the local community. Currently volunteering is taking place in local old people’s homes and charity shops.

The school’s musical ensembles such as the chamber choir and saxophone quintet have performed regularly in homes for the elderly.

Historical data from QE Boys’ archive is being shared with volunteers at Barnet Museum who are researching the backgrounds of the Barnet men who lost their lives in the First World War and whose names are commemorated on a local war memorial.

A translation of the charter establishing the “Free Grammar school of Queen Elizabeth” for the “inhabitants of our town of Barnet” is available at Barnet Museum.

It opens with the words:

Elizabeth by the grace of God of England France and Ireland Queen Defender of the Faith:

“To all whom this present writing shall come greeting know ye that we at the humble request of our well beloved cousin and counsellor Robert Earl of Leicester, Knight of the Most Noble Order of the Garter, Master of our Horse in behalf of our faithful and liege subjects the inhabitants of our town of Barnet in the counties of Hertford and Middlesex there to erect and forever to establish a grammar school for the education learning and instruction of boys and youth there to be instructed brought up and taught of our Special Grace certain knowledge and good pleasure for ourselves our heirs and successors to will grant and order that for the future there be and there shall be one common grammar school in the said town of Barnet or near the same which shall be called the Free Grammar School of Queen Elizabeth for the education bringing up and instruction of boys and youth.”

More in this category: « 34 bus route too costly to extend Petition for new primary school in High Barnet »