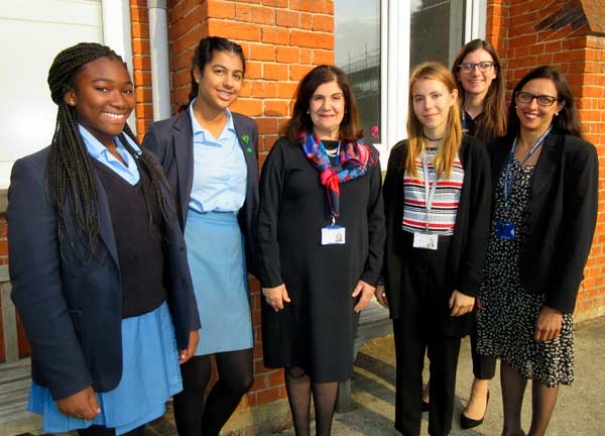 Violet Walker, head teacher of QE Girls, with students and teachers. From left to right, Nanaekua Minta, Afsham Fareed-Birtill, Mrs Walker, Anna Taylor, Lindsey Southwell and Deepika Makkar.
Record GCSE and A-level results for the second consecutive year have now been topped by the news that Queen Elizabeth Girls’ School, Barnet, has been ranked in the top 2 per cent of all secondary schools by the Department of Education.

QE Girls is now placed 47th among all secondary schools and is the top performing non-selective all-girls comprehensive.

Head teacher, Mrs Violet Walker – a former QE Girls pupil and teacher -- is confident the school is heading back to its former glory days.

In March 2014 its teaching standards were questioned by OFSTED and the staff were told their performance required improvement.

Since Mrs Walker took over as head teacher at the start of the 2015-16 academic year there has been a dramatic turn around.

On the back of its latest results, QE Girls’ is in the top 1.3 per cent of schools where pupils are performing better than expected at primary level, and in the top ten per cent of sixth forms.

Mrs Walker is hoping GCSE and A-level results in the current academic year will set another record and she is confident the school is taking the steps needed to maintain its turn around.

“I really believe QE Girls’ is now in a position where it can return to its glory days when it was the local go-to-school for girls.

“My parents moved to Barnet in the 1960s so that we would be in QE Girls’ catchment area, and in the hope that I could go there if I passed the 11-plus exam.

“Demand for places shows we are on the right track, and I am so pleased that the girls are now enormously proud of wearing the QE Girls’ uniform.”

Over 1,000 prospective parents attended the open day in September and there is now a waiting list for all ages. The distance for the catchment area had to be reduced and is currently homes within three miles of the school. Each year 180 girls are admitted at age 11, and the school is oversubscribed by three to one.

Mrs Walker believes the school’s success in GCSE and A-level is in large part due to the attention paid to tracking pupil performance and then using that information to have a timely impact on a student’s work and choices.

“Our declining A-level results prior to 2014 were probably influenced by putting pupils on the wrong courses and not following through with their work. Now we match the information with the teaching and encourage a strong morale purpose.”

At the end of the 2016-17 academic year 79 girls secured qualification suitable for university entry; 65 received a university offer; and 26 per cent of the students went to Russel group universities.

Mrs Walker’s return to QE Girls’, where she was a pupil in the 1970s and then returned in the early 2000s as part of her training as a maths teacher, has won praise from the 2017 Good Schools Guide, which says the school is a relaxed, safe and friendly place, with “a firm hand on the tiller and rocketing results.”

On the day the Department of Education announced QE Girls’ new place in the schools’ rankings, she was joined for a photograph by three well-placed students.

Nanaekua Minta (12) said her first year at the school had been an amazing experience and she had made a lot of progress.

Next year’s GCSE exams are the focus for Afsham Farred-Birtill (15), who is studying triple science and is one of QE Girls’ team for the Young Scientist of the Year contest.

Anna Taylor is in her first year of the sixth form studying English Literature, Geography and History at A-level. At GCSE she secured ten passes a A* and one at A.

She was full of praise for the school’s English department and its out-reach. Pupils had been reading their own stories to pupils at St Catherine’s primary school.

Anna was looking forward to the next highlight: a trip to Stonehenge where they would have the chance to stand around the stones and read out loud from Thomas Hardy’s Tess of the D’Urbervilles.

Deepika Makkar, an assistant head, praised the girls’ commitment as QE Girls’ English department was now in the top one per cent of schools for English results.

As QE Girls’ staff and pupils set their sights on next year’s GCSE and A-level exams, Lindsey Southwell, head of the sixth form, looked forward to future successes.

“It’s a fantastic time to be teaching at QE Girls and I am sure we can get even higher in the school rankings. We were in the top 25 per cent for sixth forms, now we are in the top 10 per cent and the aim is to get in the top 5 per cent.”