No shortage of demand for donated food 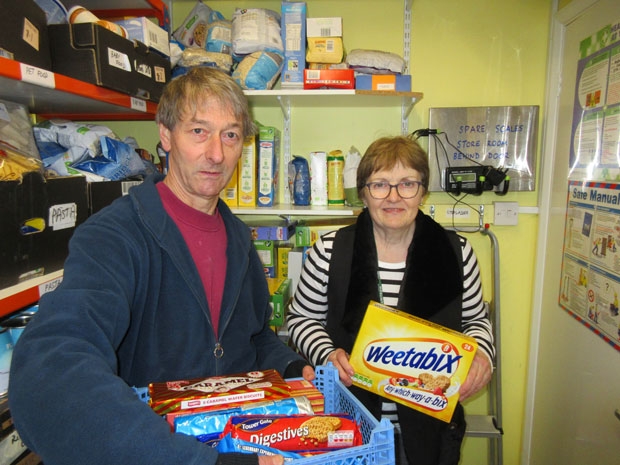 Chipping Barnet foodbank volunteers Harold Williams and Monica Phelps prepare food items ready for distribution
Chipping Barnet foodbank is currently experiencing a spike in demand following the introduction of universal credit which is resulting in some social security claimants finding themselves caught out by the loss of previous benefits.

Barnet is one of the areas where the switch to universal credit is underway and volunteer helpers believe this is leading to arrears in payments, a rise in hardship and an increase in requests for food and essential supplies.

The foodbank – at St Peter’s Roman Catholic Church, Somerset Road, New Barnet – is open on Tuesdays between 12 noon to 2pm, and on Saturdays, between 10am and 12 noon.

At the Tuesday foodbank, one woman who arrived early said it was only her second visit.

She was desperate for help because she said her social security payments were £400 in arrears. Her job seeker’s allowance and housing benefit had both been stopped but her first universal credit payment had yet to be paid.

“I’m now behind with my rent and council tax, and it is very worrying for me and my boy, who is at college and who gets very hungry. It has been a real relief being able to come to the foodbank.”

Her story was said by foodbank warehouse manager, Harold Williams, to reflect the added hardship that has resulted from Barnet’s inclusion in areas where social security claimants are being switched to universal credit.

Chipping Barnet foodbank, established in 2012 and now supported by 160 volunteer helpers, has experienced a steady increase in demand.

Mr Williams was full of praise for the generosity of Barnet residents, worshippers at seven churches, local schools and shoppers at the High Barnet and Whetstone branches of Waitrose and Morrisons at Boreham Wood, who all help to make sure the foodbank is well supplied.

People needing help arrive with a voucher after being referred to the foodbank by a wide variety of local charities, agencies, doctors, priests and other front-line staff.

All donated food is stored and distributed according to sell-by dates and by keeping strictly to the expiry dates the foodbank ensure that as little as possible is wasted.

As well an allocation of tins of meat, fish and vegetables, soups, cereals, puddings, sugar, tea, coffee and other essential non-perishable foodstuffs, the foodbank has a table offering extra teats where people can help themselves to whatever else might have been donated.

“At present we still have a selection of surplus Christmas treats that people can choose from the help-yourself-table. That is where we can offer other items, for example tinned and packet products that might just be passed their best-before dates but are still entirely wholesome,” said Mr Williams.

Since I have been helping, we have noticed an increase in the number of people coming to the foodbank who are in work but who still need help

“We do make use of almost everything we are given, and we are proud to say we throw away less than half of one percent of all the food that is donated.

“One donation that definitely had to go in the bin was a 1995 tin of Plumrose chopped ham and pork. That’s the oldest item we’ve ever been given since we started in 2012 – but the Cardiff foodbank beat that with a 50-year-old tin of Campbells tomato soup.”

At the Tuesday foodbank, team leader Monica Phelps checked the vouchers of those seeking help and assessed their needs. Once they have been given their food allocation form – with varying amounts for single people and families – other volunteers hand out the food.

“We never really know how many people will arrive, but it has been noticeably busier recently and sometimes we have people queuing up outside the door.

“Since I have been helping, we have noticed an increase in the number of people coming to the foodbank who are in work but who still need help.”

“It is very satisfying helping clients with other problems. Over a cup of tea and biscuit, we can do quite a bit of signposting, telling them about housing agencies or practical things like the names of local toddler groups.”

Perhaps the most impressive aspect of the foodbank is the care which is taken in sorting and stacking donated food. Students on the Duke of Edinburgh Awards scheme help the volunteers.

All donated food is weighed in and weighed out as this provides a simple way to monitor what is happening. The statistics give an indication of the scale of the foodbank’s operation:

More in this category: « Plans for memorial to Millie, High Barnet’s feline celebrity Barnet Beyond Brexit »