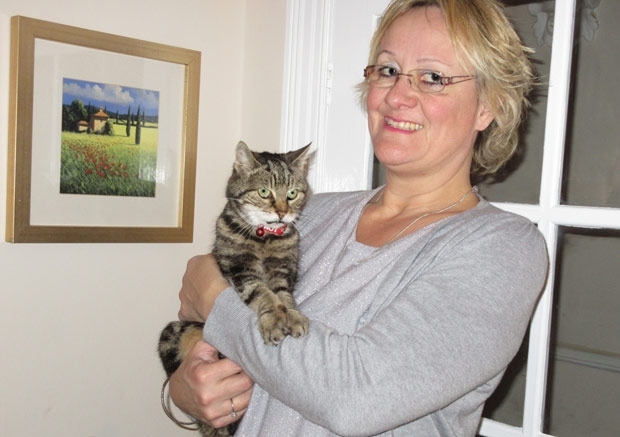 Paula Gabb and Millie in happier times
Well over £1,200 has been donated already by well-wishers towards the cost of a memorial to the 17-year-old tabby Millie who made friends with countless admirers at the Spires shopping centre.

Paula Gabb set up a fund after her much-celebrated pet – known locally as the library, Waitrose or Spires cat – died “peacefully” after being poorly for some time with a thyroid problem.

When so many of those who paid online tributes to Millie – on the Barnet Society website, Nextdoor and Facebook – suggested she should be remembered in some way, Ms Gabb took their advice and started a Go Fund Me appeal page.

“I knew everyone loved Millie, but I’d no idea the affection for her was anything like this.

“The response has been amazing. In less than a week £1,621 has been donated.”

Ms Gabb intends to ask the Spires’ management whether it might be possible to put up a plaque to Millie, perhaps even a statue, or perhaps more likely a bench which could be in her name.

Any surplus funds will be donated to the RSPCA rescue centre at Southridge, where Ms Gabb was given Millie.

She made her name by regularly stationing herself outside the Waitrose entrance in the Spires and courted the attention of an endless stream of shoppers and passers-by.

Such was her love of adventure that she mastered the walk across the Stapylton Road zebra crossing, regularly stopping the traffic as she went from the library across to the Spires or returned to her home in Carnarvon Road.

Ms Gabb said that Millie had been on medication for some months after being diagnosed with a thyroid condition.
“She had improved in recent weeks, but I knew she didn’t have long, and she passed away peacefully.

“She will be sadly missed by me, my sons, and all the lovely people to whom she gave so much joy, love and amusement. RIP dear Millie.”

A trip to Waitrose will never be the same again

Online tributes to Millie expressed sadness at the passing of a “real local character” who so loved attention – and the odd tin of cat food, despite all Ms Gabb’s efforts to persuade kind-hearted people not to give her food.

“A trip to Waitrose will never be the same again,” said one admirer expressing her sorrow at Millie’s death.

Millie first gained notoriety when she became a regular visitor to Barnet library, often settling down in a comfortable chair for a quiet snooze away from the excitement of the dogs that Ms Gabb cared for.

Once the library closed for alterations and new security procedures were introduced, she became a regular visitor to the Spires, and was not averse to making her way to the Waitrose fish and meat counter – only to be hustled out by the manager.

On other occasions she could be found having forty winks in other nearby shops.

Most recently she started venturing further afield waiting to greet customers outside the KFC Kentucky Fried Chicken restaurant or Harry’s the butchers.

Such was Millie’s fame that she has three YouTube videos to her name and has had hundreds of likes on Nextdoor and Facebook.

No doubt the consensus among Millie’s many admirers will be relief that she died peacefully rather than meeting a sticky end crossing the road.

Ms Gabb has already started writing Millie’s biography – she says so many people have asked her to tell the story of a very special cat.

More in this category: « Tributes after death of feline celebrity No shortage of demand for donated food »