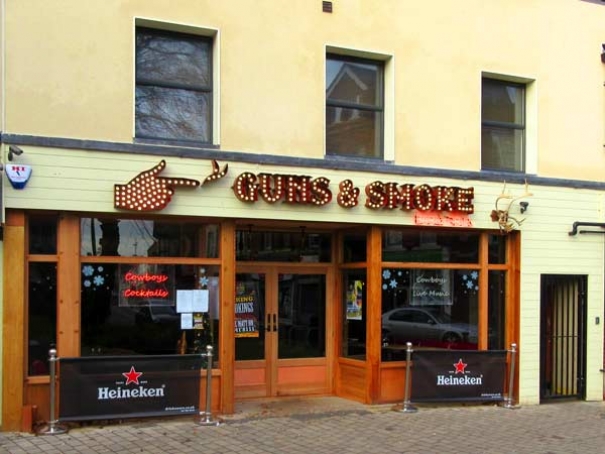 Barnet Council’s planning committee voted almost unanimously to reject an application seeking approval for alterations to the much-disputed facade of a building that at one point was said to resemble a Swiss chalet because of the extensive use of timber cladding.

Guns & Smoke opened late last autumn without the appropriate planning approval for its new frontage and illuminated signage, and its appearance at the heart of the High Barnet conservation area has divided opinion.

Some local residents think it is too bright and garish while others have welcomed the new venture, saying it has brightened up Church Passage and is a popular venue, attracting a new clientele to the area.

A meeting of the planning committee (8.1.2015) had little hesitation in rejecting the new frontage, including its illuminated fascia.

Ignore the irony of a restaurant named Guns & Smoke overlooking
a memorial to the most appalling conflicts in human history.

At the vote, there were six against the application, no member in support and one abstention.

Robin Bishop, who is chair of the Barnet Society’s planning and environment committee, said the planning committee’s clear-cut decision was an important victory for the Society and fifteen other local objectors.

In his presentation to the meeting, Mr Bishop said the Society considered unauthorised changes made to 1 and 1B Church Passage in both 2013 and 2014 were an important test case for the Chipping Barnet Town Strategy which was adopted eighteen months ago with the aim of “encouraging high quality buildings and public spaces ... to help foster local distinctiveness”.

“These alterations comprise the most serious and conspicuous of a number of infringements that have occurred in conservation areas in recent years – several of which, despite enforcement procedures, have yet to be rectified.”

The churchyard of St John the Baptist, its war memorial and Church Passage were in effect High Barnet’s principal civic space, and the buildings in Church Passage were the most visible to every traveller turning into the High Street from Barnet Hill.

In support of his argument against the granting of planning approval, Mr Bishop reminded the committee that the area around the parish church had been re-landscaped at considerable cost.

“Ignore the irony of a restaurant named Guns & Smoke overlooking a memorial to the most appalling conflicts in human history. 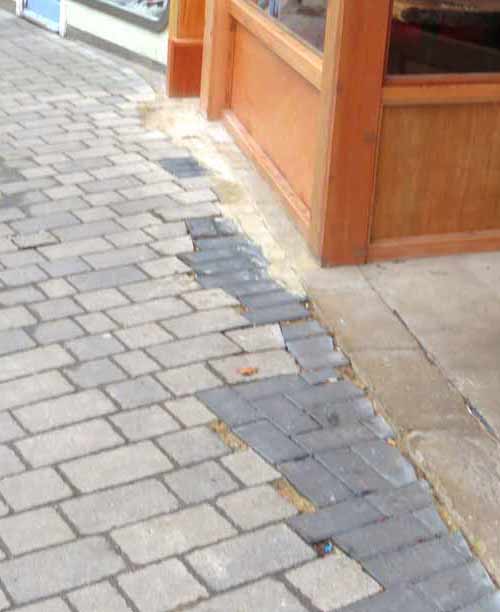 Consider simply the money wasted by ripping out the previous shop-front and canopy and damaging an attractive new pavement – thousands of pounds paid by us, via council tax and the Outer London Fund, less than three years ago.

“Unless you take a stand against these mediocre proposals now, the council’s policies – and the efforts of the Town Team – will be widely perceived as worthless.”

Mr Bishop acknowledged that other alterations to the side and upper parts of the Guns and Smoke building were outside the scope of the current application but the Society believed that the facade should be treated as a whole when its future was examined by the planning department.

If the complete restoration of the Church Passage frontage, as required by a planning inspector in January 2014, was considered to be impracticable, he said the Society hoped there could at least be “a design of restraint and dignity, in line with the council’s published guidance, as befits Chipping Barnet’s most prominent civic and religious setting”.

More in this category: « Building on the fringe UK's first purpose-build co-housing starts in Barnet »