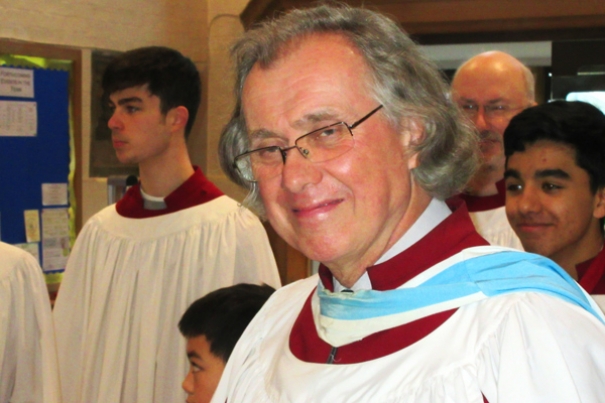 Terence Atkins with choristers
Maintaining the great musical tradition of Barnet parish church has been the outstanding achievement of Terence Atkins, its organist and choirmaster for the last 40 years.

His role in training and encouraging successive generations of young choristers was marked with a special choral evensong attended by former members of the choir, and representatives of Barnet’s past and present clergy.

Among those attending the 40th anniversary choral evensong in his honour (10.1.2015) were former Barnet chorister, Roderick Williams, now an operatic baritone, who was the soloist at the Last Night of the Proms in 2014, and the Reverend Canon Michael Webb of Keswick, who was curate when Mr Atkins started at the parish church.

Another former chorister who joined in the tributes was George Mpanga, a spoken-word artist known as George the Poet for his socially aware poetry.

Mr Mpanga is a former pupil of Queen Elizabeth’s School.

Mr Atkins took up his post at the Parish Church of St John the Baptist in January 1976, after he had served six years as organist and choirmaster at St Peter’s Church, Sutton Coldfield.

He told the Barnet Society that his 40 years at Barnet had been so fulfilling because he had been able to play his part in maintaining St John the Baptist’s fine musical heritage.

Currently the choir is made up of 16 boy choristers, who usually start as trebles at the age of seven or eight, and 16 men.

“What is such a great source of satisfaction for a choirmaster is that Barnet has a long-standing tradition of the trebles staying on as altos, tenors and basses, so we have a great sense of comradeship as a choir.

We are always encouraging new choristers to join us, and yes, it has sometimes been a challenge, but always a rewarding challenge being choirmaster.

“As you can imagine, the choral evensong celebration was a special moment not just for me, but for the parish church, a re-union for former choristers and the local clergy.”

One of the lessons was read by Mary Butler, wife of the late Reverend Bernard Butler, a former rector of St John the Baptist.

Mr Atkins paid tribute to the work of the assistant organist, Alan Parrish, who had been in post longer than he had.

Concerts and musical evenings are held regularly at the parish church. The next concert is Brahms’ Requiem on Saturday 13 March.