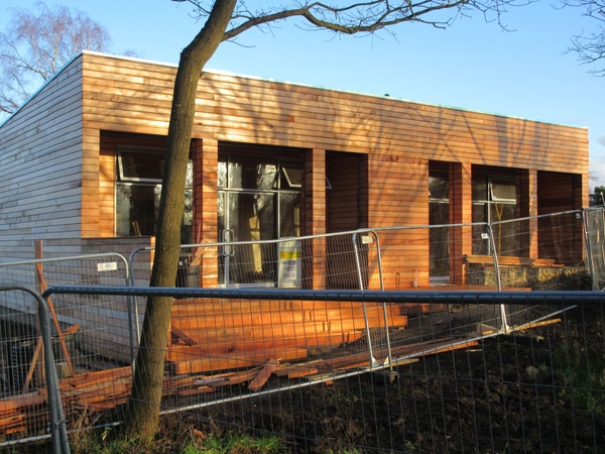 The new centre nears completion
Finishing touches are being added to the newly built, eco-friendly Barnet Environment Centre in Byng Road, ready for its official opening in the spring.

Construction work was held up when the previous contractor experienced financial difficulties, but another company, Bespoke Construction, has taken on responsibility for completing the project.

The internal “final fit” should be finished by the end of January.

Dick Elms, chair of trustees for the Friends of Barnet Environment Centre, says that after the delays of the last few months, it is no wonder volunteers are eagerly awaiting completion of the work.

“As you can imagine, we are getting very excited at the thought of moving into such a wonderful, purpose-built centre.” 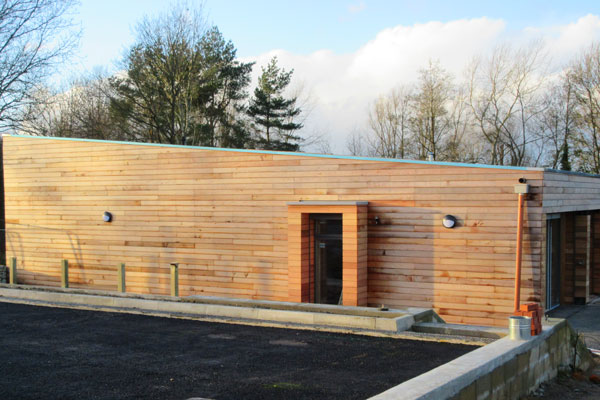 The New Environment Centre seen from the car park

Cedar cladding and a living roof planted with sedum and cedar cladding are just two of the environmentally friendly features of the new centre, which is preparing for another busy year of school visits to its eight-acre nature reserve.

Volunteers have spent the last few months clearing away falling leaves, cutting back hedgerows along the paths and removing brambles from the meadow.

Unusually good weather over the autumn term allowed several schools to take advantage of the range of wildlife active on the reserve. One of Barnet’s Brownie groups took part in arts and crafts activities, and had great fun doing bark-rubbings.

Completion of the new environment centre is the first phase in redeveloping the former Byng Road School buildings, also the site of a new six-bed complex to be built by the Noah’s Ark Children’s Hospice.

So far Noah’s Ark has raised £4.79 million towards a £10.55 million appeal to build what will become north London’s first children’s hospice.

The new hospice will become a hub for children’s palliative care services across north London, and provide a base for training and volunteer development.

When foundations for the new hospice were laid in January 2015, Noah’s Ark said the aim was to start construction work sometime in 2016.

The site of the former school, together with the nature reserve, is under the joint control of Noah’s Ark and the London Wildlife Trust. In order to enter a legal agreement for the use of the centre and the reserve, the

Friends of Barnet Environment Centre have applied to the Charity Commission to register to become a charitable incorporated organisation.

More in this category: « Concert rounds off 2015 at QE Girls Former choristers pay tribute to Barnet church organist and choirmaster »