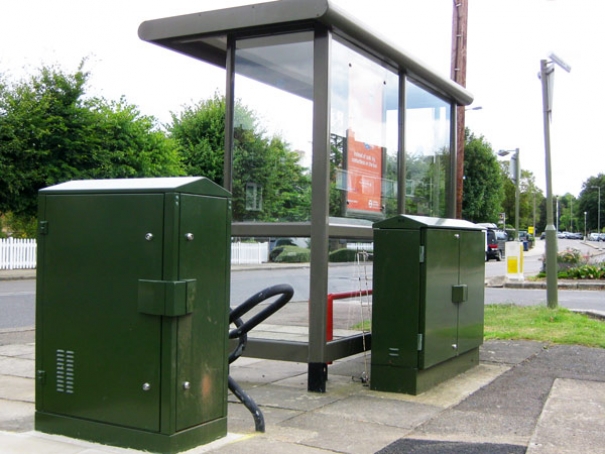 High Barnet needs another nine additional cabinets to complete the roll-out of high-speed broadband
The Barnet Society’s campaign to force British Telecom to complete High Barnet’s roll-out of high-speed broadband will get the continued support of Theresa Villiers, the Chipping Barnet MP, but she has warned that many local householders will fail to get an improved service.

So far the Society’s petition demanding BT honours its promises has attracted 117 signatures. Mrs Villiers said she understood the annoyance and frustration of local residents who have been complaining for years about slow broadband speeds, and she was doing what she could to help them.

She told a question-and-answer session held by Barnet Residents Association (7.11.2014) that she believed BT were looking again at the possibility of installing some of the nine additional fibre-enabled cabinets that are required.

The MP had been assured that the roll-out was continuing with a new finish date of spring 2015; further cabinets would be connected in addition to the only extra cabinet installed so far, at the bus stop beside Hadley Highstone.

“As the local MP I will continue to put the case to British Telecom but unfortunately the reality is that there will be many households in High Barnet that will not be given access to high-speed broadband.”

There had been a planning problem in High Barnet when new boxes were rejected and the funding had rolled on to other projects.

“But the rules have changed; now planning is not a problem and BT can install cabinets under permitted rights.

However, the presence of other underground services is a problem.”

Mrs Villiers said the “frustratingly slow” broadband speeds were a real issue in both High Barnet and Totteridge.

BT say they expect 90 per cent of Greater London will have access to super-fast broadband by next spring.

“Unfortunately the roll-out will be unevenly spread.

A number of cabinets that have not been upgraded will now be fibre-enabled but even when the programme is finished next spring there will be some cabinets that are not commercially viable for an upgrade.”

Comments left by residents who have supported the Society’s petition reveal the depth of local anger and frustration:

“Do not consign High Barnet to the dark ages”

“Rubbish broadband speed . . . I have faster internet on my mobile phone”

“Hard to operate a business with very slow internet connection”