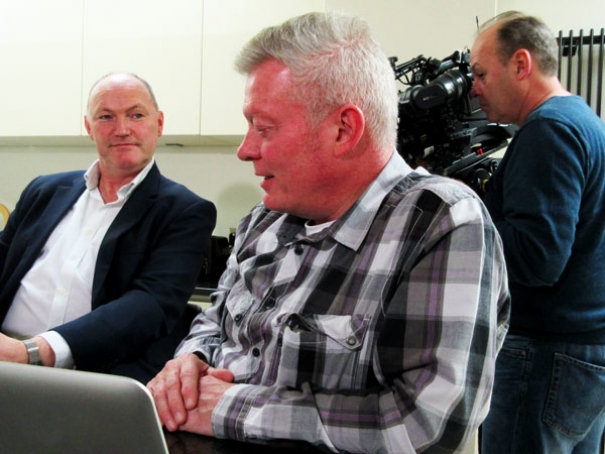 Sky News’ senior correspondent Ian Woods (left) interviews Ken Rowland, organiser of fibre4barnet, together with cameraman Tom Radburn
High Barnet’s dire broadband service was highlighted by Sky News when it featured a campaign by a cross-party group of MPs to try to secure the break-up of British Telecom as the only way to achieve faster internet connections.

The Barnet Society estimates that there are 3,000 homes in streets in and around the centre of High Barnet that are without a superfast connection. Eight new fibre-enabled telephone cabinets need to be installed.

Download speeds in 10 per cent of households across the UK fail to meet the standards set by the regulator Ofcom.

BT Openreach admits that only 5 per cent of these homes can expect any improvement, but that may not be until the end of 2017, a performance that the 121 MPs say is so inadequate that it warrants the break-up of BT, and hiving off Openreach as a separate company.

So far, despite repeated promises to BT’s Barnet customers, only one small group of homes in and around Hadley Highstone have been included in BT’s much-hyped rollout programme.

One additional cabinet was installed some weeks ago in Wood Street, near the Black Horse public house, and some work has been done near existing cabinets at the Wood Street entrance to the Old Court House recreation ground and at the top of Bells Hill.

But customers of these three cabinets are being told it will be another four to five months at least before they can apply for superfast broadband, and households served by the other five cabinets have been given no indication whatsoever as to when they might be able obtain a faster connection.

Sky News’ senior correspondent Ian Woods was given a run-down on High Barnet’s plight by Ken Rowland, organiser of the fibre4barnet campaign. The broadband service at Mr Rowland’s home in Salisbury Road is less than 2 megabits per second, way below the 10 megabits per second stipulated by Ofcom.

Mr Rowland has been investigating the chances of High Barnet residents raising £16,000 to pay for a wireless network to be installed in the town by County Broadband, which supplies superfast broadband services via masts on church towers, steeples and other high buildings. 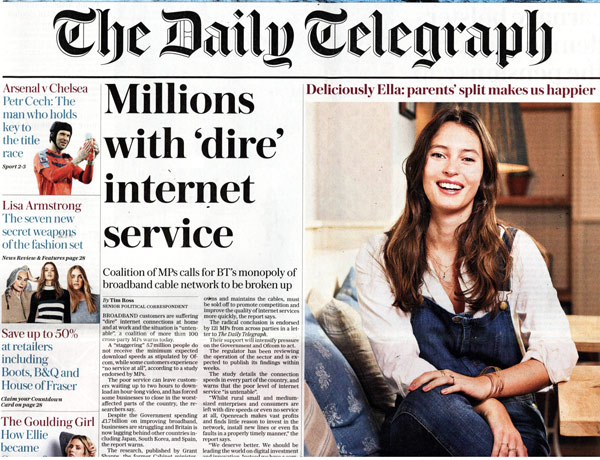 Another possible supplier is Virgin Media, which sent two representatives to meet the Chipping Barnet MP Mrs Theresa Villiers to discuss the possibility of Virgin’s broadband network, which already operates in Potters Bar and Enfield, being extended to High Barnet.

Emilie Boman, Virgin Media’s senior public affairs manager, told Mrs Villiers and a group of Barnet residents (22.1.2016) that the company would consider extending its broadband cable service to High Barnet if there was sufficient demand, and if it could obtain the co-operation of Barnet Council.

Virgin Media is investing £3 billion in its UK network and offers customers an entry level of 70 megabits per second, way ahead of the speed being supplied by BT. The aim was to connect four million homes and other premises by 2020, and much of that expansion would be obtained by infilling in areas such as High Barnet that lacked a superfast service.

Before the company could proceed it would need an estimate of the likely take-up, and an indication as to whether the local council would give the necessary consent for roads and pavements to be cabled.

Ms Boman said it was up to local residents to prepare a case, but given the density of houses in High Barnet and the fact that much the town had been overlooked in BT’s roll-out ten years ago, an extension of the Virgin Media network did seem to be “a feasible option”.

Grant Shapps, the former Conservative Party chairman, is one of the MPs leading the campaign for a radical overhaul of the internet market and the break-up of BT’s monopoly.

A study by the MPs of their experience in 121 constituencies across the country estimates that 5.7 million people do not receive the minimum download speeds stipulated by Ofcom, while some customers experience no service at all.

Over £1.7 billion has been spent by the government trying to improve broadband services, but the MPs believe the only way to improve the service is by promoting competition.

Gavin Patterson, BT’s chief executive, told the BBC that the 10 per cent of customers who could not get superfast broadband should receive a faster connection by the end of 2017, and BT was looking for further government support to reach the final 5 per cent.