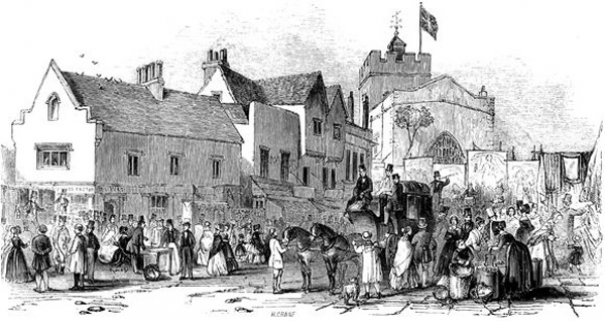 Barnet Market circa 1800
If permission is granted to demolish the empty After Office Hours bar next to the Bull Theatre, the Barnet Society says there must be stringent planning conditions, and time for a proper archaeological investigation.

Such is the poor state of the existing fabric of the building that demolition is considered unavoidable, but if approval is given time should be allowed to afford archaeologists the chance to see whether there are any significant remains given its location near the original site of Barnet’s medieval market.

A planning application has been submitted to Barnet Council to pull down the bar, at 70 High Street, and replace it with new licensed premises with seven self-contained flats on the upper floors.

Robin Bishop, chair of the Barnet Society’s planning and environment committee, has written to Barnet Council expressing serious concerns about some aspects of the plan.

While welcoming residential development on the two upper floors, especially if a number of units were to be affordable, the Society is sceptical about the need for another drinking establishment in the High Street.

There would need to be “stringent conditions” regarding underpinning and foundations for the new building, and great care taken with the party walls.  Since the site is landlocked except for the High Street frontage, access would be an issue.

Susi Earnshaw, whose theatre school is based in the Bull, fears the demolition and construction work could cause “tremendous upheaval” for her teachers and pupils.

I don’t know how we are going to keep operating through all the noise and mess that will be going on for at least a year.

Ms Earnshaw says the After Office Hours building should not have been allowed to deteriorate to the point that it needs to be demolished. 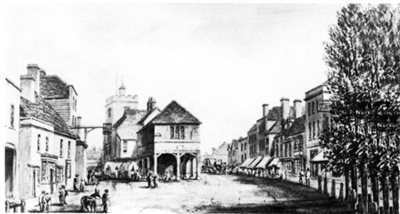 Another High Street planning application has also sparked controversy. If approval can be obtained, flats would be built above and at the rear of what was once Lloyds Bank, but is currently vacant after the previous tenant, Specs Direct, moved to new premises.

The former bank, at 85 High Street, is a locally listed building, within the town centre conservation area, and there is concern about possible changes to the frontage on to the High Street, which would include two new front doors and a smaller shop unit.

Robin Bishop says the plans would have to be examined in great detail. “The former Lloyds is one of the neo-classical buildings that, along with the Old Courthouse, the Hyde Institute and our two former town halls bring class – in the best sense – to our town centre.”

Both applications can be viewed on the Barnet Council website pages for planning applications or via the links below.