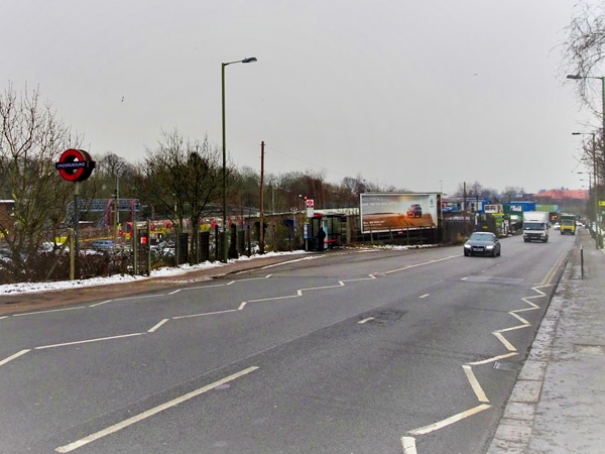 Land around High Barnet Station is likely to be built over for high-density housing if the Mayor of London's draft London Plan is adopted. The site could include the car and container parks, and possibly space above the station and sidings.
Over the last 18 months, Sadiq Khan has been consulting Londoners about aspects of a new London Plan. It sets a framework for local plans across London. Unless Barnet produces more detailed plans or policies for Chipping Barnet, therefore, all developers need to do to get planning permission is to show that their proposal meets the London Plan – which is mainly a set of aspirations rather than specific design requirements.

Many aspects of Khan’s draft Plan are admirable and consistent with Barnet Society aims. But certain policy proposals of his, coupled with ambitious new housing targets, could have a massive – and detrimental – impact on our area.

It was essential to have our say on the draft London Plan, and what follows are edited highlights. The full submission can be read on our website. Many thanks to our Committee, Peter Bradburn, Judith Clouston & David Lee for their expert input.

We welcome the wide scope and far-sighted thinking of the draft London Plan, and agree with most of its policies.

However, as an area with important links to neighbouring Outer London boroughs and Hertfordshire, a high proportion of green space and a distinctly hilly landscape, we do not believe the draft Plan is sufficiently sensitive to local differences of geography, historical identity, or to suburban architectural and landscape character. Our chief reservations are detailed below.

The proposal for London to become a National Park City is quite consistent with our own aims, which are to defend the range and quality of Chipping Barnet’s open spaces.

In view of our close links with Hertfordshire, we would like to see explicit commitment to improving and harmonising cross-border transport planning and Oyster usage, especially with regard to bus connections between town centres, transport hubs, hospitals, schools and colleges.

We welcome the Mayor’s commitment to promoting and enhancing the vitality and viability of town centres like ours, and his recognition of the importance of balancing the demands of housing and commerce, including affordable business space.

We agree that higher-density development is a promising way forward – but only provided that it is carried out on a scale that relates to existing neighbouring buildings and greenery, and that its design is of high quality.

We strongly support the importance of high standards of design and sustainability, both for buildings and external spaces. We agree with the Mayor’s list of considerations for form, layout and design development.

We strongly agree with Section A that
The optimum density of a development should result from a design-led approach to determine the capacity of the site. Particular consideration should be given to:

These considerations are insufficient, however, in neighbourhoods like ours where significant areas of Green Belt and Metropolitan Open Space border – and often penetrate – the 800m-radius zones proposed by Policy H2 (below).

And while Para 4.2.7 prevents inappropriate densification within Conservation Areas, it says nothing about developments immediately outside their borders. Impact on views from, and towards, Conservation Areas and significant green spaces should therefore also be a consideration.

We accept the Mayor’s ten-year target for net housing completions of 3,134 p.a. for Barnet.

We have severe reservations about Section D.2.d’s presumption in favour… within PTALs 3-6 or within 800m of a Tube station, rail station or town centre boundary [of] infill development within the curtilage of a house.

We have seen numerous applications for such infill in our area, but rarely to the satisfaction of either neighbours or planning committee.

We support the Mayor’s belief that public sector land can play a significant role in meeting affordable housing need, and would like to see such developments giving priority to key public service workers. But the definition of ‘affordability’ in the Glossary is insufficiently robust.

In suburbs like Barnet there are many elderly people living in family-sized accommodation, and we would like to see incentives to encourage them to downsize or let spare bedrooms to students or low-earners – without, of course, any pressure, threats or harassment.

We particularly welcome this chapter with its recognition of the vital importance of maintenance and value measurement.

We agree that the enhancement of the Green Belt to provide appropriate multifunctional uses for Londoners should be supported – but more detailed guidance is needed as to what is ‘appropriate’. We do not believe that this includes multi-use games areas with high security fencing, floodlighting and artificial surfacing, for example.

While we support restraint of vehicle use, it must be recognised that in Outer London boroughs such as ours residents are inevitably more dependent on cars. Increases in housing and population will inevitably result in increases in motor traffic in Barnet and throughout London, with the propensity for longer delays and increased pollution.

A concerted effort will be necessary to keep both private and public transport moving efficiently. This should include road building, more effective traffic flow systems and high-tech innovations such as smart traffic lights.

We agree that there an urgent need to improve public transport capacity, connectivity and quality of service to ensure that it continues to cater for London’s growth. Our town centre tube and bus services are not well integrated, and east-west connections are often poor for both public and private transport.

In principle transport hubs are logical places for intensified use, and there may be scope at our tube and rail stations for building above car parks, tracks and the stations themselves. However there are considerable planning and technical challenges associated with all our existing hubs.

High Barnet Station, for example, abuts the unstable 19th century embankment carrying the A1000 on Barnet Hill, and is surrounded by trees and the open hillside that was the historic site of Barnet Fair.

Its natural surroundings makes it one of Chipping Barnet’s attractive ‘green gateways’ that would be lost if medium or high-rise development were permitted around or above the station.

The Mayor should encourage more orbital links – including tram, light rail and affordable very rapid transit (AVRT) – across or beneath the Green Belt where necessary – to link new destinations on either side of the borough. We welcome the positive findings of the recent feasibility study of a potential West London Orbital Railway, and would like the study extended to include Brent Cross, Mill Hill East, Finchley Central, Finsbury Park and a possible link with the Gospel Oak-Barking line.

These and other imaginative transport and infrastructure improvements will be essential if the Mayor’s vision of intensified suburbs in Chipping Barnet are to receive residents’ support.