Saving Whalebones for community use 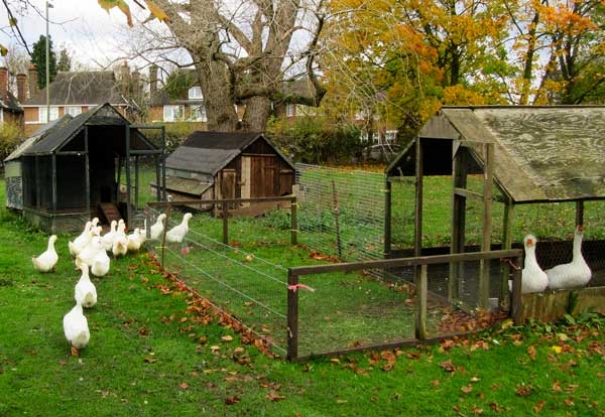 Whalebones Farm ducks November 2017
Creating a city farm with access for volunteers and local children is one of the ideas being canvassed by Theresa Villiers, the Chipping Barnet MP, as part of her efforts to save the Whalebones open space.

Local residents are being invited to join a campaign to prevent the loss to housing redevelopment of the woods and fields between Barnet Hospital and Wood Street.

A smallholding with geese, ducks and chicken is a much-loved feature of the Whalebones park and its future is in doubt following a decision by the estate’s trustees to ask the house builders, Hill of Waltham Abbey, to prepare a planning application.

Hill have promised to come up with plans for the “sensitive redevelopment” of the 11 acres of farmland that are under the trustees’ control.

Whalebones house, which is privately owned is not included in any possible redevelopment, and Culainn Shanahan, son of the owners, is supporting Ms Villiers’ initiative and has also been canvassing support for a possible city farm.

Local residents were canvassed by the MP last year for their opinions on the future of Whalebones and she said the opposition to redeveloping the site with housing was overwhelming.

“Unfortunately, there is very little protection for the Whalebones fields. They are not designated green belt and that means plans to build on the site may be very difficult to defeat.

“Gwyneth Cowing, the local artist who left the estate in trust in her will, expressed her wish to the executors that the land should remain in agricultural use for as long as it was practicable.

“Once these green fields are gone they are gone for good. There are some possible ways the site can be protected, but if we want to stop the bulldozers we need to act now.”

When she hosts the public meeting, Ms Villiers will urge residents with expertise or experience in heritage and conservation matters to join “a once in a lifetime chance to save Whalebones.”