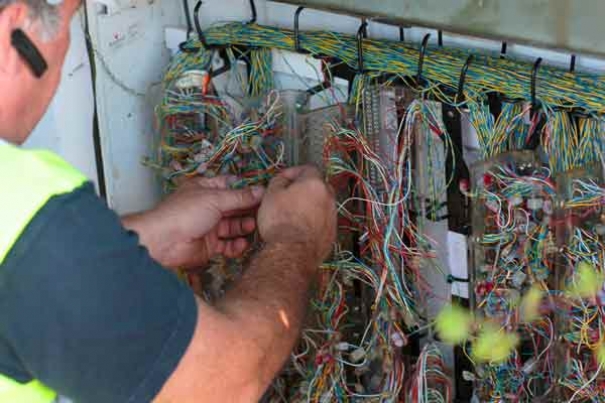 BT engineer installing new Broadband cabinet
High Barnet residents without access to a fast broadband connection are canvassing their neighbours in the hope of demonstrating to British Telecom that there is strong local demand that would more than justify investment in the nine additional fibre-enabled cabinets that are needed.

So far BT’s roll-out of broadband has reached only 77 per cent of properties in High Barnet.

As a result well over 3,000 households are without a high-speed service, and they will have to wait at least another three months before being told whether there is any likelihood of them being offered a faster broadband speed.

As part of the continuing campaign to highlight the difficulties faced by householders who are without a fast connection, eight local residents met a BT executive at the constituency office of the Chipping Barnet MP, Mrs Theresa Villiers (13.3.2015).

Afterwards they agreed that their only option was to start canvassing neighbours to collect signatures in a concerted attempt to exert greater pressure on the company.

Lists of potential customers can then be sent to Mrs Villiers for forwarding to BT to prove that an upgrade would be commercially viable.

At the meeting BT’s representative Andrew Campling insisted that fast broadband coverage across the London Borough of Barnet had reached 91 per cent, only for Mrs Villiers to remind him that this fell to 77 per cent in High Barnet.

He said that new fibre-enabled cabinets can cost up to £25,000 to install, but this fell to £10,000-15,000 in urban areas. BT needed to show a return on investment within 15 years, and that meant a minimum of 300 customers would have to sign up for a fast broadband service to justify the investment.

BT is to carry out a review during the next three months to consider which cabinets might benefit from the £50 million allocated for the next stage of the broadband programme.

Last year as part of BT’s ongoing roll-out programme, one extra cabinet was installed at the bus stop beside Hadley Highstone but no firm promises were made by Mr Campling for this year’s review.

Because BT’s customers in streets in and around roads such as High Street, Wood Street, Stapylton Road, Queen’s Road and Bell’s Hill have become so frustrated by the company’s evasive answers, the organisers of street-by-street canvassing hope they can demonstrate that there is a strong commercial case for investing in new cabinets.