Barnet’s link to the The Crown 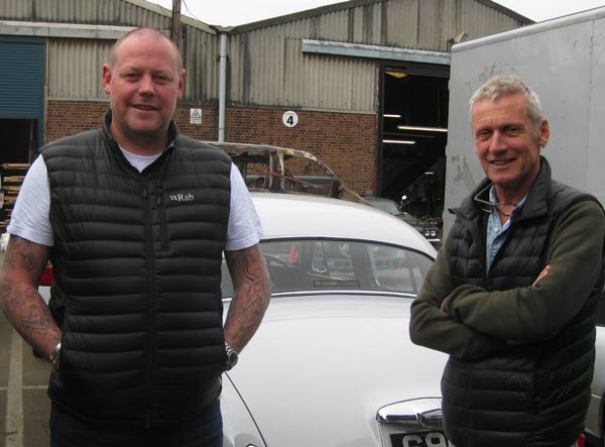 Ben Dillon (left) and Mark Raggett, art director for The Crown series being produced at Elstree Film Studios, standing beside a Jaguar Mark 1 featured during a scene when the Queen visits the Jaguar car factory
Providing period cars featured in the hit television series, The Crown – being filmed at Elstree Film Studios, Borehamwood – is just one of the many commissions for a Barnet supplier of vehicles for film and television productions.

Ben Dillon, who lives in Wentworth Road, has been in the business for the last 20 years and runs MGM Cars which was established by his father to source vehicles use in action-packed scenes.

In the back lot at Elstree, where MGM has its workshop, there is an eye-catching array of vehicles, ranging from the £50,000 grey Jaguar featured in The Crown to the specifically built prison vans for upcoming Hollywood movie “The Hitmans Bodyguard” starring Samuel Jackson and Ryan Reynolds.

Mr Dillon’s business buys, hires and even builds the period vehicles that are seen on screen, and since his father, Thomas Dillon, established MGM Cars at Elstree Studios, he estimates they must have provided vehicle props for over 1,000 productions. 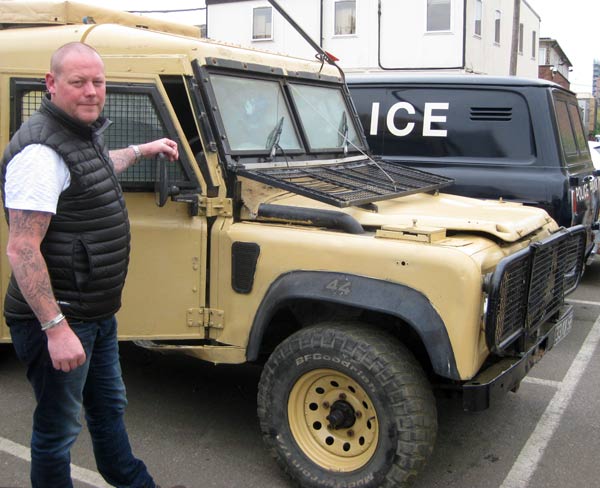 Ben Dillon beside one of three “snatch” vehicles supplied for filming the Cormoran Strike. In the background is a Ford Transit Mark 1 Police van that featured in the latest Morse drama, Endeavour“Period cars, just as costumes, can help tell the story. If they are correct to the time you can dress a modern street and easily go back to the early or mid-1990s.

But if you are using cars like Jaguars they must be spot on, and the same goes for action scenes requiring ‘snatch’ vehicles like the Army Land Rovers used in Iraq and Afghanistan.”

Businesses at Elstree Studios have been transformed in the two years they have been filming the biographical drama series, The Crown, for Netflix.

In the Elstree back lot, next door to Borehamwood’s Tesco supermarket, are the mock-ups of the gates of Buckingham Palace, Downing Street and Admiralty Arch.

Beside the lot is the George Lucas Stage which houses the Buckingham Palace interiors.

Wrotham Park, just north of Hadley Common, is one of the many locations used for exterior, and other interior shots.

Mr Dillon says Netflix’s decision invest £200 million in filming The Crown and basing production at Elstree, has meant he is busier than ever. “The production company, Left Bank Pictures, have just finished filming series two and we hope series three of The Crown will start filming next year.” 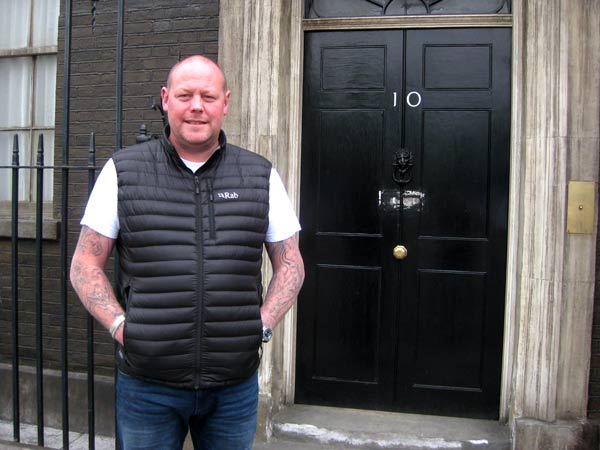 Ben Dillon at the door of 10, Downing Street – just one of the sets on the back lot at Elstree Film StudiosMGM Motors hired and supplied the grey Jaguar Mark 1 that was used for the recreation of the Queen’s visit to the Jaguar car factory.

Mark Raggett, supervising art director for The Crown, says it is vital to find the right car for the scene.

“Ben’s company has found the vehicles we have needed for the last two seasons and they have been spot on.

We have to have top-end cars, and they must entirely accurate for the period being filmed.”

Next to it in the parking lot is another equally valuable car, the black Mark 1 Jaguar used in the Morse-drama Endeavour.

Another special car supplied by MGM is a 1929 Oldsmobile driven by the Greek character Spiros in the drama series The Durrells staged in Corfu. Filming series three is now underway.

Mr Dillon said the British film industry was booming because of productions here that were being financed by American companies. “Ever since David Cameron brought in tax breaks of anything from 30 to 40 per cent for UK film production, US companies have done more and more work over here.

“Who can blame Netflix for basing their £200 million production of The Crown at Elstree when the tax break is so advantageous, especially when we have such tremendous production facilities, the right kit and the widest possible range of technical expertise.”

Mr Dillon moved to Barnet from Lancashire where his father began the business providing vehicles for film and television productions. After living in Union Street, he and his partner Victoria moved to Wentworth Road. Their three children are pupils at Foulds School.