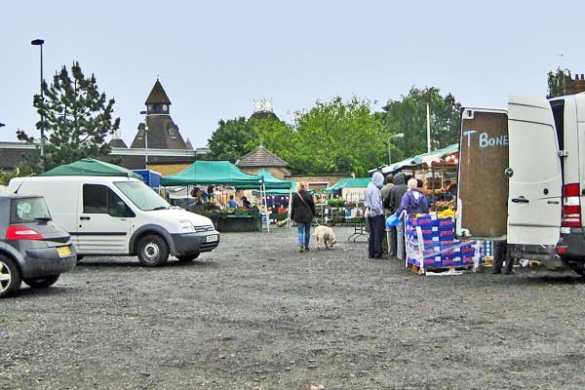 Barnet Market site to be improved
Barnet Market’s improved site should be open for business by September, ready to attract new stall holders.

Tenders are being invited for a £100,000 upgrade of Barnet Market, which the new owners say should be ready to trade in much improved surroundings by September.

Property group William Pears, which purchased the Spires shopping centre two months ago, has announced ambitious plans to revitalise the whole complex. The market would be the first to benefit from new investment.

Charlotte Dunlop, William Pears’ asset manager for the Spires, told the annual meeting of Barnet Residents Association (2.7.2013) that the group was anxious to see the market thriving once again, and if it became a success the site could be expanded in the future.

Tenders were being invited for resurfacing the site, erecting new fencing and installing toilet facilities for stall holders.  A new operator was being appointed to manage the market, and the aim would be to attract new stall holders to the Wednesday and Saturday markets as “quickly as possible”.

In an attempt to boost both the market and the shopping centre, a food festival would be staged in the Spires in the first week of September and it was hoped that the event would attract community support.

Ms Dunlop said the Pears group had planning approval to use the market site as a car park on non-market days. “Consent for the car park is only for five years and we need to get it operating in conjunction with the market to recoup the cost.

“We realise that the market is really
out on a limb at the moment.

“We realise that the market is really out on a limb at the moment. We want to get it up and running in an improved site by September and the more successful the market is, the greater the chance of expanding it in the future.”

Ms Dunlop revealed that Barnet Council had wanted an additional £75,000 spent on new surfacing for the market, but the Pears group had refused to meet the extra cost.

More in this category: « Barnet market: now it’s up to Spires’ new owners to deliver Temporary home for Barnet Market »