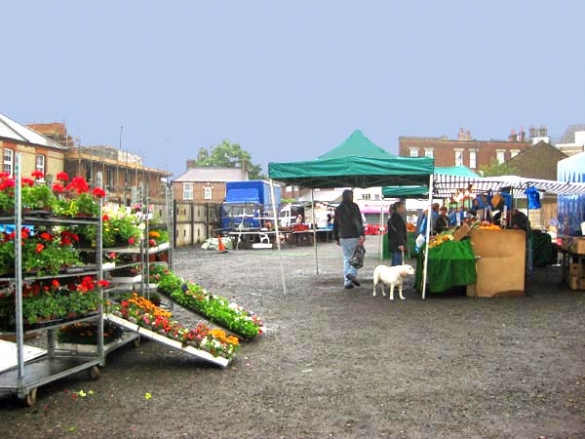 Barnet Market
Resurfacing the site of Barnet market and installing basic facilities for the stallholders is the first test of the William Pears Group, new owners of the Spires shopping centre.

Planning approval has been given for the resurfacing of the site – which will become a pay-and-display car park on non-market days – and for the provision of electricity, toilets and other facilities for stallholders.

William Pears, one of Britain’s biggest privately owned property groups, purchased the Spires complex in April and inherited both the site of the market and outstanding planning applications submitted by the previous owners, UBS.

Barnet Council’s go-ahead for the market’s redevelopment has been met with a chorus of approval from the Chipping Barnet MP, Theresa Villiers, the Friends of Barnet Market and the Barnet Society.

But in recent years there have been many setbacks in the long-running saga over the market’s redevelopment and the outgoing chair of Barnet Society, Judith Clouston, told the Society’s annual meeting (20.6.2013) that despite the apparent determination of the Pears group to revitalise the Spires complex, the campaign to save the market was not over yet.

“William Pears have committed themselves to carrying out the work but we will have to pursue them over the coming weeks and months to ensure the market upgrade does take place.”

Ms Clouston said that at last there was a real prospect of a proper asphalt surface for the site, removal of ugly wooden hoardings and their replacement by low railings, promising a real improvement in the appearance of  St Albans Road near its junction with the High Street.

In a message of support, Theresa Villiers said she was pleased to hear that years of campaigning by the Friends of Barnet Market, the Barnet Society and other groups were finally “starting to bear fruit”.

She too would keep up the pressure on William Pears because there had been so many false starts in the past when hopes for a market upgrade had been dashed; her hope was that it would not be too long before the Wednesday and Saturday markets were really thriving once again and attracting shoppers from miles around.

Plans for the future development of the whole of the Spires complex remain high on the Barnet Society’s agenda and Ms Clouston said they would require constant monitoring. Two earlier applications made by UBS, for an extension to the Waitrose supermarket and for a three-storey “anchor” store in the eastern courtyard, have been withdrawn by the Pears group.

New architects and managing agents and advisers have been appointed.  “What we want to see now is a proper master plan and a proper design for the whole site.  We do not want piecemeal applications. What we must know is what the overall vision is for the Spires and that is what we hope the new owners will deliver,” said Ms. Clouston.