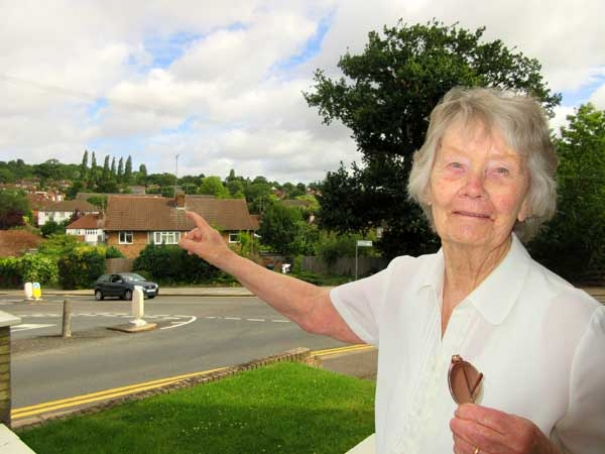 Betty Fanning at her house in Potters Road, looking across the Meadway towards King George’s Fields
Roads running between High Barnet and New Barnet merge together almost seamlessly today, but in the 1930s, when farmland still separated the two towns, the footpath up to the shops in the High Street was through fields filled with cows.

Betty Fanning, soon to be 91, has vivid memories of her childhood walking up to High Barnet in the years before the Meadway was built, and post-war houses later filled the fields running south from Hadley Common.

After an enjoyable and happy lifetime in New Barnet, Betty is keen to preserve the greenery and wooded landscape that remains to this day, and says she might even be ready to lie down in the road if any attempt is made to fell a magnificent oak tree directly opposite her home.

Since her father and his brother bought the family’s Victorian semi-detached on the brow of the hill at the junction of Meadway and Potters Road in 1925, the family has enjoyed the view from the house.

As a child she remembers looking across the fields that led up to what is now King George’s Fields, and then after the Meadway was built in 1931, seeing the houses being built alongside the new road, and then after the Second World War, on the surrounding the farmland.

“Despite the fact that all the fields have been developed for housing, we still have such a lovely view, looking up towards King George’s Fields and Hadley Common, and we see some fabulous sunsets.

“Right on top of the skyline, standing up straight, is a row of six poplars, and they always seem to be swaying in the breeze.

“The oak tree opposite, at the junction of Meadway and Potters Road, is so special to me, because when I was a child there was a lychgate there, beside St Mark’s Church, and that led to a footpath that went up through the fields and came out at the back of the High Street, just where the Salisbury Hotel used to be.

“We got used to seeing the cattle in the fields, and then in the autumn one of the farmers would bring along his pigs and they would eat acorns that had fallen from the oak trees.

“I know that some people think the oak beside St Mark’s Church isn’t in the best of health, and branches do fall off in stormy weather, but it’s been part of my life since I was a child, and I probably would lie down in front of it, if there was ever an attempt to cut it down.”

Betty’s father and brother, Charles and William Roberts, started out life singing in a barber’s shop quartet that toured music halls across Europe. After service in the First World War -- Charles served in the King’s Rifles and William was in a tank regiment – they clubbed together and took out a joint mortgage to purchase their house in Potters Road.

“I think after the First War, they wanted to live as near to the country as possible. My father trained as an optician in Wigmore Street, where his sister worked, and he married my mother, who was the receptionist.”

The couple were married at St Mark’s, beginning a long family association with the church across the road.

Betty was born in 1926. “I was christened at St Marks, and in 1948 that was where I got married, like my parents, and it was also the church where my two sons, Michael and Neil, were christened,”

“In the 1920s, when I was a child, there were seven of use in the house – my grandparents, my mother and father, my uncle Bill, and me and my brother William.”

Betty’s family moved to Hadley Road, but later she brought up her own family in Potters Road and inherited the house. Her husband, Herbert Fanning, was in the oil industry.

One of Betty’s few complaints about the Barnet of today, is that she regrets the decline of the High Street.

We used to have a wonderful High Street. You could buy anything there, even a piano if you wanted one.

“But we mustn’t grumble. We have good schools here, and very good transport. We didn’t get a bus up the Meadway until 1951, but it’s a great way now to go to the shops.

“I can hardly believe it now, but the new houses around the Meadway went for £400, and the Meadway used to be such a pretty road in the spring. There were flowering cherry trees all the way up, and pink petals everywhere. But they’ve all gone now.”

More in this category: « Barnet loses another link with past Re-living the Battles of St Albans and Barnet »