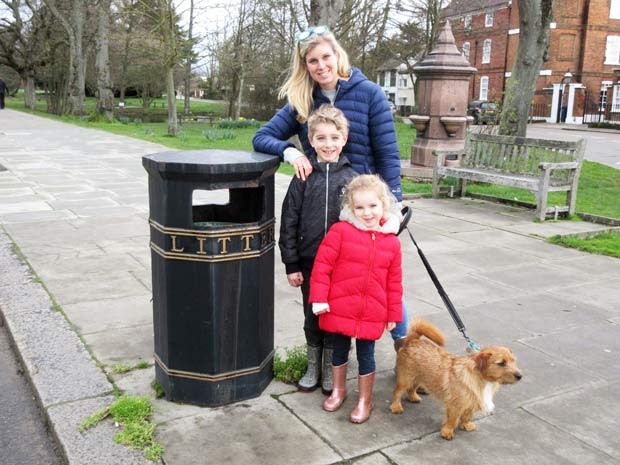 Volunteers are lining up to join the group’s first drive to collect litter, taking place on Saturday 23 March (assemble at 12noon in Church Passage outside the parish church).

Barnet Council is providing the Green Beings with 200 plastic rubbish sacks and an appeal to raise funds to purchase high-visibility vests for the children who join in is being organised via the group’s Facebook page: https://www.facebook.com/pg/greenbeingshighbarnet

Two of the target areas for the clean-up are the litter-strewn roads and grass verges around High Barnet tube station and the access roads and car parks around the perimeter of Barnet Hospital.

Ms Blomquist, a High Barnet mother of three children aged between four and nine, said she decided a couple of months ago to see if it was possible to organise local working parties to pick up litter.

She looked at the work of the Keep Britain Tidy campaign and decided to form a Green Beings community group for High Barnet.

“I was apprehensive to start with, but the support has been overwhelming, and hundreds of people are promising to help.

“Barnet Council have promised 200 plastic bags and told us to leave them in Church Passage for collection when we finish at 2pm.

“We are now trying to raise money through our crowd funding page on Facebook so that we can buy some high-visibility vests, especially for the children, so as to ensure they’re safe.”

Ms Blomquist says she will map out the areas where litter picking is most needed but areas like roads and verges around Barnet Hospital and High Barnet tube station were “crying out” for a spring clean.

If the clean-up goes well and attracts the support that has been promised, she hopes to organise another litter-picking afternoon at the end of the summer.

More in this category: « Security to be withdrawn from some parks & gardens Accommodation for nurses: old and new »