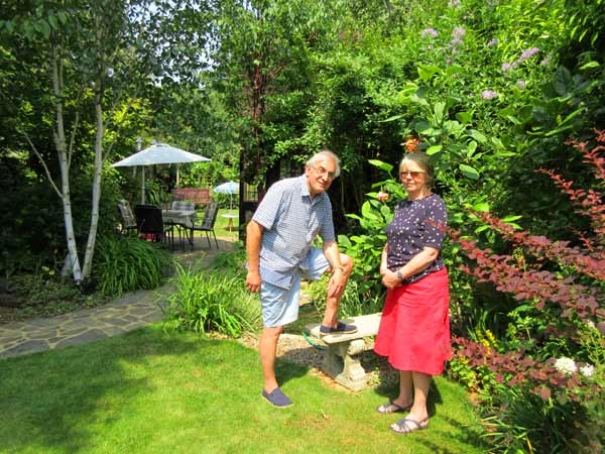 Years of hard work by Derek Epstein and Jo Vargas on show when their garden opens to the public in July
A 120ft garden at a traditional Edwardian semi-detached house in Normandy Avenue, Barnet, has secured recognition from the National Garden Scheme – a long-held ambition for the owners.

Derek Epstein and Jo Vargas will be welcoming visitors to their garden on Sunday 23 July to raise money for charity.

Six years ago, their garden was like a jungle, and over half was a solid mass of brambles, covering up the original paths and lay-out.

Now fully restored, paved paths lead from a lawn with a goldfish pond, on to a second inner garden connected by a woodland path, and finally a vegetable patch.

All around are borders filled with flowers and shrubs interspersed with a selection of Derek’s clay sculptures and Jo’s pottery.

Set within the garden are two magnificent wooden garden houses, dating from the 1920s, each with their original leaded-light windows.

Derek and Jo bought the house seven years ago. Previously it had been owned by the Rogers family, who had lived in the property since they purchased it in 1922.

The garden was in a terrible state when we moved in....

“The garden was in a terrible state when we moved in, and it has been very satisfying over the last few years creating something which we started from scratch and in which we take great pride.

“When we visited other gardens open visitors we always liked to think that one day ours might qualify. I wrote off to the National Garden Scheme, and after an inspection we were given the OK, and here we are, open to visitors.”

Derek said their excavations to reveal the original garden also exposed part of a cast iron pipe that formed part of Barnet’s first gas works. “Our house was built in 1913 and apparently the original gasometer straddled our garden.”

Among the features which Derek takes great pride is his well-stocked goldfish pond and other water features which are a great draw for the local frog population. When cleaning out the pond in April, he recovered the six goldfish, plus 73 frogs.

Derek is promising that the lawns will be immaculate for their open day and there will be up to 40 seats placed around the garden so that visitors can enjoy tea and cakes.

There are two Barnet gardens are open to visitors on Sunday 23 July under the National Garden Scheme: