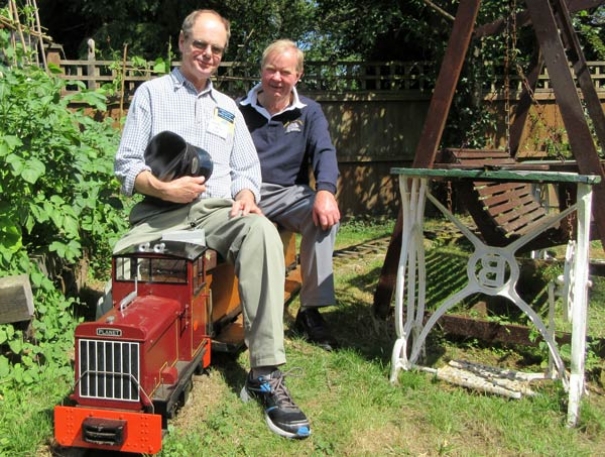 Ian Johnson (right) astride the trailer of his electric engine, on his miniature railway line at his home in Wood Street, Barnet. With him at the controls is Derek Smith, a fellow member of the North London Society of Model Engineers
Generations of Barnet children have enjoyed a trip on the miniature railway that circles the Wood Street garden of Ian Johnson, a well-known retired doctor and skilled model engineer, famed his collection of model steam engines.

Each summer he opens his garden to the public – to raise funds for the Jubilee Sailing Trust – but on safety grounds, now uses an electric engine for rides round the garden on his five-inch gauge track.

“Firing up a model steam engine needs a lot of care and attention because it obviously gets very hot, so when children are taken round the garden, the electric engine is safer.”

On display inside Mr Johnson’s house are his pride and joy: scale model railways engines that he built himself, together with his prized miniature engine, Collingwood, a scale model of an LMS Jubilee class steam engine that he purchased at a Christie’s auction for £5,500.

“I’m 81 now, and getting a little too old to move Collingwood around. She weighs two hundredweight, so perhaps she’ll gave to go. After all I do have five miniature steam engines altogether.”

Other rooms in the house hold more of his collection of miniature steam engines that he built himself: Bridget, for a seven-and-a-quarter-inch track; Polly, for a five-inch track; and Masie, for a three-and-a-half-inch track.

“They are all named after barmaids – and I like to think they keep each other company.”

Dr Johnson, chairman of the North London Society of Model Engineers, was well known as a general practitioner at the Old Court House surgery, but he only became a doctor in later life.

“I started out in the Merchant Navy, and became a ship’s mate, then I trained as a lecturer in navigation, before training to be a doctor and becoming a general practitioner at the Old Court House surgery.

“I retired from full-time work 12 years ago, but continued as a locum, so you could say quite a few Barnet residents have been my patients over the years, and their children have probably had a ride on one of my trains. In fact, I am still a qualified doctor.”

Dr Johnson’s most recent achievement has been to complete a degree in maritime history at the Greenwich Maritime Institute.

Dr Johnson began holding garden parties at his house because he like local people to come and enjoy his garden and see the miniature railway.

Only the other day at the polling station, a lady told me that she remembers her son riding on one of my trains when he was three, and he is 27 now, so you can understand the pleasure this has given me over the years.

Dr Johnson, a long-standing member of the Barnet Society, is President of Barnet Museum, which is holding its annual garden party at his house, 130 Wood Street, in August.

When he began opening the garden at his home 30 years ago he raised money for the NSPCC, but his most recent garden party (2.7.2017) was again in aid of the Jubilee Sailing Trust, which enables disabled folk to sail on tall ships.