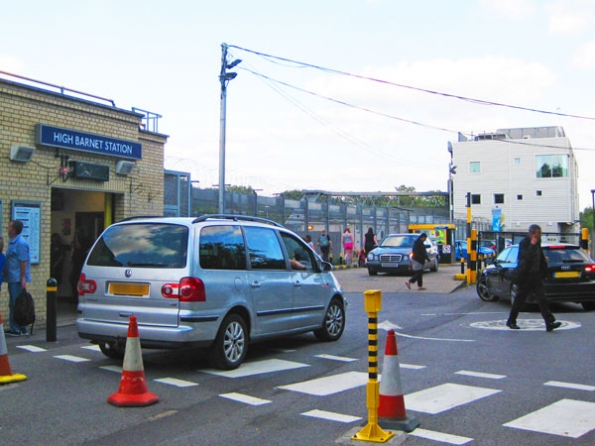 Congested chaos at High Barnet Tube
Reorganise chaotic approach to High Barnet tube station to provide space for a bus service direct to the Spires and Barnet Hospital – plea by the Barnet Society. Transport for London is being urged by the Barnet Society to carry out a full investigation into the possibility of running a bus service from High Barnet tube station to the Spires shopping centre and then on to Barnet General Hospital.

This is one of several society suggestions to ensure that Chipping Barnet retains – and if possible improves – its bus links, in the face of competing demands for expansion elsewhere in London but no increase in TfL’s budget.

A particular concern is the withdrawal of Oyster ticketing from bus routes not all of which are within Greater London. Oyster travel cards no longer apply on two cross-boundary routes – Metroline route 84 and Uno bus 614 – to the detriment of local residents, especially those travelling between Chipping Barnet and New Barnet station.

In its submission to the Transport Committee of the Greater London Authority, the society lists the improvements TfL could make, and suggests the provision of a service by a minibus or Hoppa from the lower entrance of the tube station direct to the town centre might be one that would have the greatest impact.

At present the problem of trying to catch a bus from the recently opened lower entrance to the tube station presents “a unique combination of difficulties”.

At present the problem of trying to catch a bus from the recently opened lower entrance to the tube station presents “a unique combination of difficulties”.

There is no rank for taxis, and passengers have no alternative but to negotiate their way through an often chaotic station yard, which can be packed with parked or turning cars, walk up the station approach, cross the main road and then walk up Barnet Hill to the regular bus stop.

Many elderly and disabled passengers find the tortuous and rather dangerous   task of trying to catch a bus so daunting, especially in bad weather, that they use neighbouring stations such as New Barnet, Oakwood, Arnos Grove or even East Finchley rather than travel all the way on the Northern Line to High Barnet.

In previous years TfL and its predecessor London Transport have ruled out a bus service from the tube station because of the cost of altering the station yard and improving the road junction where the station approach meets Barnet Hill.

But in its submission the society argues that there is now every justification for a thorough re-examination of the case for a direct bus service.  The recently opened lower entrance has become increasingly popular with tube passengers; it is disabled-friendly and allows wheelchair users full access to all three platforms; it is also the one entrance that is manned in the evenings and at weekends.

The station yard could easily be reconfigured to provide space for a bus stop and a clearly marked area for setting down and picking up passengers. The car park is now pay and display and the ramps and fencing – needed when barriers were used to control entrance and exit – are no longer required. If they were removed and the area resurfaced, the traffic flow outside the tube station could be vastly improved and that would help not only disabled passengers and wheelchair users but also parents with prams and push-chairs.

Linking High Barnet tube station directly to the town centre and then the hospital would go with the flow of recent and proposed developments. Another bus service direct to the Spires would be a further encouragement to the property developer, the William Pears group, which has promised improvements to both the shopping centre and Barnet Market, which could include improving the confusing location of bus stops around the Spires and market. Barnet General Hospital, which has been expanded as part of the re-organisation affecting nearby hospitals, is also attracting patients and visitors from further afield.

Robin Bishop, chair of the society’s planning and environment committee says that "one of the strengths of the submission is that it suggests ways in which other local bus services could be made more efficient, thus meeting TfL’s argument that it cannot afford additions to the bus network."

The Barnet Society hopes its submission will give the GLA’s Transport Committee an outer London perspective when considering the future of London’s bus services. The main points are: