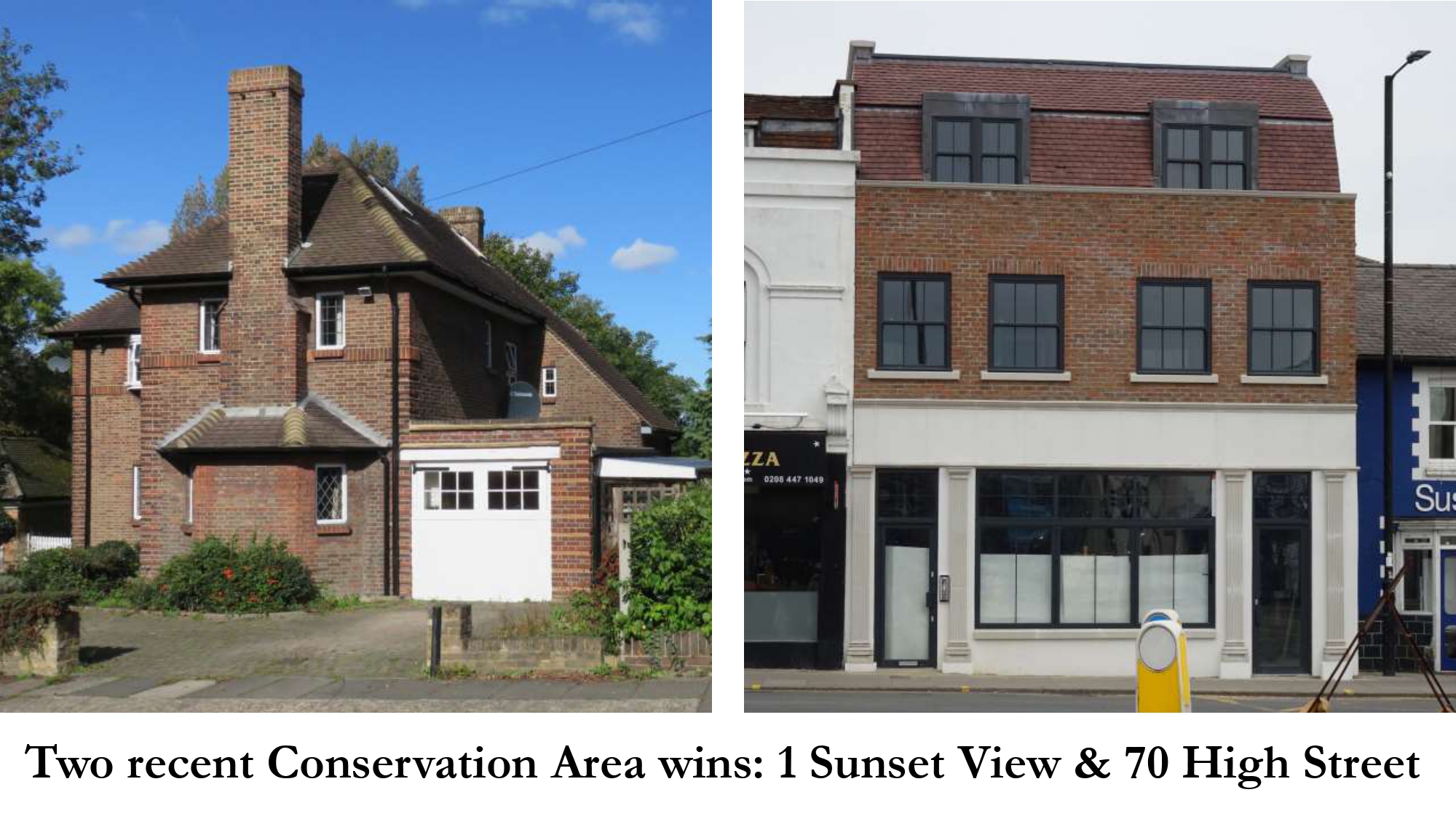 Eighteen months ago, the Barnet Society wrote that flouting of planning laws at 1 Sunset View and 70 High Street would be tests of Barnet Council’s will to enforce its planning decisions. Both owners appealed against Enforcement Orders, and both have lost. The decisions are significant victories over the degradation of Barnet’s Conservation Areas. 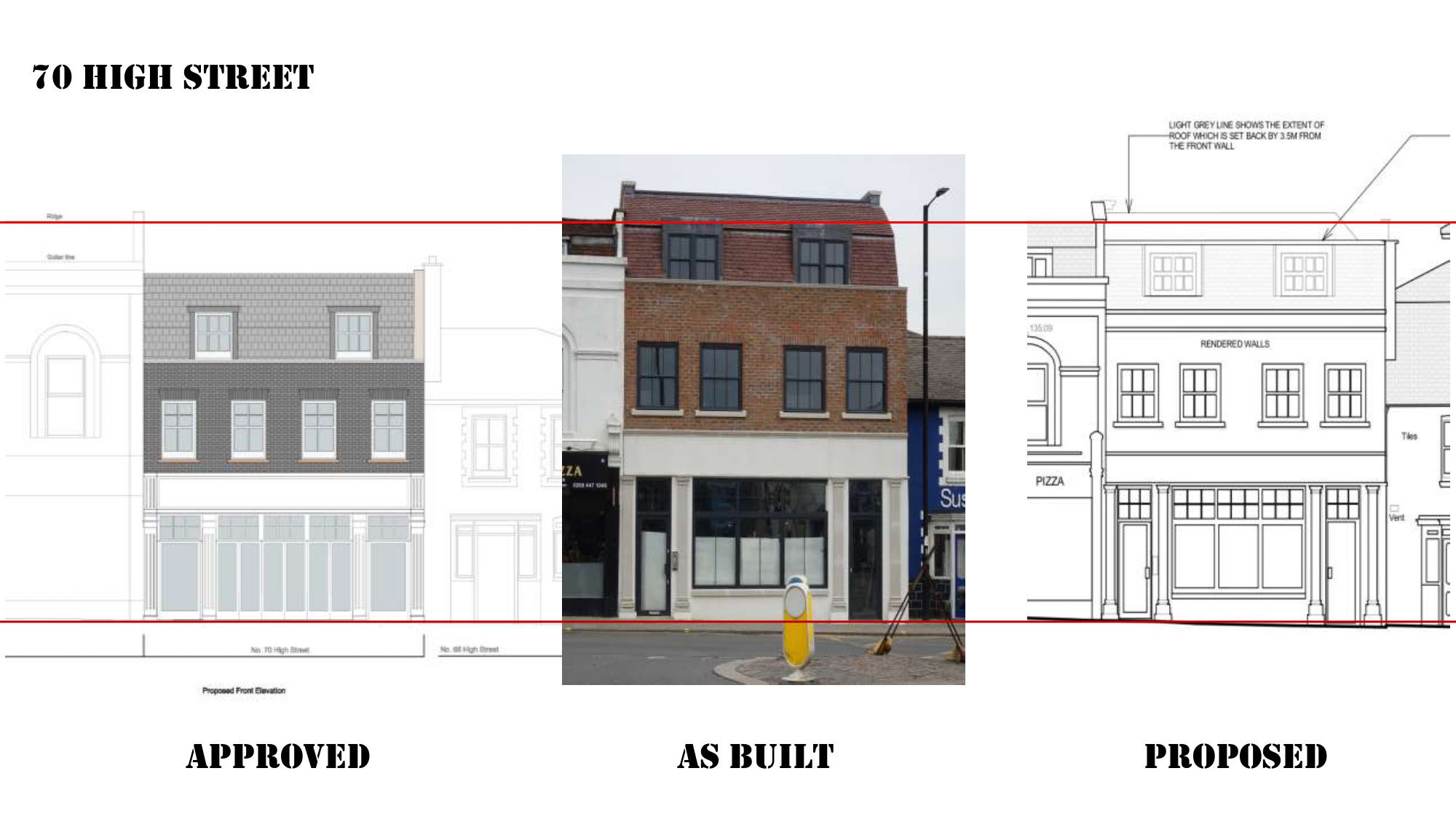 The saga of 70 High Street, which is within the Wood Street Conservation Area, was described in our web post last October. A Planning Inspector ordered the building, which exceeded its approved height by about 1.5m, to be demolished and the previous building to be reinstated.

A new planning application (no. 22/0835/FUL) has recently been submitted. Despite the inspector's stipulation that the building be rebuilt as it was before, the new owners propose just to reduce the roof height but retain most of what has been built. The resulting facade is a poor effort which still clashes with its neighbours. We will be submitting comments shortly. 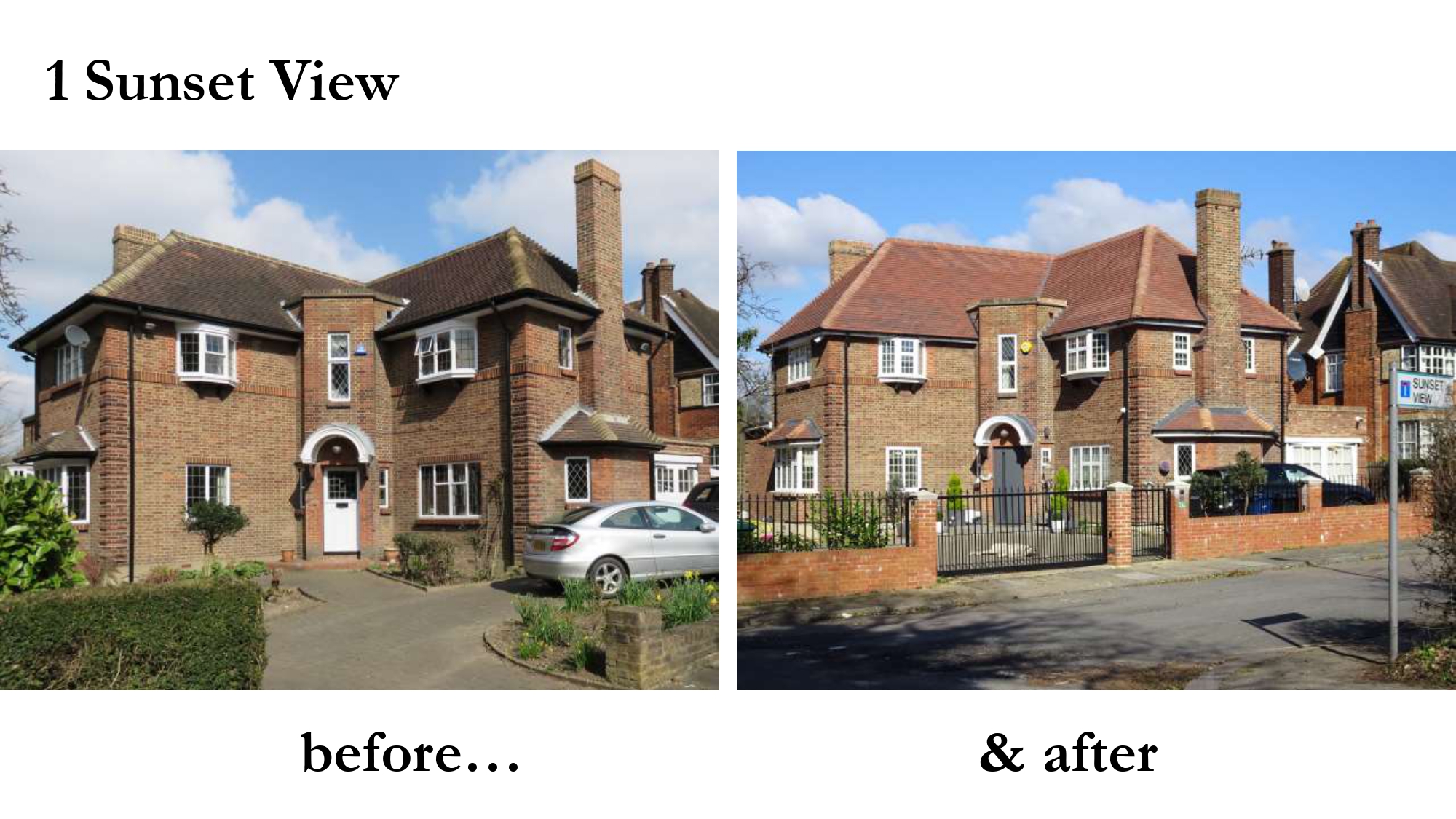 No.1 Sunset View was one of the best and most prominent houses in a road that is a North Barnet classic of garden suburb design, master-planned and largely designed by local architect William Charles Waymouth in the early 20th century. The houses are attractive variations on Arts and Crafts themes, and together comprise an unusually complete and high-quality development for its period. It’s an important part of the Monken Hadley Conservation Area.

The Society got involved almost five years ago, when a planning application was submitted to make drastic alterations and additions to the house. It was strongly opposed by local residents and the Society, and was withdrawn. We nominated the house for addition to the Council’s Local Heritage List, and in July 2019 it was formally Listed. The Council’s citation draws attention to the “considerable variety of well-crafted brickwork, door and window details…unified by consistency of materials” and mentions its attached garage, something of a novelty in the early days of mass motoring.

In spring 2019 work started on site, but we became concerned when the original brown roof tiles were stripped off, smashed and replaced with red. When unauthorised rooflights appeared, the planners served a Breach of Condition Notice. You’d think that might have been a warning to the owner, but apparently not.

Over following months, the rear balcony was demolished and chimneys rebuilt, but not exactly as before. Original Crittall windows were replaced with clunky uPVC. New side windows appeared. The traditional front door was replaced with a modern one. The integral garage was rebuilt – taller than before, and with a new window behind fake garage doors. The freestanding garage in the same style as the house was demolished and replaced with a wider, more modern garage with an up-an-over metal door. The low brick front garden wall was replaced with high railings. The front garden was covered with concrete paving blocks. The attractive Arts & Crafts interior was gutted.

None of these changes were in materials or style faithful to the original, and none was made with planning consent – a requirement in Conservation Areas. Cumulatively, they seriously eroded the house’s original quality. The Council issued several Enforcement Notices, and in November 2020 the owner appealed against them.

Finally, after a 15-month wait, a Planning Inspector has upheld all but one of the Council’s Notices. The bricks used in the extensions can stay, but all the other features must be removed and replaced to match the originals. The owner has six months to do the work.

“It is great news that the Planning Inspectorate has ruled in favour of Barnet Council’s Enforcement Notices and many of No 1’s architectural features that were removed will have to be restored. Hopefully this will also send a clear message to anyone else seeking to make inappropriate alterations to buildings in a conservation area that they won’t get away with it. We are very grateful to the Barnet Society for all the support given to us over the past five years.”

Both 70 High Street & 1 Sunset View have been important victories in the cause of protecting the Conservation Areas. They have demonstrated that the planning system can be brought to bear against demolition (or partial demolition) of heritage assets without consent and building something which flies in the face of what has been given consent. Both cases have been a huge waste of time (and money) because we shouldn't have to defend what is so clearly expressed in the law and the planning system. We hope the outcomes will serve to increase awareness of this, and show developers that Barnet is not a pushover. 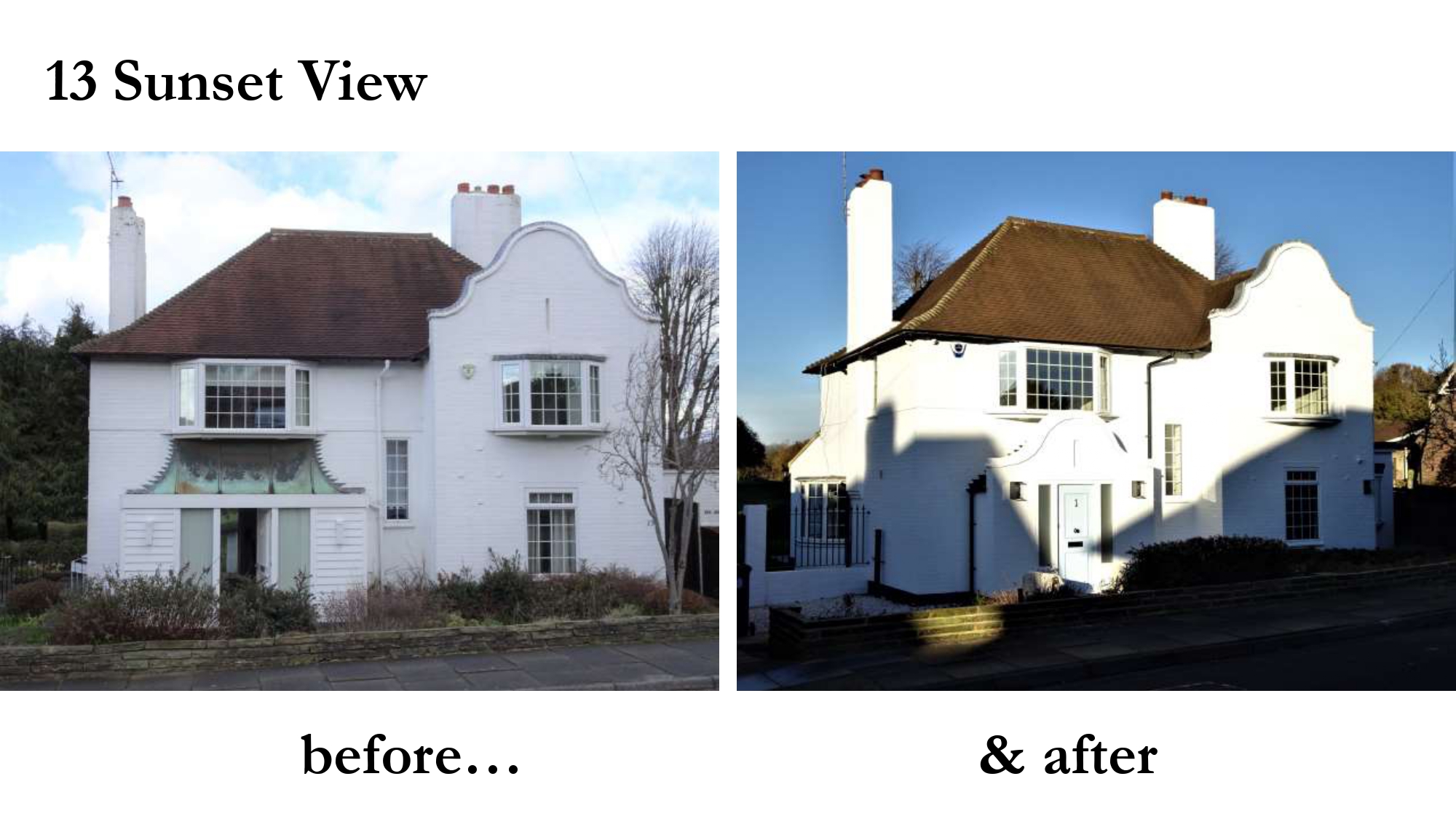 A better approach to building in a Conservation has recently been illustrated at the other end of Sunset View. Last year, the owner of another of the street’s charming houses wanted to replace its porch and make some other modifications, and consulted the Society on their design. We made some constructive suggestions – and lo! Some changes in keeping with both house and street.