Goodbye to our Green Belt? 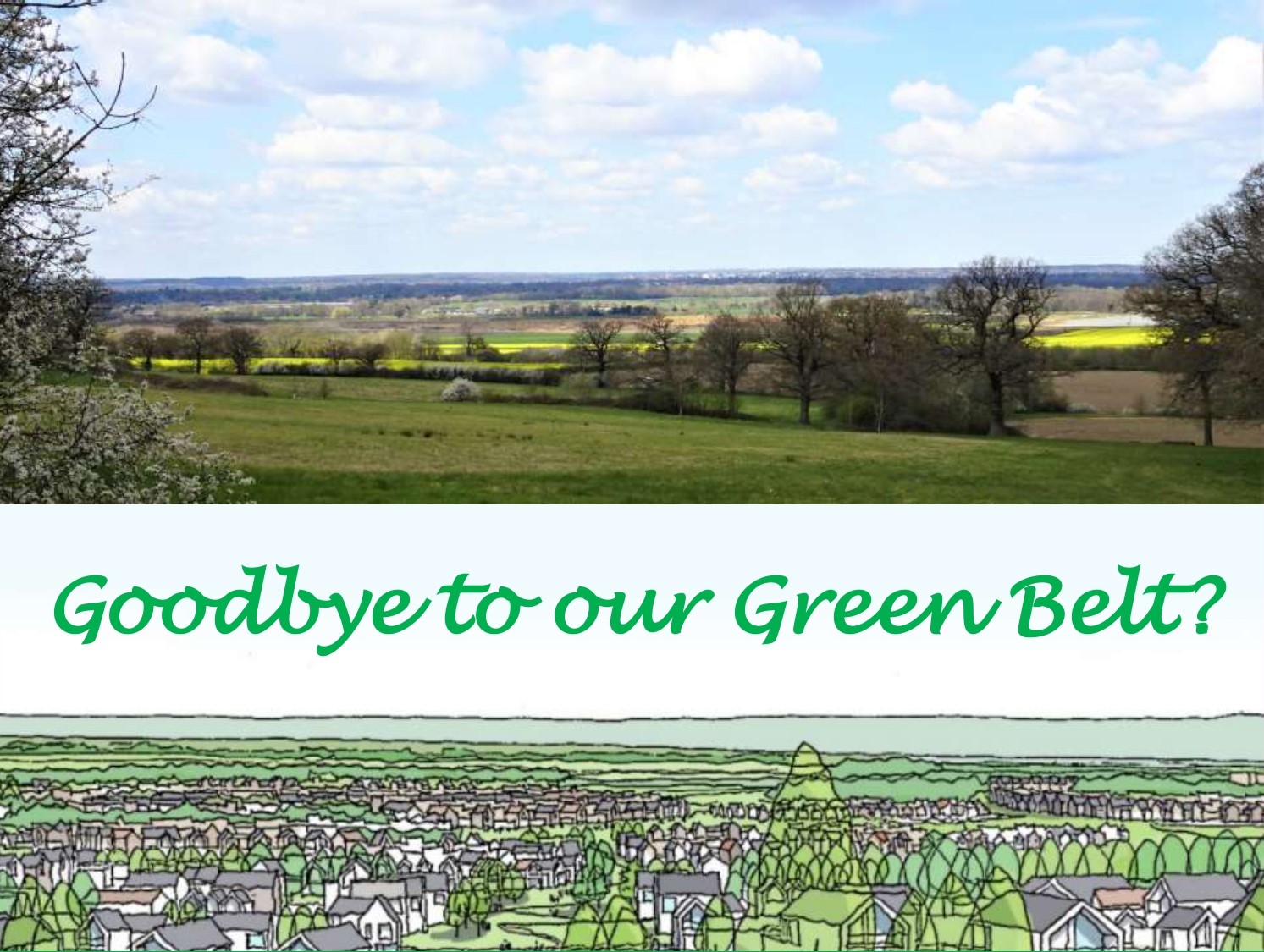 Above is the Green Belt between Barnet and St Albans. It’s the site of Bowmans Cross, a new settlement planned by Hertsmere Council. It will eventually have 6,000 homes for around 15,000 people – nearly as many as live in High Barnet ward. It will be a net-zero carbon, self-sustaining community, and the sketch above shows lots of trees. But if Hertsmere’s draft Local Plan is accepted, over 10% of Hertsmere’s (and also effectively Barnet’s) Green Belt will be lost forever.

Bowmans Cross is a showpiece of the Plan, which is currently out for public consultation. Another is a 63-hectare Media Quarter east of Borehamwood, which it is hoped will provide thousands of jobs. Other proposals include 2,770 houses in and around Borehamwood, 900 on the fields south of Potters Bar and 225 at South Mimms village (to list only those close to Barnet).

Good news for Barnet is that no new building is planned for the countryside south of the M25 and east of the A1. The media work opportunities will be welcome, to Barnet as much as to Hertsmere residents. But the Plan is vague about crucial details, and there’s much to cause concern:

We sympathise with Hertsmere’s predicament. It has to meet an ambitious government housing target, yet 79% of its area is designated as Metropolitan Green Belt, where development is only justifiable under very exceptional circumstances. But how hard has Hertsmere’s looked at its housing need and re-use of its brownfield land?

Its housing target is for a minimum of 760 new homes a year, or at least 12,160 homes by 2038. That’s based on the South West Herts Local Housing Needs Assessment, which appears not to have been challenged. Those who’ve been following the U-turns in the government’s proposed planning reforms will wonder how robust such figures are. The results of the 2021 Census are urgently needed to substantiate predictions of continuing population growth in the South-East, post-Brexit and post-Covid.

There’s also the question of whether Hertsmere’s houses will meet its own needs. It’s not explained how existing local residents will be prioritised. New homes near Barnet are almost certain to be cheaper and more spacious, internally and externally, than in Barnet itself. They’re bound to attract young couples and families struggling to afford property in our area. It would be ironic if much of Hertsmere’s new housing ended up benefitting Londoners at the expense of its own residents.

A further doubt surrounds affordability. The Plan says that 35% of new homes will be affordable, but CPRE research shows that only a tenth of homes built in the Green Belt are affordable, and these are rarely for social rent.

The Plan says, “The strategic green belt will be protected…and improvements made to the countryside and biodiversity to offset the impact of development.” That glosses over the fact that at least 10% of Hertsmere’s present Green Belt will be sacrificed to the developments listed above. Across the borough, the total will be greater, but the Plan is silent about the figure.

It‘s unclear how rigorously Hertsmere has investigated the alternative of re-using brownfield land. Table 3 in the Plan claims that 6,020 new homes – nearly half of its 15-year total requirement – would be on urban sites. According to its Table 2, 2,765 of such sites are available excluding smaller villages/hamlets, which seems scarcely credible. If true, it’s good news, but no brownfield register is mentioned to substantiate it.

If that brownfield land were to be redeveloped at densities equivalent to, say, the award-winning Newhall in Harlow – i.e. no more than four stories high, at 22 dwellings per hectare – even more of Hertsmere’s housing need could be met without resorting to Green Belt land. Alternatively, doubling the density currently proposed for Bowmans Cross (under 10 dwellings per hectare) would have a similar beneficial effect.

For Barnet residents, 900 homes on Green Belt separating Potters Bar from the M25 will be saddening. Not only do the present fields provide an attractive working agricultural landscape between Potters Bar and Barnet, they link visually with Bentley Heath, Dancers Hill, Wrotham Park, Dyrham Park and other greenery to create a panorama that’s much greater than the sum of its parts. The Baker Street and Barnet Road motorway bridges will make dismal southern gateways to the new housing, and it’s hard to imagine a pleasant life in the shadow of the M25. 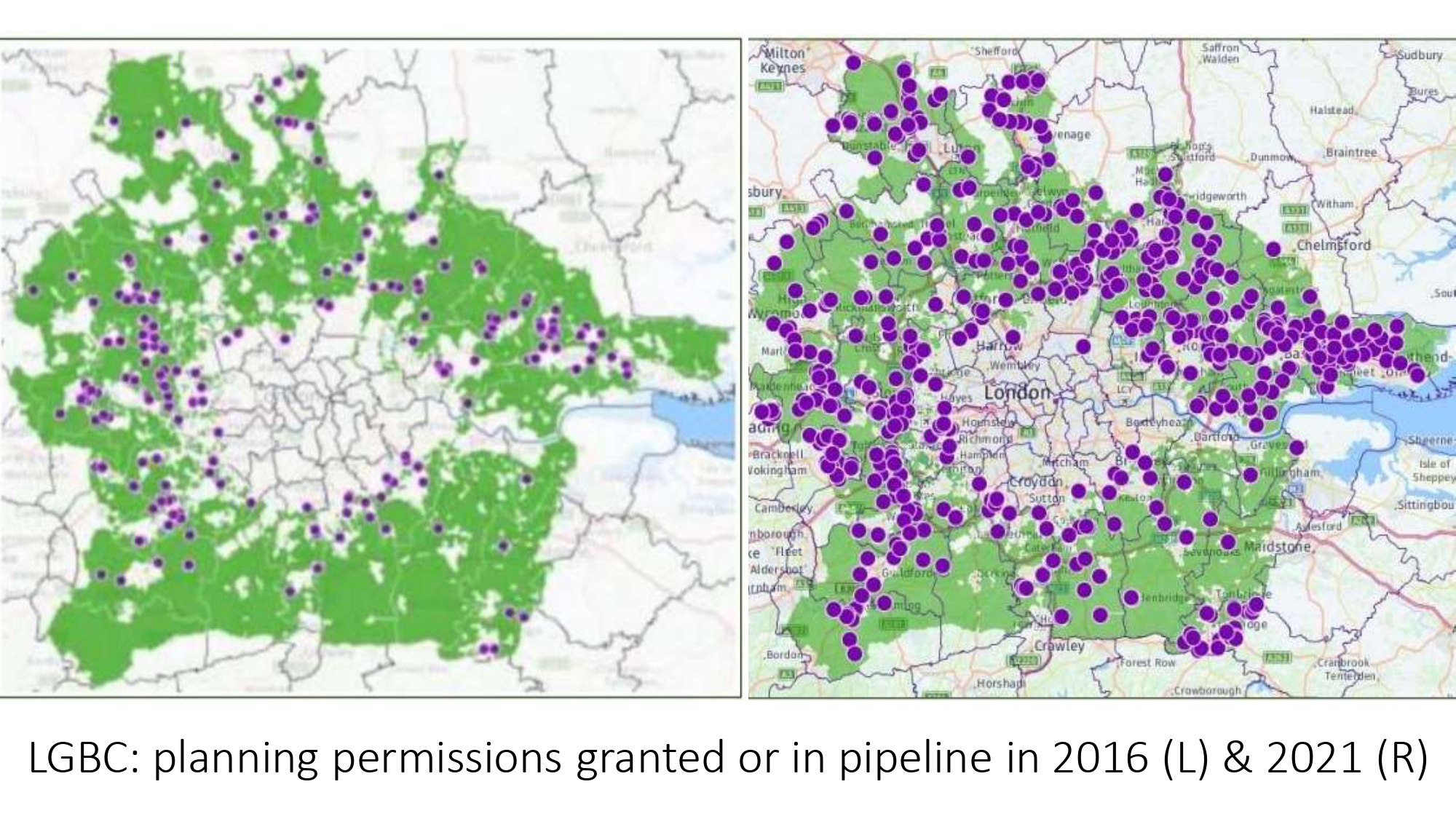 For Hertsmere residents – and for Hertsmere Council – all this should be even more worrying. The London Green Belt Council’s report earlier this year ‘Safe Under Us’? revealed that 233,276 homes have already been given, or are seeking, planning permission in the Metropolitan Green Belt. Such has been local concern that several councils have been voted out of office or lost overall control, and the government has lost its parliamentary seat at Chesham & Amersham.

Another weakness of the planning process is illustrated by a potentially serious conflict with Enfield Council’s draft Local Plan. Hertsmere is designating land south-east of Junction 24 for wildlife. But Enfield’s Strategic Policy SP E1 allocates 11 hectares close by for industrial use. Furthermore, Enfield casually mentions that it would “seek to deliver the redevelopment of the wider site (in LB Hertsmere) to provide a coordinated employment offer”. This would detrimentally impact not only wildlife but also existing and proposed residents of Potters Bar. 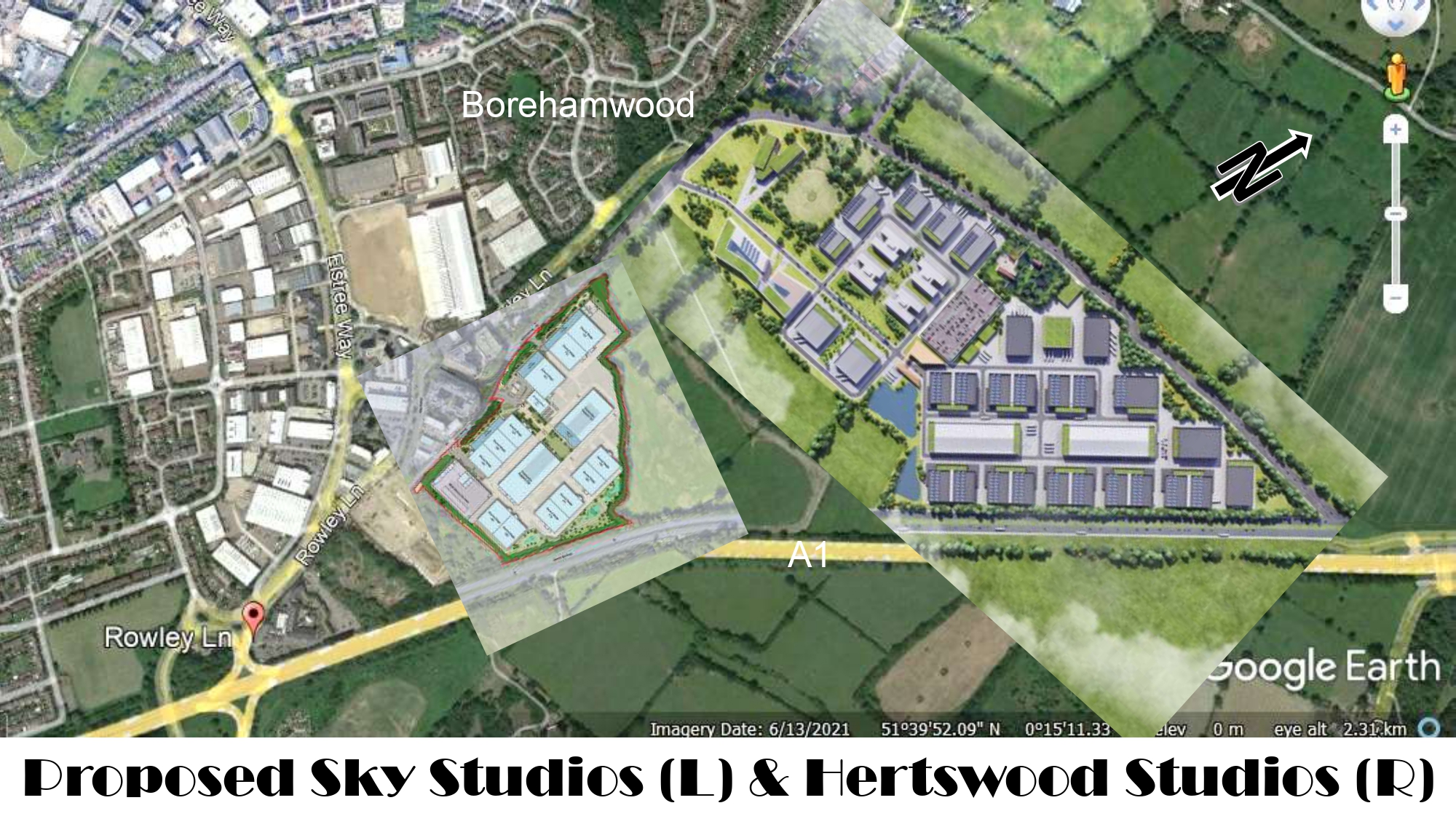 The Media Quarter needs critical scrutiny. It will be vast – 63 hectares – and will have 34 sound stages, many times more than currently exist in Elstree & Borehamwood. The future for TV and film may look bright today, but for how long will digital industries continue to rely on centralised production? Unless the Mass Rapid Transport system tantalisingly mentioned in the Plan comes to pass, moreover, access will depend largely on two motorways, one of them notorious for traffic jams.

Transport is a major weakness of this and most of the Plan’s proposed developments. CPRE research shows that people living in Green Belt developments are tied to owning and using cars, as well as being stuck with the cost of commuting, creating further financial stress for families on low incomes. Hertsmere already suffers from poor public transport to and from its outlying estates and villages, but travel occupies only 10 out of 245 pages in its Plan.

A couple of final points from a neighbourly perspective. Firstly, Barnet already suffers from road and parking congestion caused at least partly by the rising number of commuters from Hertfordshire into London. Building new homes and workplaces near our border seems certain to exacerbate that.

Second and lastly, our Society was founded in 1945 specifically to protect the countryside around Chipping Barnet. In 1947-8, our then Treasurer E.H.Lucas researched and wrote Rambles Round Barnet & Rambles in South Hertfordshire, both of which were published by the Barnet Society. The majority of the walks follow public footpaths in Hertsmere, and have benefitted from its careful stewardship. Several generations of Barnet residents have learned to love countryside that is now planned for development. The footpaths may be safeguarded, but without their green environment they will offer a tragically diminished experience. 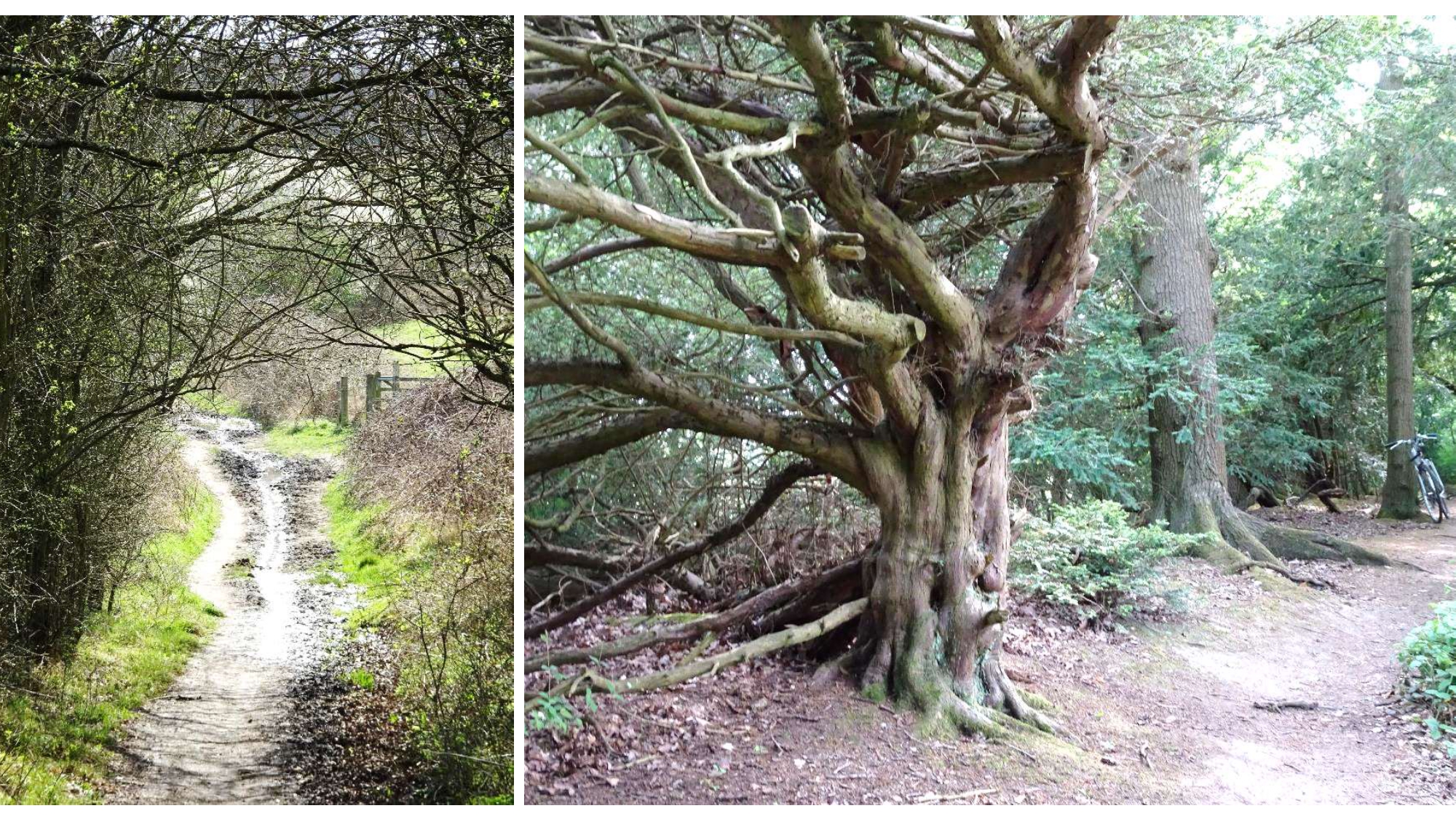 If residents of either Hertsmere or Barnet object to the draft Plan, it’s vital for them to do so by 6 December; after then, no changes of substance will be possible.

Hertsmere’s draft Local Plan can be found at:

The deadline for public comments on it is 5pm on Monday 6 December.

The Barnet Society will be submitting a response, but you can also do so yourself as follows by: