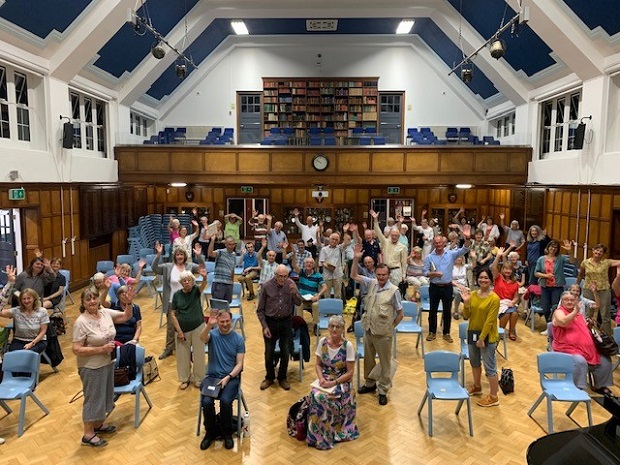 After missing out on singing together and being forced for so long to rehearse via Zoom, the Barnet Choral Society are preparing for a stylish comeback presenting a performance of Verdi Requiem at their first concert for two years.

Online rehearsals have finally been abandoned, and members resumed singing together in September – as seen above – and they have been busy preparing for their comeback concert to be held on Saturday 13 November at East Barnet School.

One of the society’s lockdown casualties in 2020 was their much anticipated 80th anniversary concert which has now been rescheduled for the spring of next year and promises to be another memorable event.

A performance of Elgar’s Dream of Gerontius is being planned for Saturday 9 April 2022 and the society will be singing alongside the Bishop’s Stortford Choral Society at Saffron Hall, Saffron Walden.

Supporting the choir for their Verdi Requiem concert in mid-November – under musical director and conductor Richard Brain – will be Philippa Boyle, soprano, Beth Moxon, mezz-soprano, Andrew Henley, tenor, and Rene Bloice-Sanders, bass, with the Amadeus Orchestra. (Full details below)

The society’s chair, Meg Kirk, said they were hoping that as many as 85 to 90 members would be able to take part in the concert and they were all so looking forward to giving a live performance at what will be their first event since December 2019.

“Our spring 2020 concert was due to have been held on March 19, but we had to cancel at the last minute because of the Covid.19 pandemic and then rush round collecting the scores and telling the soloists, so it will be wonderful to stage a concert once again.”

Ms Kirk said rehearsing via Zoom had been a new and different experience.

“We each had to be in a room on our own, some of us even had to make use of the bathroom.

“We each had to sing individually and could not hear everyone else which so weird for a choir, but our musical director Richard managed so well to bring us all together.”

The Barnet Choral Society, which was established in New Barnet in 1940 – and has had four different names in the last 80 years – is proud of its history and determined to make up next year for its missed anniversary in 2020.

Ms Kirk, who has been chair for the last 19 years, will be standing down in January after the society’s final event of 2021, a Christmas carol concert on Saturday 11 December at St John the Evangelist, Friern Barnet Road.

Please note: There will be no interval during the evening and the performance will last approximately 90 minutes. In the interests of safety, BCS would appreciate it if the audience would wear masks throughout the evening and maintain social distancing.