Where have all the butchers gone? 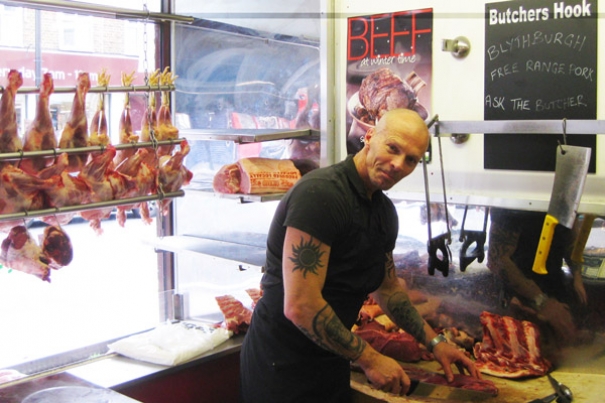 John Bye preparing meat at Butcher’s Hook, the last remaining butcher’s shop on Barnet High Street
Just imagine the bustle and activity of 1898 when such was the competition in the High Street of Barnet that shoppers had the choice of eleven butchers, including one pork butcher and two poultry dealers! Today only one shop remains, the Butcher’s Hook.

A fascinating display illustrating the changing patterns of retail premises in the High Street is to be unveiled at Barnet Museum on Sunday 29 June to coincide with the museum’s annual garden party.

“Tea in the Park” starts at 1p.m. in the Courthouse Gardens with music and refreshments and the High Street display will be opened at 2pm by the Deputy Lord Lieutenant of Greater London, Martin Russell.

Research for the project was carried out by a group of Barnet University of the Third Age members who surveyed the shops listed in Barnet High Street in 1898, 1914 and 2014. The display will feature an 1896 map of the High Street drawn by Derek Sagar, a description of the various premises, their street numbers and wherever possible photographs of shops then and now.

Jenny Kobish said their research showed that there were eleven butchers in the High Street in 1898 but this had fallen to nine by 1914 and only one remained in business today.

“Barnet was once a stopping place for animals being driven to market in London. Thousands of animals went through the town and many slaughter houses, butchers and drinking houses grew up to serve the trade.

“In 1865 Barnet cattle market was forced to move from the front of Barnet Parish Church to St Albans Road, where it continued operating until 1959.”

The names of some of the butchers, for example George Bennett, H. J. Carter and William Shepherd, were listed in 1898 and 1914.

The survey shows how other businesses have fared in the High Street since the 1890s and presents a comprehensive picture of the changes that have taken place in the number of drapers, public houses, banks, churches and places to eat.

As part of the project, all the known data about premises in the High Street has been entered onto a database which the museum hopes to make available to the public wishing to carry out family research.

The High Street map, which will be updated from time to time as fresh information is obtained, will remain on permanent display in the museum.