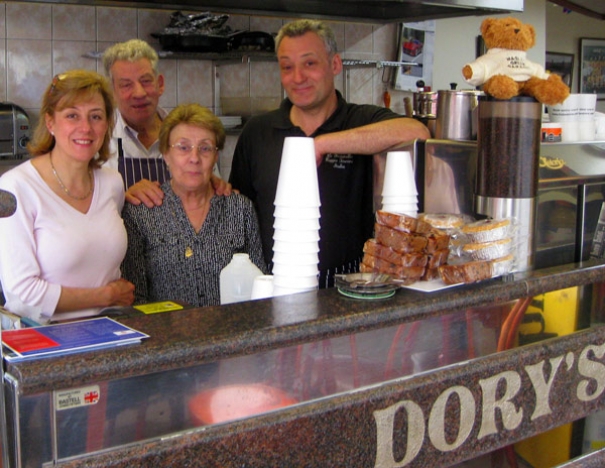 Tony and Dorina, their son and daughter, Giuliano and Angela, continuing a family tradition at Dory’s cafe
When customer satisfaction is the only protection against the tsunami of change that is sweeping through so many of Britain’s high streets, few Barnet traders can match the long-standing loyalty of local residents for the refreshments served at Dory’s cafe, still going strong and now in the hands of the third generation of an Italian family.

It was in 1956 that Ottorino Pellicci – whose name had been shortened to Dory – left his father’s cafe E Pellicci in Bethnal Green Road, and started running his own cafe next to Barnet Market at 3 St Albans Road.
Ottorini’s daughter and husband, Dorina and Tony, now help their son and daughter, Giuliano and Angela, serve up an endless supply of full English breakfasts, teas, coffees and sandwiches as well home-made dishes such as shepherd’s pie, steak pie and chicken escalope for lunch.

Angela says they find it so rewarding when customers tell them they are the third and sometimes even the fourth generation of local families who have enjoyed a meal or a quick snack in a cafe that they remember from their childhood.

“One couple here at lunchtime have been coming all the way from Hatfield for the last forty-seven years; my granddad would be so pleased to think we are maintaining a quality of food and service that can win such satisfaction and loyalty.”

Ottorino, whose father and mother opened their cafe in Bethnal Green Road in 1900, was one of a family of eight.  In 1956, when he set up in business on his own, the Barnet cafe was being run by the Mancini family.

Sometimes you find yourself serving a television star or celebrity

The week after Ottorino and his wife Crimene opened for business Barnet’s cattle market closed, but the success of the stalls market ensured a regular clientele.

Angela has fond memories of helping her mother and father, Dorina and Tony: “Back in those days there was a queue to get stalls at the market and trade was so good we used to get queues outside our door. Over the last fifty-eight years we have become something of an institution.

“Sometimes you find yourself serving a television star or celebrity, or it might be someone popping in who can remember my grandfather.  Dad still does most of the cooking – that is what makes a cafe like this so special, we prepare all our own food and that is what the customers appreciate.”

Caption:  Tony and Dorina with their son and daughter, Giuliano and Angela, continuing a family tradition at Dory’s cafe, St Albans Road, Barnet.

More in this category: « Pop-up to encourage revival Where have all the butchers gone? »