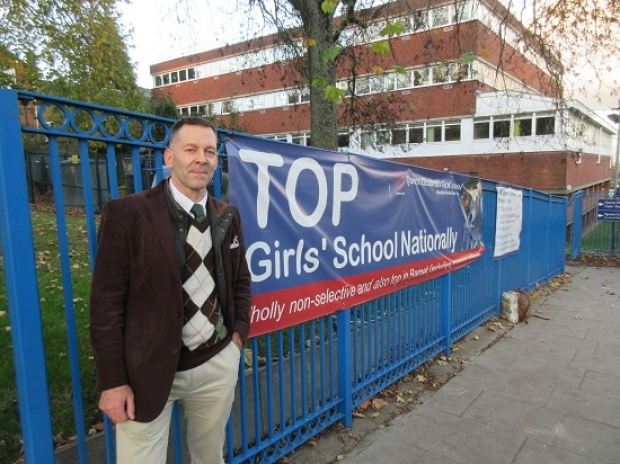 Without him knowing what was happening, past and present pupils at Queen Elizabeth's Girls' School, Barnet, were voting secretly for their popular history teacher and sixth form tutor, Marc Fielder, to become the 2020 London Secondary School Teacher of the Year.

“I was puzzled at first when I got the call, and the organisers were very cagey to begin with,” said Mr Fielder.
“I had no idea what had been going on. Apparently, it was all done on social media with the girls encouraging one another to vote for me and then ex pupils joined in.
“I could hardly believe it when the organisers told me that I had been voted top teacher of the year in London’s secondary schools.”

Mr Fielder, who has taught history at QE Girls for the last 27 years, missed out on the annual awards dinner which had to be cancelled because of Covid-19.
Instead the event was held online on the Facebook page of the children’s wellbeing charity, the KM Charity Team.
Totteridge Academy’s maths department won the teaching award for the 2020 team of the year.

Mr Fielder was a late entrant to teaching and his first and only fulltime post has been at QE Girls which he says he has found so fulfilling because of what he believes is the inspiring social mix of an all-girls school which is non selective and open to all pupils in its catchment area in and around High Barnet.
“I am very privileged to be teaching classes which have such a wide social, ethnic and religious mix and one which has become increasingly diverse, for example, with the daughter of a professional couple perhaps sitting next to the daughter of an asylum seeker from Afghanistan.”

Mr Fielder started work as a political researcher and was with the Royal United Services Institute in Whitehall for seven years conducting research into nuclear arms control.
“Defence and the nuclear arms industry are an all-male world which was off putting, and I did get very bored, so I started training to be a teacher.
“When I did my PGCE I have to admit I hated the teaching experience in schools and at the end of my course I did not bother applying for a job.

“Luckily, I had a very good tutor and as I was the last on the course without a post to go, he suggested I apply for a vacancy that he had seen at QE Girls’ School in Barnet. That was 1993. 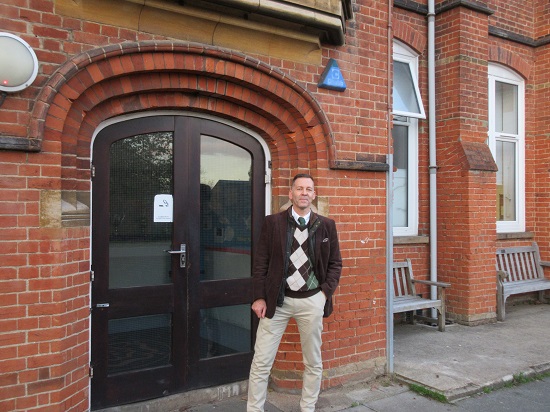 “When I walked into the school, I was greeted by the very first person I saw...and he turned out to be Nigel Royden who is still at QE Girls after all these years and who teaches media studies. After all, I am only the fifth longest serving teacher.
“The second adult I met was a woman in a red dress who was singing and swinging two maracas...and she turned out to be the head teacher, Libby Coleman, who said come this way.
“So after having worked previously in a white, all-male world of the military, which tends to be confrontational, and where I was the only non-public school boy, I suddenly found myself in a school environment that looked towards consensus and where the girls all seemed polite and confident, and were all from the local neighbourhood.”

Mr Fielder says his passion is classroom teaching and finding ways to inspire girls from such a diverse multi-ethnic and multi-religious mix.
“I use traditional English music, songs, poetry and literature to engage the class. I never cease to be amazed at the way the girls respond and how it helps them understand history.”
Mr Fielder has organised numerous school trips to the Great War battlefields which were always a highlight of the school year for many of the pupils.

To help prepare for a visit to the Thiepval war memorial he might get the class to study the life of George Butterworth, the famous English composer, folk song collector and country dancer.
Butterworth collected folk singing and dancing of rural workers, many of whom volunteered, as did Butterworth himself, who became an officer, fought at the Somme, and was killed, and whose name is recorded at Thiepval.
“His life tells the tragedy of the First World War and the folk songs and dance help the class relate to the history of those who lost their lives, and then they can see for themselves the name Lieutenant George Butterworth listed at the memorial.”
Another reminder of the wider cultural impact of the Great War is to explain that the Indian Army was largest component of British Imperial forces and that they were all volunteers.

The work of Thomas Hardy – and Tess of the D’Urbervilles – provides another link from the lives of Wessex farm workers to Indian history and literature.
To illustrate this, he contrasts the British film and television series about Tess with Trishna, a film with an Indian cast by the director Michael Winterbottom, which tells the story of an Indian young woman plucked from village life and mistreated by a rich entrepreneur.

Long before the recent focus on the Black Lives Matter movement, he was using music and songs to explore the history of the slave trade, taking advantage of recordings from the 1930s to 1950s of rural black communities in the deep south of the USA.
When he first played the negro spiritual, Trouble So Hard, recorded by the American folk singer Vera Hall, the girls sat in silence. He then played a DVD of the same song set to a modern dancing beat by Moby. One of the pupils said, “Stop it. He’s ruined it.”
“The class loved the original and hearing a scratchy recording of Vera. Through songs and music, they could hear the voices and the pain of a generation whose parents were slaves, so the pupils could relate to the children of slaves as they could to the lives of Indian soldiers.
“Thomas Hardy and the story of Tess, helps the understanding of children whose ancestors were Anglo Saxon, just as it does to those whose parents fled Afghanistan.”

Mr Fielder hopes lessons like this for 13- and 14-year olds might spur them on to take history at A level, a subject which he thinks has been bucking the trend and remaining popular.
Looking back on his life’s work, he recalled some of the tributes from past pupils. Recently two sent him a card that said, “We always enjoyed German history, and you have influenced the music we listen to”.
A cheekier riposte was a line to the effect that the class always knew his lesson would be a “complete joke” from the moment he entered the room – which could be interpreted as a compliment or taking the mickey.

Mr Fielder is due to retire in two years and in retirement may devote more time to trade union work with the teachers union, NASUWT, of which he is currently the assistant area secretary for Barnet and a case worker.
He is full of praise for the progress made at the school by QE Girls’ head teacher Violet Walker.
QE Girls has recently outperformed all other secondary schools in Barnet with a progress score of +1.11 – the highest level of improvement and is now in the top 0.4 per cent of all schools and joint 26th out of all 6,502 secondary schools in England and Wales.

Published in General News
More in this category: « Wanted: Barnet memories of going to the flicks Barnet's fallen comrades remembered despite coronavirus pandemic »